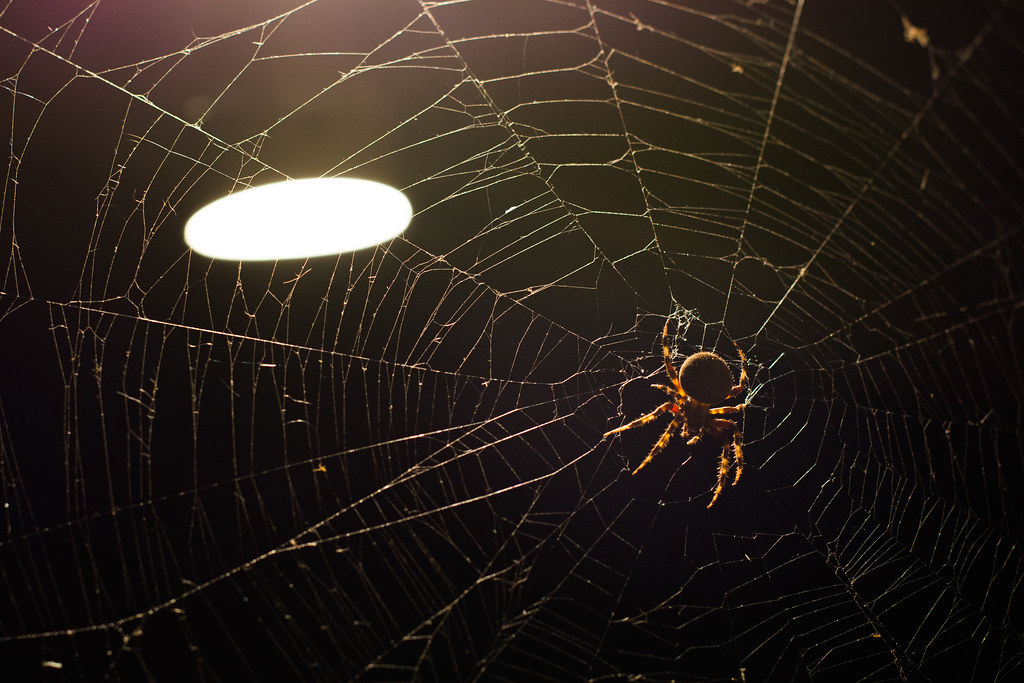 Each year we see these spiders pop up around our house en masse around the start of autumn, but they still surprise me a bit when I first encounter their massive webs. The one in here is about two inches in diameter (including the legs, not just the body) and while I’m not sure if it’s poisonous or not, I’m still more than a little inclined to maintain a respectful distance. I saw this spider when I was taking out the trash one morning, and of my reaction was something along the lines of “whoa.” The web’s proximity to our outdoor flood light made for a really cool backlit effect, and even though I was holding my infant son in one arm I ran to get my D200 and tripod to see if I could get a decent shot. And I did, but it wasn’t quite what I was hoping for. Truth be told I kind of forgot about my new spider friend until that night when I was working in my garage and noticed that he was not only still hanging around, but had his legs fully extended which made for a much more interesting picture. This time I put the 50mm lens on my D7100 so I would have more flexibility if I needed to crop the photo, and could also take advantage of its higher ISO capabilities. Instead of a tripod I just used a stepladder, and tried several angles to get the shot I was looking for. The tricky part here was getting my metering right–I tried Matrix and Spot, but those ended up either too dark or too washed out. Center-weighted got things just how I wanted them, and even though I did have to do a bit of Lightroom finessing (yay for graduated radial filters!) I came very close to nailing the shot I wanted right in camera. Turns out I didn’t even need the higher ISO of my D7100 since I shot this at ISO400, but still, it’s nice to know it’s there if you need it.