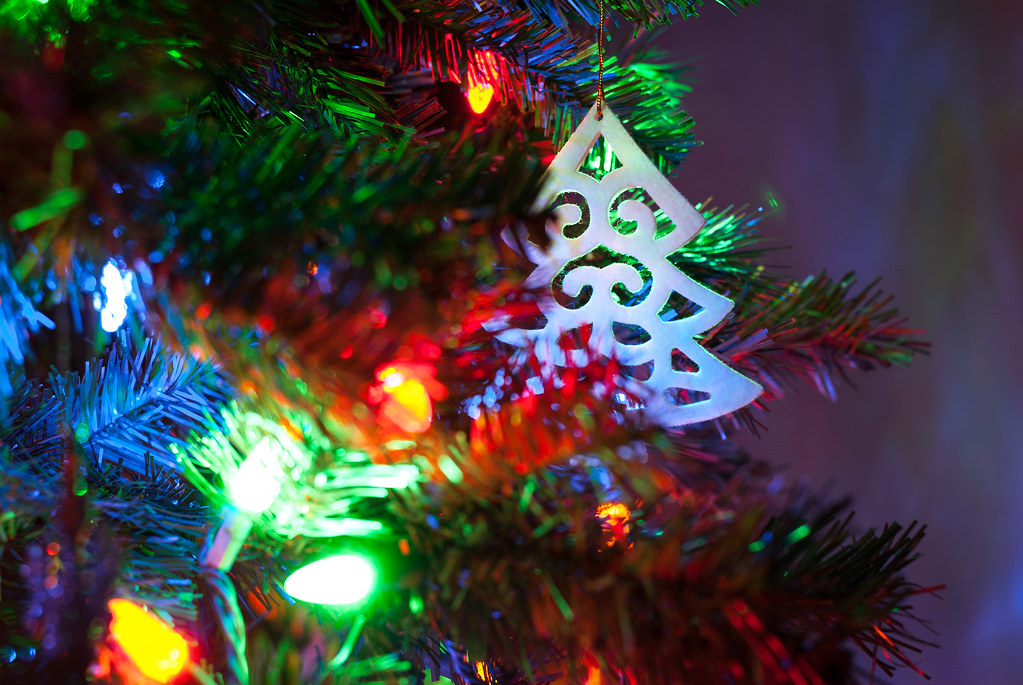 It’s a bit tricky to get photos that represent Christmas here in Oklahoma, or at least the traditional snow-covered-evergreens, kids-skating-on-ice, carolers-singing, mug-of-cocoa-by-the-fireplace Norman Rockwell-style version that many people think of at this time of year. While it is not exactly uncommon per se to get a storybook White Christmas around here, with highs anywhere in the 30’s to 50’s throughout December it is generally more the exception than the norm. So my challenge for this week, then, became one of capturing an image that represents Christmas given the constraints, not only of geographical location but of time, that I was facing. My solution was to shoot a picture of some decorations on our Christmas tree, but soon found that it was easier said than done.

I wanted to get a picture that felt cozy and evoked a sense of warmth and comfort, and to me this was best represented by a close-up image of our Christmas tree. I wanted to shoot it in the wee hours of the morning so I could get the glow of the lights without any other ambient lighting, and even though I was pointing my camera straight at some of the little colored bulbs I still had to use a tripod since the light output is so low. A few photos later I realized that shots of just the lights were not all that interesting, so I looked for a few ornaments to more or less anchor the photo and give the viewer something on which to focus. I liked this felt tree ornament, and shot it from a low angle to give it a more commanding presence in the frame. My hope is that the first thing you notice is the tree ornament, then the lights, and then the branches of the (fake) tree around it.

Taking this photo made me think of the artificial nature of everything around us, particularly at this time of year when we give, and ask for, so many man-made things. The Lord says in Matthew 24:25 that “Heaven and earth will pass away, but my words shall never pass away.” It’s ironic that when we celebrate the birth of our savior Jesus we often do it with man-made gifts that are ultimately going to turn to rust and ashes, when in fact the true meaning of Christmas is all about a relationship with our Lord. It’s an eternal gift He gave to us that will outlast anything we can possibly have here on earth. I hope, then, that this photo is just one tiny reminder of Christmas and the real meaning behind it all.