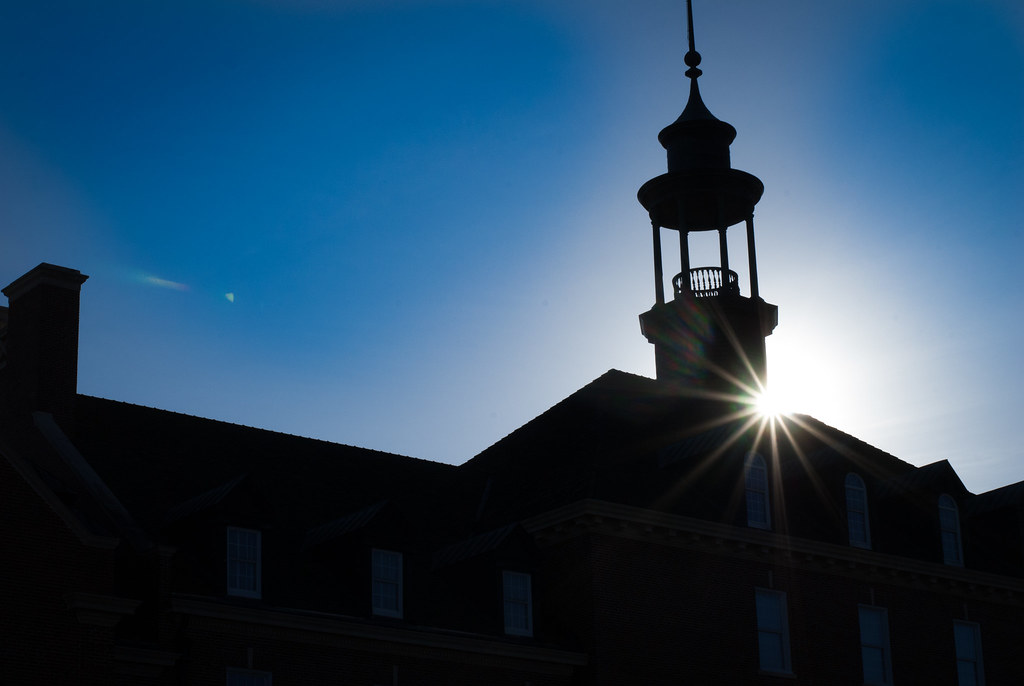 I’m not sure exactly why, but I like pictures that show star patterns around lights. A few weeks back I posted an image called Preparation, which showed some work lights with star patterns, and I have done this a few other times as well. It’s kind of a cool effect that does not require any special manipulation or trickery other than just knowing how to control your camera. To get the star patterns around any light, just stop down the aperture so it’s super duper small (I shot this at f/16, which is as tiny as my 50mm lens will go, but other lenses can go waaaay smaller). The hard part was figuring out where to stand to get the image I wanted.

Fortunately I could use the shadow of the tower to get a good idea of where to position myself. I wanted to get the sun to poke out right at the base of the tower where it meets the roof of the building, but instead of going blind by looking at the sun and trying to move myself until I was in position, I just turned around and found the ideal spot by looking at the grass. I faced backwards and walked around until the shadow of my head was right at the spot on the ground where the shadow of the tower met the roof. Then I turned back around, snapped one photo, and called it a day.

As a general rule I’m not a huge fan of altering my own images in post beyond simple color corrections. I don’t like adding or deleting elements, as it creates a false sense of reality rather than simply trying to express my vision for the image. In this case I made an exception, as the original photo was not at all what I wanted. At small apertures, especially facing a light source, all the imperfections in your lens will suddenly become visible: any dust, hair, or other particles sitting on the glass will show up plain as day. I used Lightroom’s Healing brush quite extensively to get rid of these, as well as the contrail in the middle of the sky. I also did a bit of coloring adjustments to get the sky a nice deep blue, and made the building itself a bit darker with some contrast changes. This begs the question, though: where do we draw the line when it comes to image manipulation? What is allowed and what should be forbidden? I don’t really have a good answer for that, but would certainly like to hear your thoughts in the comment section below.