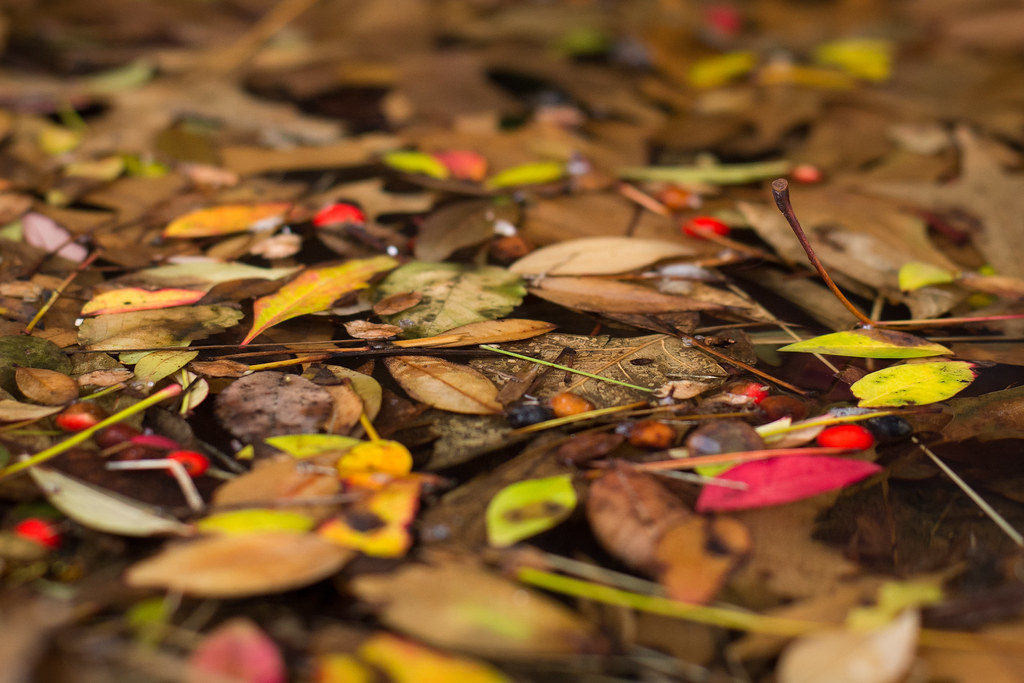 I look at this photo and still can’t believe it almost didn’t happen. Not that this picture is anything special really, but I do kind of like it and the cornucopia of colors swirling in the puddle–augmented by the leaf stem sticking up on the right-hand side almost like a punctuation mark on the whole scene. But when I shot this I was walking to my office about 9am on a dreary December morning and noticed a puddle right next to where I took a photo of some mushrooms a few months ago. It was cold, rainy, and though I had my D7100 + 50mm lens with me I was not really in a picture-taking mood. I just wanted to get inside and warm up, but a little voice over my shoulder told me to pause, set down my backpack (because briefcases are way lame), and just take a photo already. So I knelt down on the soggy grass and got to work.

I knew right away I wanted to use the leaf stem as a compositional element, but was not sure exactly how to use the rest of the photo to frame it. I shot a few pics with the leaf on the left-hand side, but it just wasn’t working out how I hoped. The colors weren’t as vivid, and I didn’t like the direction of the leaf stem–it was almost as if it was directing the viewer to gaze off the left-hand side of the picture. So I recomposed the shot (manually focusing again, because I didn’t quite trust the autofocus to nail the tip of the leaf stem) and was much happier with the results. And, as you might have predicted after listening to last week’s audio, I shot this at f/2.8 to make sure the DOF wasn’t out of control :)

The biggest challenge here was actually the editing. With so many buttons and sliders available in Lightroom it can be easy to go overboard, but I wanted to keep things reigned in while still getting a nice vivid image. Prior to editing the picture looked far too dull and lifeless, but that’s why I shoot in RAW: to have enough color data available to make the final image represent what I actually see in real life. Initially I had it way over-saturated, way over-contrasted, and even gave in to the temptation of Clarity Overload, but realized yet again that less is more, and finally settled on the version you see here.