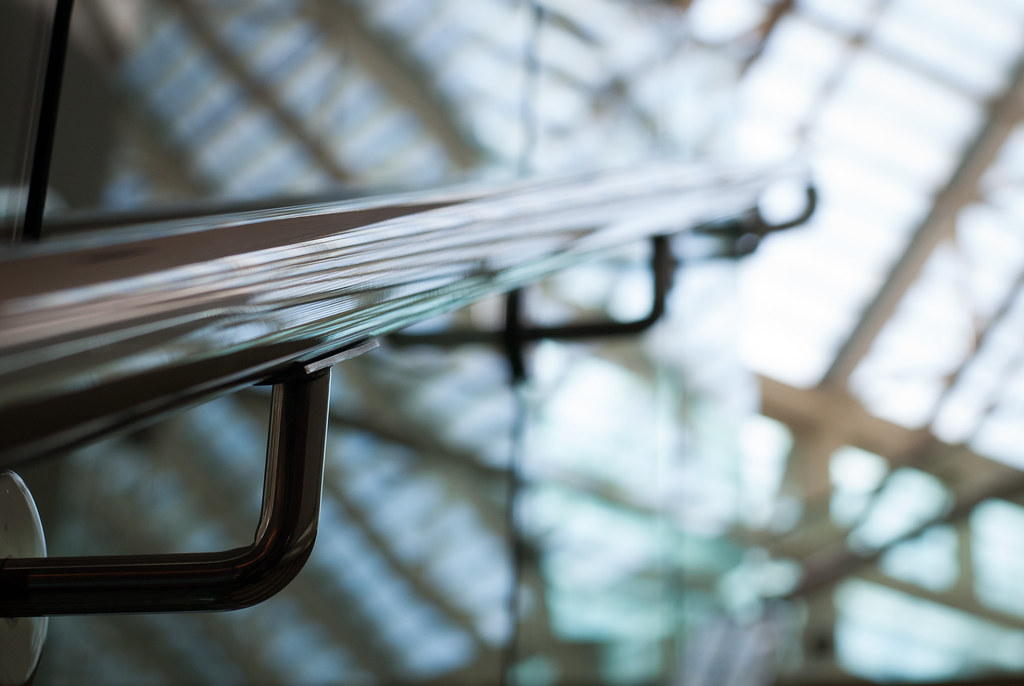 One of the architectural features of Oklahoma State University is the Noble Research Center, which I have walked past many times but never actually visited until recently. The south face of the building is dominated by a series of massive louvers which serve to create a fantastic sense of open space and scale in the inner lobby which makes the building ideal for photography. All the light and shadows playing off the various features inside work together to create an environment with so many photographic possibilities it’s difficult to know where to start. Unfortunately with a 50mm lens on a crop sensor camera, it’s a somewhat tricky proposition to capture the sense of grandeur and open air that is better suited for a much wider lens. I tried a few shots just looking up at the roof but those didn’t work at all, so instead I figured I would focus on one of the metal stair railings as a way of giving a bit of context to what would otherwise just be a photo of the ceiling.

I kind of like how the initial focus of the viewer is on the lower left, and then the eye should (in theory, anyway) follow the railing up to the top-right as a way of exploring the scene a bit. I shot this at f/4 to give a somewhat shallow depth of field, and there was so much light coming in that I was able to use ISO 200 to get a silky smooth image with virtually no noise at all. I think my favorite aspect of this image is that it introduced me to something new that has been right in front of my eyes for years, and in doing so kind of inspired me to seek out more of what OSU has to offer in the coming months.