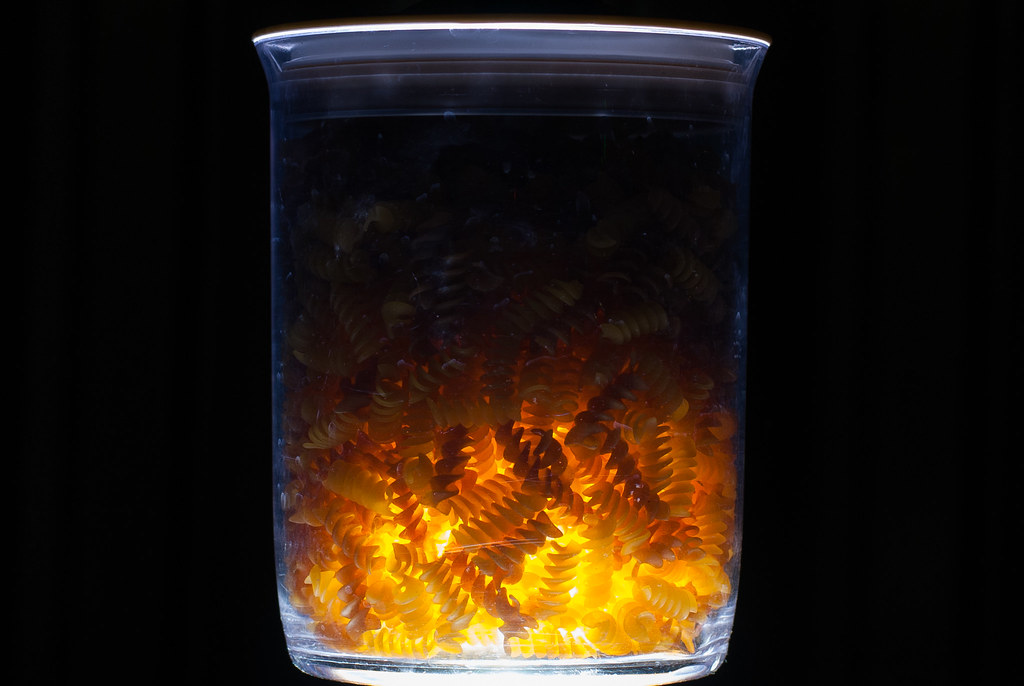 If you read this blog with any regularity you know that most of the pics I post are of existing scenes and objects, with very little manipulation on my part. But this time I wanted to try something a bit different and create a scene specifically to be photographed. And though the overall concept was, I believe, a success, I am not particularly happy with the picture itself for a couple reasons I’ll get to in a bit. However, to me this is more of a proof-of-concept than a photo of which I am genuinely proud, and I hope to try this sort of thing a bit more in the coming months.

I was in the kitchen the other day and as I picked up a jar of pasta I thought it might make an interesting photograph if I could get the lighting right. I realized I could balance the entire jar on top of a flashlight, which meant the only tricky part would be finding a time to actually take the picture. The next morning I got up early, set the jar on the flashlight, positioned my camera on a tripod, and took a few shots. The light was so bright that a long exposure of eight seconds illuminated too much of the pasta, so I shortened the shutter speed in successive shots until I got what I wanted. This particular picture was a three-second exposure at f/4.8 and ISO 100, and I had to clean up dozens of smudges and fingerprints on the jar in Lightroom as well as bring out a bit of the shadow detail and some other minor adjustments. All in all it was a fun experiment, and as my coworker Gina suggested, maybe I could try filling the jar with other objects and see what happens when they, too, are lit from below. Hmm…so many possibilities… :)