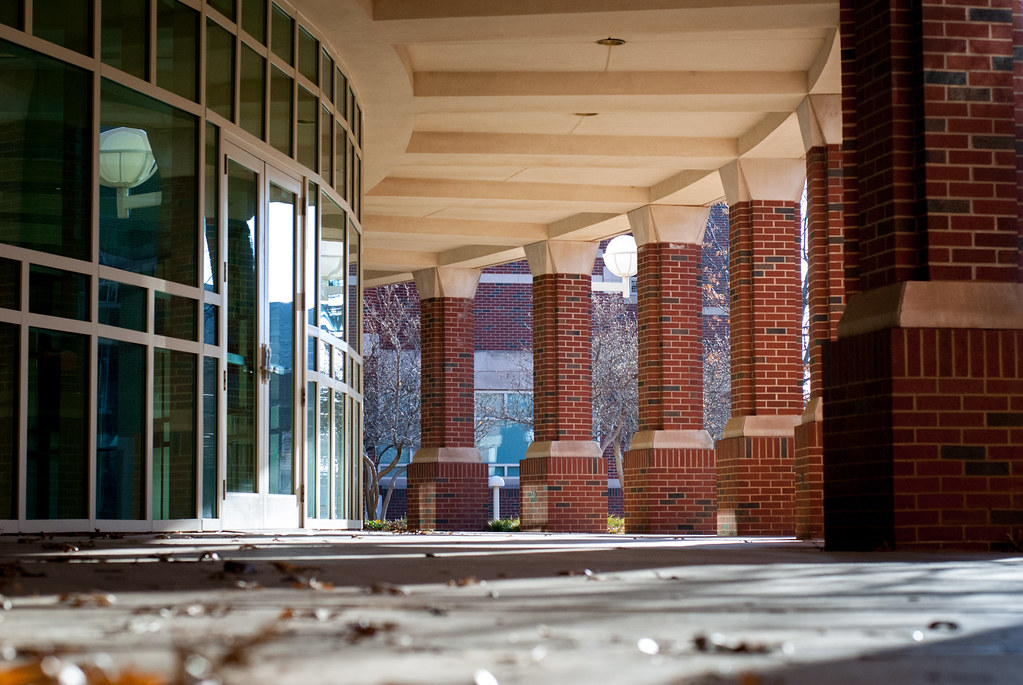 Taking this photo was another exercise in pushing aside my misgivings about taking photos in public where (gasp!) someone I don’t know might see me. I had just come out of a meeting across campus and was walking back to my office when I came across this scene that I thought would make an interesting picture. But taking shots like this from eye level is, as Mr. Crocodile would say, so uninspiring. The solution? Get on the ground and take some shots! No big deal, right? I must say, this sort of thing is getting a bit easier for me, but I’m not quite there just yet.

A few people did walk past as I was lying prone while fiddling with control dials on my D200, but I don’t think they cared at all. And in the meantime, I got a shot that I kind of like. I toyed with a few shots at f/8 but rather liked this one at f/4.8 because it had a little bit of depth of field going on. The leaves in the foreground add a nice touch, but a big part of me wishes there was some sort of grand vista in the background instead of another brick building. I was hoping to get a shot that conveyed some kind of visual perspective, and to a degree it worked…but that building back there. Oof. It’s also got a strange blue-ish color cast that I could do without, but that’s kind of nit-picking.

One thing I do want to note about this photo is the position of the light, and it was something to which I carefully paid attention as I set up the shot. The sunlight is actually coming from above and to the right, and I made sure to put my camera in the shadow of a pillar on the right-hand side that you can’t actually see. This allowed me to get a properly-exposed photo even though the pillars were being lit from the back side that you can’t actually see here. It was a fun little exercise in paying attention to lighting, and a reminder for me to always pay attention to things like that if I want to really capture my vision for a given photo.