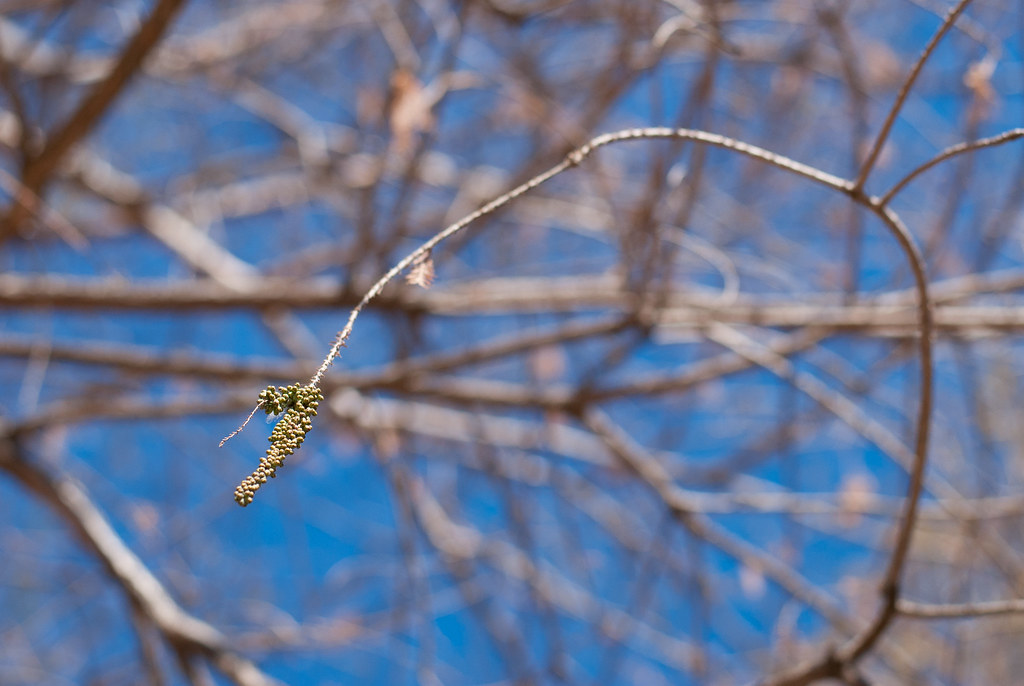 This came about when I had to run an errand at work, and brought my camera with me in case a photo-op presented itself. I was walking past a pond on campus that I have been by dozens, if not hundreds of times, and figured (incorrectly) that there was nothing interesting worth photographing. Then I remembered a suggestion my coworker Gina told me a long time ago, which was to simply look up. So I did, and lo and behold, I saw this tiny patch of green hanging down from the branch of a dormant cypress tree. I took this photo in early February, a time that I would not normally expect to see things turning from brown to green. And yet, there it was: a patch of life either hanging on through the winter or popping up before anything else. I thought it might be too far away to get a good shot, but it worked out OK and I didn’t even crop it very much.

To get the shot itself I pointed my camera up and used manual focus, as I didn’t trust the autofocus to be able to track the subject or even lock on adequately at all. Perhaps a better camera like my D7100 would have been able to do this, and my trusty D200 showed some of its limitations in this situation for sure. The wind was blowing just a bit, so I took several shots as I brought the object in and out of focus, and even though my depth of field was just a tad too shallow (the tip of the greenery is just barely out of focus) I think it turned out decently enough. I made the classic mistake of shooting at f/1.8, which really is too wide for a lot of the things I like to shoot, and stopping down a bit would certainly have helped. At this point I’m not sure if I will ever learn to restrain myself, but I’m going to keep on trying :)