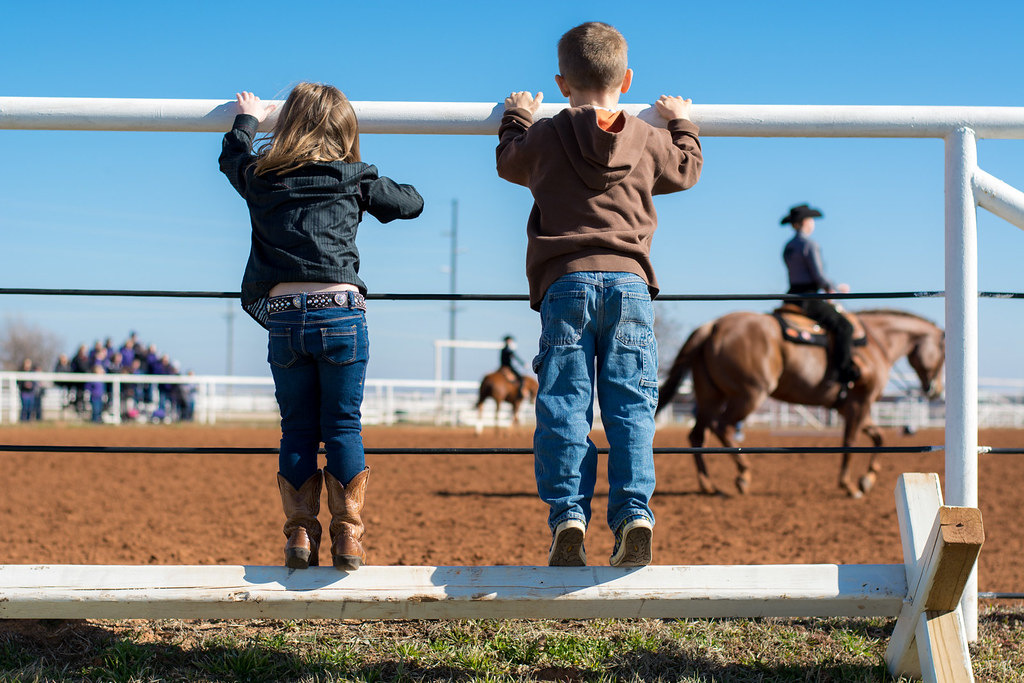 I often write about how the photos on here are taken in moments of unplanned serendipity, and to a certain degree this one was too. But part of this was, while not exactly planned, certainly intentional. First, a bit of background: Several times a year my wife and I take our kids to the OSU Equestrian shows as a fun way to get out and see some talented young performers compete against rival teams from around the country in a sport that doesn’t get nearly the same amount of attention of football, basketball, or anything that ends with the suffix -ball. When we went out a few weeks ago I brought my D7100 + 50mm to take some snapshots, but also to try and get a photo like this. I had a vision in mind for the type of picture I wanted to get: cowboy boots on a fence with some horses in the background. I didn’t exactly plan on taking a shot of my kid and our friend’s daughter, but when I saw the two of them on this fence looking out at the competitors I could hardly resist the urge to start clicking away on my camera.

I only took a half dozen shots, mostly because kids are fast and rarely stay in one place for long. And, as I found out, neither do horses. I was really hoping to get a picture with some activity in the background to give a bit of context to the onlookers, and as luck would have it one of the riders was maneuvering her horse in just the right spot for me to take this photo. A half second later the horse was behind the fence post, and then out of the frame entirely–as were the kids, since they soon became more interested in jumping off the fence and seeing who could get the most distance.

On my last post I emphasized the importance of understanding fundamentals of photography such as composition and framing, and practicing them whenever possible. This shot, to me anyway, represents why these basic elements are so important. I was able to unconsciously construct the photo I was hoping to get, simply because I went into the situation knowing things like what aperture, ISO, and shutter speed to use (f/2.8 to get some depth of field, ISO 100 because there was a ton of daylight, and a super fast shutter to freeze the motion). But more than that I knew that I had to kneel down, move around, and wait for the right moment to get the shot I was looking for. I don’t say this to heap praise upon myself (far from it, to be honest) but as an illustration of why the fundamentals are so important: so that you know how to do what you need to when the moment strikes.

Finally, I suppose it’s fitting that this photo marks two years of me doing Weekly Fifty. If I go back and look at some of my earlier pictures, it’s clear that I often had no clue what I was doing and certainly very little sense of composition, framing, emotion, storytelling, or even the basics of exposure. I did this blog as a way to explore the Lord’s creation through my camera lens, but also to force myself to learn the craft of photography. This picture, in a small way, serves as a landmark to show me how much I really have learned but also just how much more there is to know.

Here’s to a fantastic journey, and many more years to come…