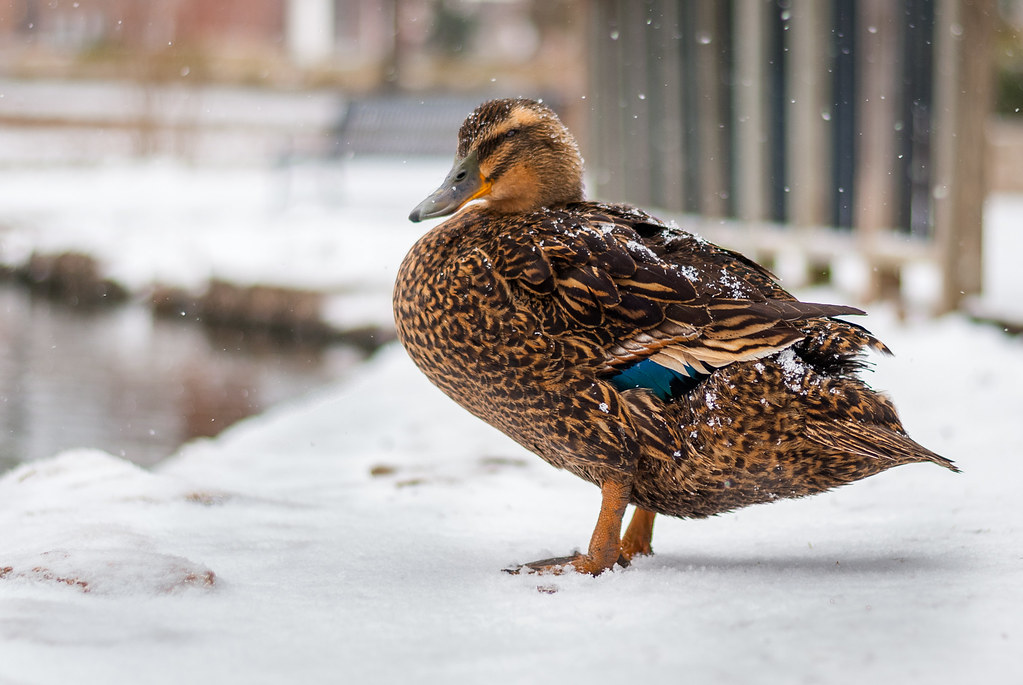 Right off the bat I want to make it clear that this was not the photo I had intended to take when I went out in the snow with my camera. Not even close, to be honest. I was really hoping to get an image with snowflakes swirling around, not unlike a few photos I have taken in past months wherein you can see raindrops falling (appearing as streaks across the frame) in front of or behind the subject. We don’t get a lot of snow in Oklahoma, and on this particular day I happened to have my camera with me right as a bout of wintry mix started falling so I ran outside to capture what I could. I even brought my cheesy little travel tripod (aka World’s Worst Tripod) with so I could get a half- or one-second exposure in order to capture the snowy streaks left by the flakes as they meandered towards the ground.

That was my idea, anyway. Let’s just say it didn’t exactly work out.

The fatal flaw in my plan, as you have probably guessed, is that snow is very very reflective. Even on an overcast day, the snow on the ground reflects so much ambient light that it’s like shooting at noon on a summer day. The only way to get a decently long exposure was to stop my lens down all the way to f/16, set my ISO to 100, and even then I was only getting about a 1/8 second shutter–way too short to capture falling snowflakes, though it would have been plenty for getting some raindrop streaks. To get a decent image I really should have had a Neutral Density filter, but alas, the only ones I have are for my 35mm lens (note to self: buy an ND filter!)

I tried a few shots but quickly realized that my lack of a Neutral Density filter along with my terrible tripod meant that I was never going to get the shot I was hoping for. So I did what anyone on the OSU campus would do when looking for a picture: go to Theta Pond and find some ducks! It’s a bit cliche but I didn’t want to leave empty-handed, hence this duck photo. It’s nothing special, but sometimes you just gotta do the best you can with what you have. The lessons I learned were more valuable to me than the photo itself, but I’m posting it anyway because it serves as a reminder to me that sometimes you really do need to have the right gear to get the shot you want :)

Incidentally, if you listen to the audio commentary you’ll hear a bit at the end when I mention the eye of the duck which you can’t really see on the original file. If you’re curious, here is the original file for comparison.