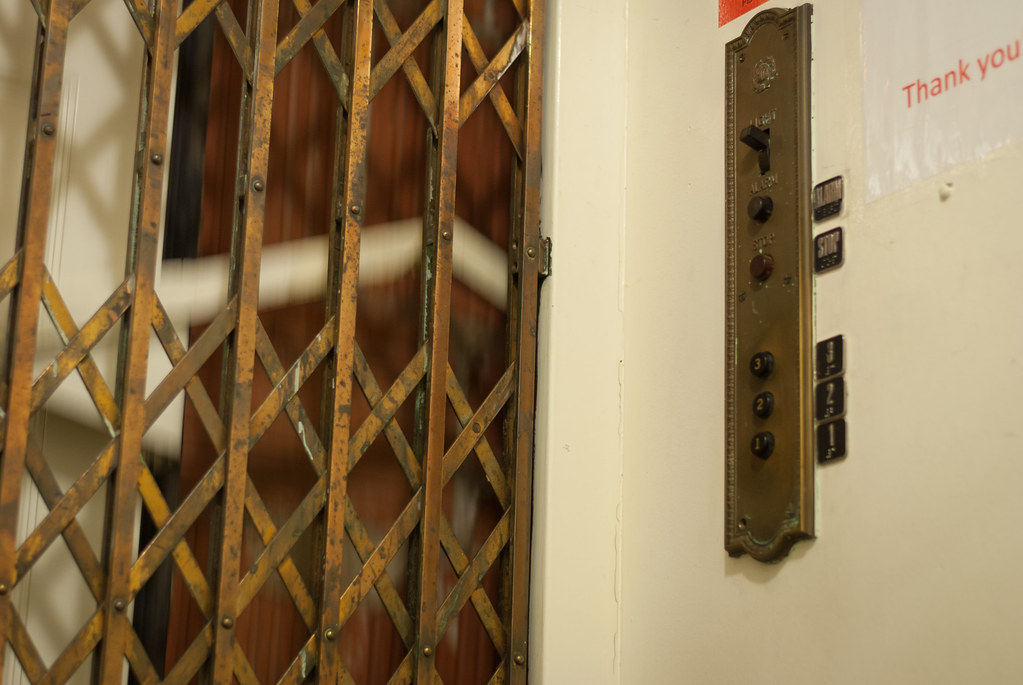 This is a variation on panning, a technique I have explored before here on Weekly Fifty and continue to enjoy practicing whenever possible. But this time I switched it up a bit and tried something a bit different. First, a bit of background: the elevator in my building on campus is so old it’s listed on some kind of obscure historical registry. It’s not the most convenient transportation mechanism, but it does feel a bit like you’re stepping back in time when you set foot inside it. To enter you have to first open a massive door and then slide a collapsible gate which you can see here. The elevator won’t move unless both doors are closed, which causes problems if someone gets off the elevator and forgets to shut the inner gate, leaving would-be elevator riders on all other floors stranded. Some might say this old wreck needs to be replaced, while others would likely respond that it merely adds a touch of character to our building. I’ve worked here almost two years and I’m not quite sure where I fall along that spectrum just yet :)

I’ve often thought about how I could capture a bit of the essence of this elevator with my 50mm lens, but one problem its that the field of view is so narrow its usefulness is severely hampered in small spaces like a six-by-five-foot lift. I’ve taken a few snapshots of the mechanical buttons, but that never seemed to do justice to the, um…essence of the elevator. A few weeks ago it finally hit me: why not try a shot while it’s actually moving? I shot this in the morning before anyone else was in my building, and rode it from first to third floor a few times while snapping a lot of pics at f/1.8, 1/20 second, ISO 200. With no tripod I had to shoot this handheld, so of several dozen shots only two or three were clean enough to clearly show the buttons and demarkations on the side. I have since thought about going back and re-shooting it with a tripod but I’m pleased with the photo itself and would rather try other shots based on what I learned here than go back and re-create something similar just to get it a tiny bit more sharp.

My goal in this pic was to not only show the buttons (which give a sense of how old this thing is) but the gate and the passing innards of the building itself. It’s just not something you see everyday, and while a static shot would have likely sufficed I thought it was cool to get a sense of motion to help the viewer feel as though he or she is actually riding this rickety rush bucket. I mean, classy work of engineering.