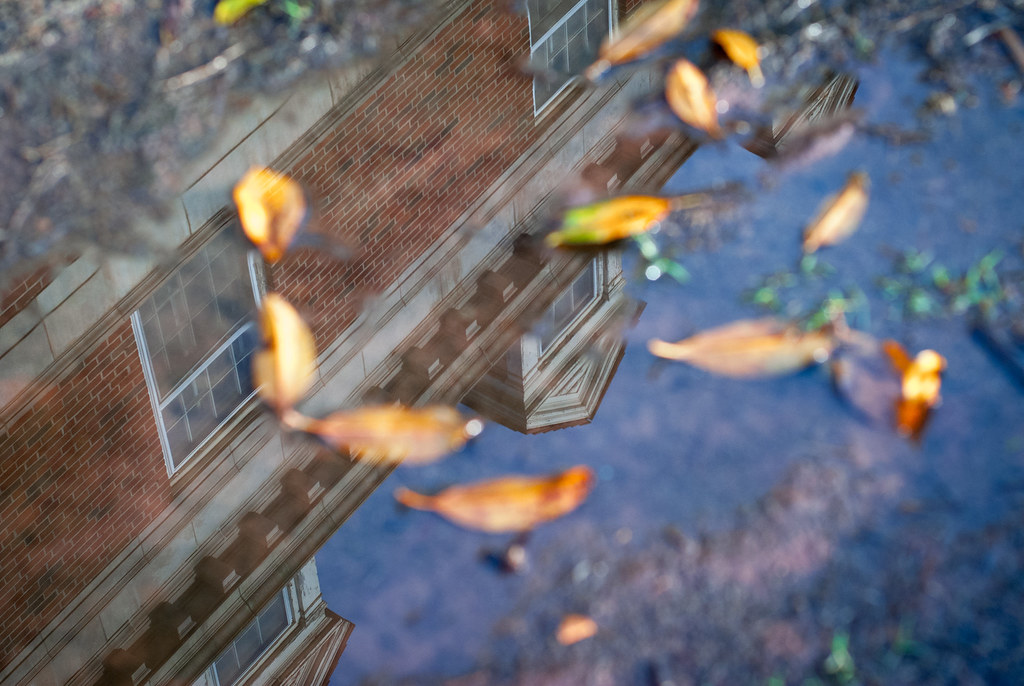 This is a photo I’ve been trying to capture for a while, but never quite found the right look that I was hoping for. The basic idea behind this picture is to capture a subject via its reflection in a puddle–a simple-sounding task that ended up being a bit more complicated than I thought. Not in this particular photo, but just the overall concept proved trickier than it seemed at first. It’s not difficult to find puddles on rainy days, but I had a couple things in mind for the photo I was trying to get:

Almost every time it has rained in recent months I have kept my eye out for these various elements when passing puddles, but while one or two were usually easy to see I soon discovered that to get everything to happen at once was a bit of a long shot. When I saw this puddle after a recent bout of rain I thought I had hit the jackpot, except for the final element: with no humans wandering by, I was forced to make do with one of the buildings on campus (the same building from this photo I posted about a year ago). The reflection was giving my autofocus a bit of trouble so I used manual focus instead, and shot at f/2.8 to get a shallow depth of field though in retrospect I think that was a bit too wide. F/3.3 or f/4 would probably have been a bit better since they would have shown the yellow leaves a bit more clearly, but overall I’m happy with how it turned out.

Incidentally, I titled it “Bygones” because the photo was taken on the final day of OSU’s 2014-2015 school year. I thought the idea of a reflection picture was an appropriate way to commemorate the occasion.