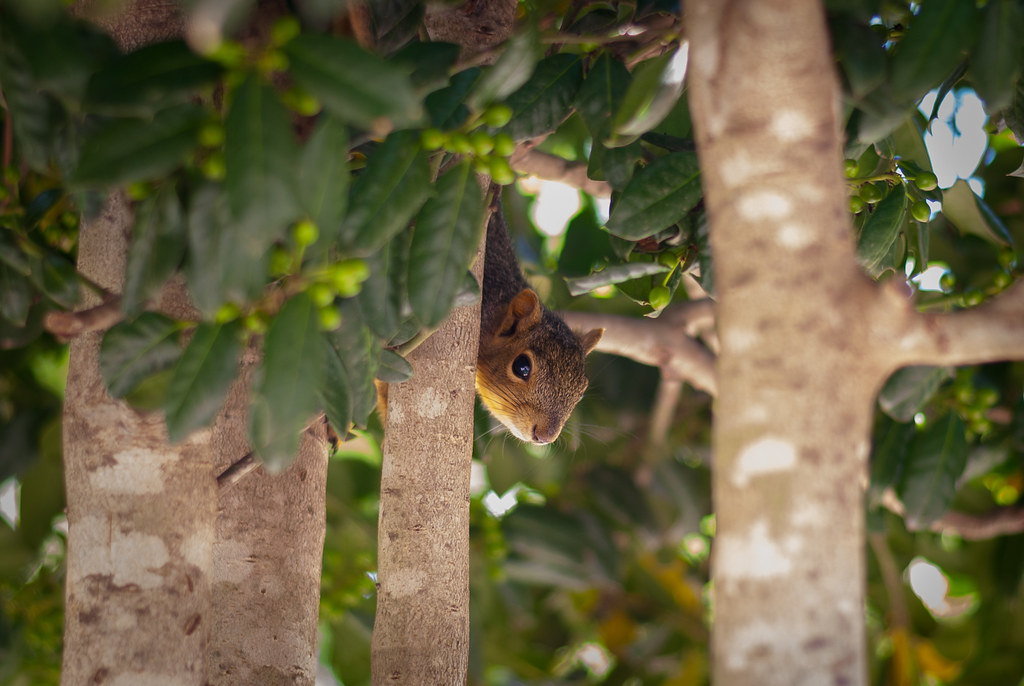 This is one of the most unique examples of photographic serendipity I have collected in my personal portfolio, and I still can’t believe it actually worked out. I was out shooting a few pics for a Digital Photography School article on using the Program Automatic mode on a DSLR camera when I came across this skittish squirrel running up and down a few small trees. I watched him dash up this young magnolia tree, seeking sanctuary from a pair of furious mockingbirds nearby, and waited a few minutes to see if he would come back down. A bit later I saw him poking his head out of the tree canopy so I raised my camera, focused, waited a bit more until he crawled a few more inches down to have a look around…and quickly fired off one single photo. I don’t know if it was the sound of the shutter or a sense that the mockingbirds were not going to leave him alone, but he immediately dashed down and ran off to another tree close by.

Much to my dismay when I peeked at the image on my viewfinder I realized it was a total loss. The image was way overexposed because the aperture closing mechanism on my lens jammed (an occasional problem I have thanks to dropping my camera on a concrete floor a year ago) and one look at the histogram convinced me it wasn’t even worth trying to salvage:

A while later I came back to the photo and figured I might as well give it a shot and see what could be done. Much to my surprise there was enough color data captured in the RAW file to do quite a bit. Lowering the exposure 2.5 stops, dropping the highlights, and a few other edits later (as well as some tweaking with the adjustment brush) resulted in a photo that was not only quite usable, but not that bad overall.

The most important takeaway from this is one I keep coming back to: shoot in RAW! Storage space is cheap, and you never know when all that extra data might come in handy. Incidentally this was a 12-bit (not 14-bit)  RAW file, and I know there’s a lot of debate over which one is better, but seriously…if I can salvage this much from a 12-bit RAW file (taken with a 10-year-old, 10-megapixel Nikon D200) I don’t see any reason to shoot in 14-bit.

Alright, enough techno jargon. If you’ve read this far, time to shut ‘er down, grab your camera, and go out there and take some pics! You never know what you might end up with :)

ps. The title of this week’s photo is a nod to Star Wars Episode IV when Obi-Wan meets R2-D2 for the first time. I imagine whatever was going on in the mind of this squirrel is similar to whatever was passing through the circuits of our favorite little R2 unit–the blue one with a working motivator :)