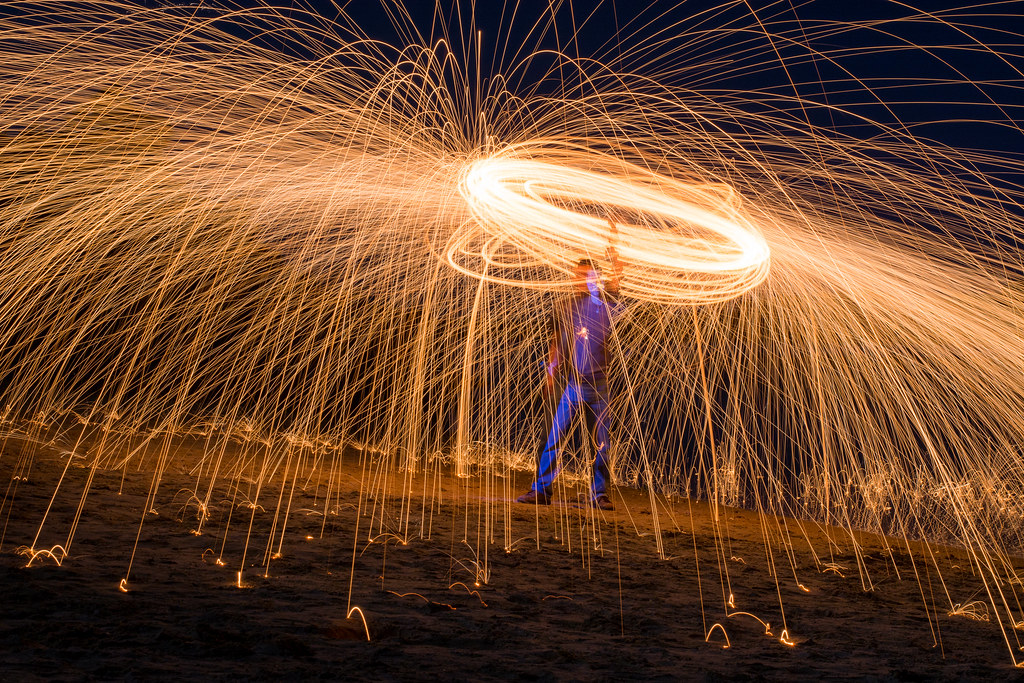 This is a shot I have had in mind for a long time, and was able to finally get it thanks to some help from my brothers Phil and Tom on our recent family vacation. It’s a particular style known as Steel Wool Photography and ever since I saw a few examples several months ago I have wanted to give it a try. When we headed up to our annual trip to Milford Lake in central Kansas we went to the beach and spent about a half hour playing around with different compositions until we found a few that we liked. The basic idea here is pretty simple, but takes a bit of planning to pull off along with the following sundry items:

All the above items can be bought for less than $10, and after that you just need a dark night and some open space to play around. The spark trails come from the steel wool itself: light it on fire and it will start to glow, and then spin the contraption around to create sparks that fly out in all directions. We took several initial shots that ended up looking like glowing circles or giant spark-flinging springs hovering on the beach (you can look at a few examples on my Flickr page), but eventually we came up with the idea of having Tom stand in one place and spinning the whisk around above his head.

To get this particular shot I had Tom stand about 30 feet away and hold very still while swinging the smoldering steel wool above his head. I set my D7100 + 50mm lens combination on a tripod and used an exposure of 30 seconds at f/13, ISO 200. This was the fifth or sixth photo we took during our experimentation session, and I was quite pleased with how it turned out. You’ll notice a strange glowing effect on Tom’s face if you look closely, which came about by way of me running up to Tom after I clicked the 30-second shutter and shining a dim flashlight on various parts of his body. The small glow in the center of his chest was from when he initially lit the steel wool with the lighter, which kind of looks like some kind of video game effect. My idea was to make it appear as though Tom was standing perfectly still along with a spiral of sparks and flames above him, but the finished picture looks a bit off because, let’s face it, it’s hard to stand perfectly still for 30 seconds while twirling a red-hot spark-throwing kitchen utensil a foot from your face. Part of me thinks this is what a Final Fantasy summon spell would look like in real life too :)

I was really excited to get the opportunity to try a few shots like this, and look forward to doing it again and refining what I learned on this initial trial run. Many thanks to Tom for doing the gruntwork and and Phil who helped coordinate everything while also taking some cool shots with his D3200 + 35mm lens. Also thanks to Prodigy for giving me the idea for this picture’s title.