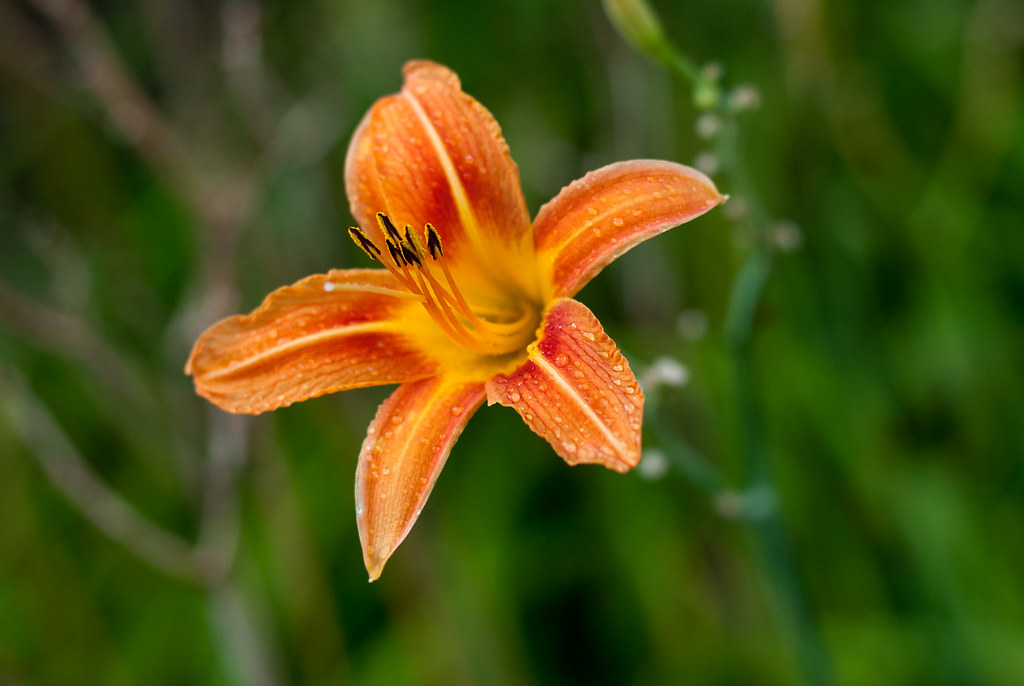 Right now you might be thinking “What’s up with all the flower pictures lately?” And to be honest I’ve been wondering the same thing myself since I don’t normally go around taking photos of flora. But since the whole point of Weekly Fifty in the first place was to help me get out and shoot more photos in order to build my skills as a photographer, this second flower picture in as many weeks fits the bill quite nicely. I see it as a refinement of last week’s Starburst picture, which was itself inspired by another flower picture, which probably came about as a result of seeing other flower pictures, and you get the idea. Photography, to me, is a continual process of improvement and the latest fruits of my own personal process are what you can see in the above yellow-and-orange image. In that sense, think of this as the second in a two-part series and see if that helps :)

A few days after I shot the Starburst photo we had one of those rainy, overcast days here in Oklahoma that would seem much more appropriate for some place like Seattle. Those days are my favorite kind of weather for several reasons, one of which is they create such incredible lighting conditions for photography. So I grabbed my D200 + 50mm combo and went on a very short walk to see what I could see, and not two minutes later I came across this flower just begging to be photographed. This time I took my own advice and shot at f/2.8 instead of f/1.8 and tried to get an interesting composition as well, and I am extraordinarily pleased with the result. The overcast sky gave a nice even light with no harsh patches of brightness and shadows, and a light drizzle added a few touches of water drops that gives the whole scene a nice bit of added texture. I also like how the bright orange and slightly subdued yellow contrast beautifully with the dark green background, which really helps to bring out the color in the main subject. Finally, the leaf with drops in the foreground is clearly the focal point of the image but the tips of the flower pistils are tack sharp as well, which was a very welcome coincidence. I certainly wasn’t planning on having those be in focus but am pleased as all get out with how things turned out.

This might very well be my second favorite flower picture I have ever taken, right behind my shot of a coneflower I took almost exactly one year ago under very similar overcast conditions. And it was all a direct result of taking what worked and what did not work about last week’s Starburst picture and trying to learn a few things from it.