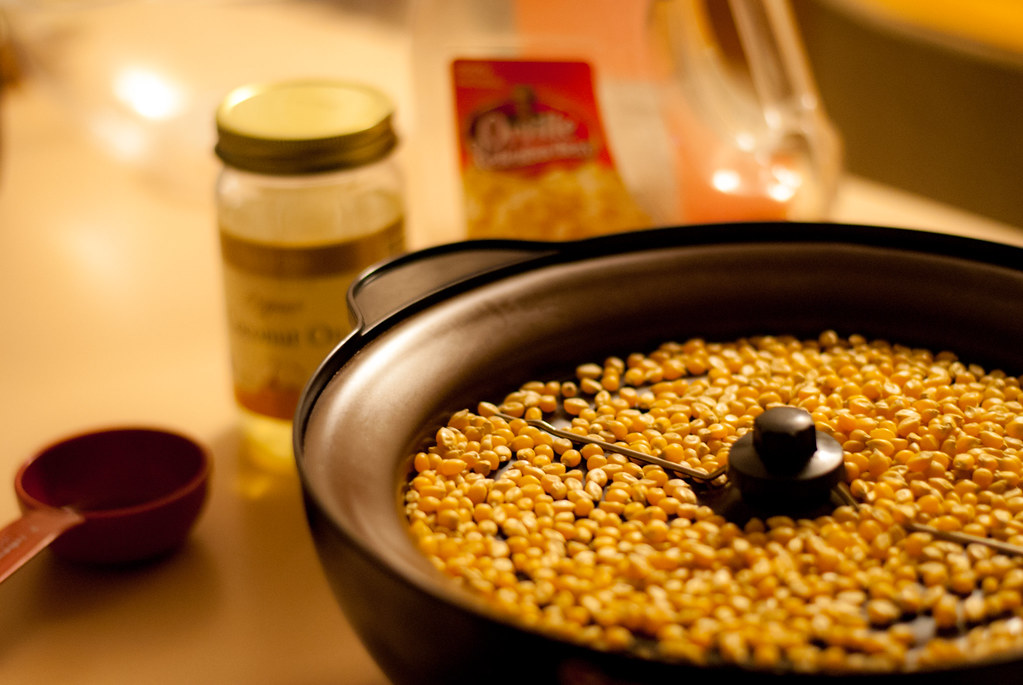 Unlike most of the photos I post here on Weekly Fifty, this one actually has a bit more personal significance beyond “Here’s a cool photo I took.” What you’re looking at is a popcorn maker, a jug of popcorn kernels, and the lynchpin that binds the whole operation together: a small jar of coconut oil. For years my wife and I have made homemade popcorn to share while watching Netflix after a busy day, and we have tried all sorts of different methods to tweak it and improve the taste. Not that there’s anything wrong with a bowl full of puffy popcorn by itself, but we have learned a thing or two about getting it just right. One evening recently when we made yet another batch I thought it would also be an interesting picture, and the result is what you see here. But before I get to an analysis of the picture itself, here’s a few things I have learned over the years to help you arrive at that perfect batch of homemade popcorn:

• Use coconut oil instead of traditional vegetable or canola oil

• Use Orville Redenbacher’s original kernels. Never go with Jiffy-Pop or other off-brand kernels

• Use real butter instead of margarine

That’s about it, really. Sometimes I like to dress up popcorn with seasonings and flavored oil, but to be honest the best is really the simplest. On a recent evening after our kids were in bed, dishes were done, clothes were folded, and plans were made for the following few days, we sat down to watch another episode of Prison Break with popcorn and our favorite drinks: Izze sparkling juice. Before I plugged in our trusty popcorn maker I wanted to capture the scene with a picture, so I grabbed my D200 and took a few shots at f/1.8, ISO 400. Since there wasn’t much light and I didn’t want to turn on any more lest it wash out the scene, my camera metered a shutter speed of 1/20 second for a good exposure which is not very good when shooting handheld without image stabilization. To ward off any potential hand-shaking-induced blurriness I took several shots hoping one would turn out, and lo and behold…one did :)

I did move the background elements a bit in order to get a better overall composition, and I purposely left the white balance a bit on the yellow side when I adjusted the RAW file in Lightroom. I wanted to evoke a comfortable homely mood with this, and I hope I succeeded. And as I type this I’m getting kind of hungry for another batch of popcorn. Time to bust out the popper!