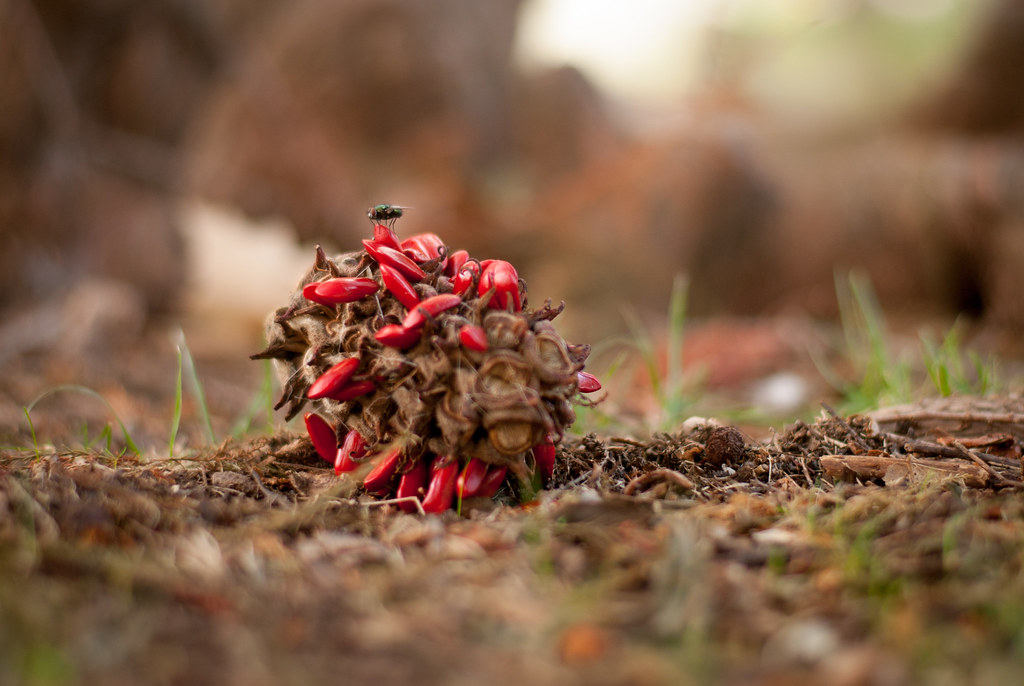 In a recent post I suggested that one way to get inspired to take pictures is to simply look at more pictures, and one of the best ways to do that is by signing up for an account at Instagram, Flickr, or some other type of online photo-sharing-slash-viewing service. My cousin Beth, for instance, takes all kinds of amazing images with little more than an iPhone and an Olloclip:

Looking at her photos and many others on Instagram has helped inspire me to find new and creative ways of using my own camera, and even though I don’t have any gear capable of taking true macro shots I enjoy looking at her pictures to get ideas for my own photography. Case in point: this week’s image which you see at the top of the page of a fly resting on a magnolia seed pod. As I was biking across campus on my way to work recently I noticed several of these pods on the ground and though I’d stop and see if I could get a few good shots. Seeing these brown hulls with red seeds poking out is kind of a unique experience that only happens during a short window of time each autumn, and I wanted to capture their surreal beauty with (what else?) my go-to D200 + 50mm lens combo.

Trouble is, this lens has a minimum focusing distance of about 1.5 feet, which means macro shots are out of the question. But when I saw a fly perched atop this seed pod I wanted to try getting a shot of it despite not being able to get very close. The problem then became one of framing: how should I position the subject in my picture so as to have maximum visual impact, and also make sure the fly stood out from the brown background? I didn’t have much time to work with since a) I was on my way to work and b) the fly was likely to take flight any second, so I laid on the ground and scooted as close as I dared without disturbing the insect, opened up the aperture to f/1.8 to get as thin of depth of field as possible, and fired off a couple shots.

The result, while being inspired by Beth’s picture, is different in several ways: the fly is one aspect of a bigger overall composition and almost serves as a secondary focal point to the seed pod itself: many viewers might first notice the seeds and only then realize there’s a fly on top. There’s also some foreground and background elements to give the picture a greater sense of context, and the green grass helps add a bit of color to what would otherwise be a rather dichromatic image. All that being said, I do think a set of Kenko extension tubes would be pretty cool :)