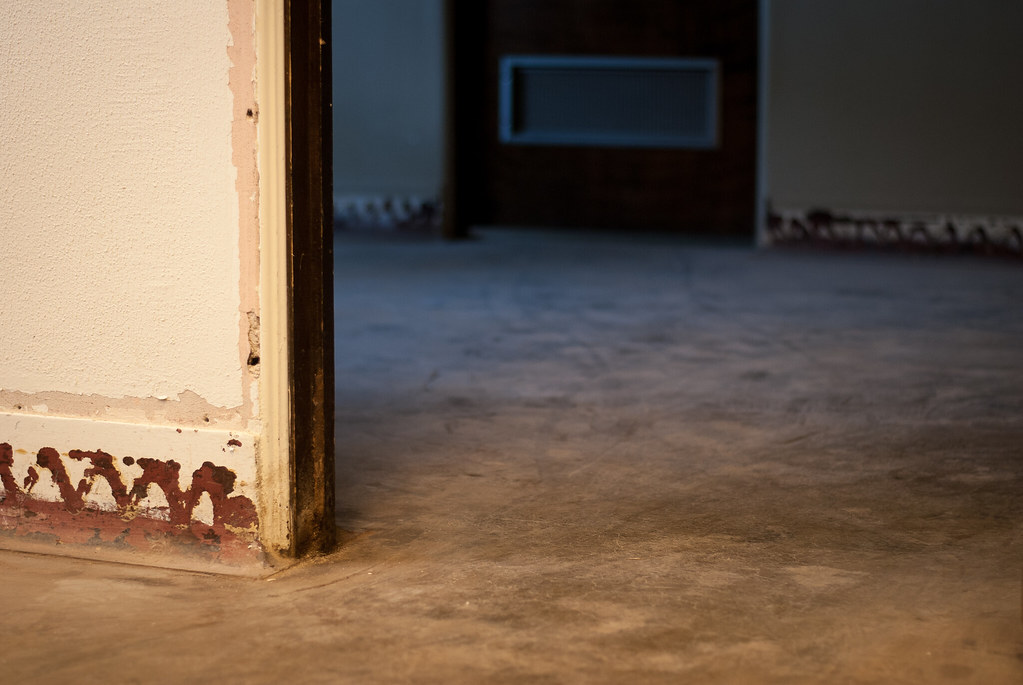 This photo is a bit more abstract in nature, and thus somewhat of a departure for me, but that’s kind of why I’m posting it as this week’s featured picture. Unlike most of the images I have here on the blog, the subject and context is not (I’m guessing, anyway) immediately clear to the viewer. Instead of a flower, a museum, or even a tornado siren I’ve got…a floor and a door. What, then, is going on here? The tagline of this blog is “Exploring the wonders of creation through a 50mm lens,” and that’s exactly what led to this picture.

I was walking through a building on campus recently when I came across an old room that was being renovated and thought it might make for an interesting picture. So, like I often do, I just kept on walking with that same thought ringing in my ears that has haunted me for years: “What if someone sees you?” I know the obvious answer, for experienced photographers unlike myself is, “So what?” but I still have trouble getting to that point mentally. I continued to walk down the hallway until I finally got the guts to turn around and go into the empty room to see what I could see. Turns out there wasn’t a whole lot going on, but enough elements did stand out that I thought might make for at least a semi-compelling photo.

The yellowed colors on the wall, the layers of paint around the edges, the dusty concrete floor, the dirty repainted moulding around the base, and the blue-ish light streaming in through an old window all came together to form an interesting take on what might otherwise be a quite uninteresting and rather nondescript room. The only trouble was capturing it with my 50mm lens, since its limited field of view (especially on a crop-sensor camera) makes it wholly impractical for interior shots like this. To get this shot I stood as far back in the corner of one room as I could, and even then there isn’t enough room to see the entire doorway in front of me. This limitation, however, presents some unique advantages as well: instead of seeing an entire room, the viewer is instead forced to notice singular details of the room that combine to form a more complete picture in his or her mind.

Or maybe I’m reading way too much into this, and at the end of the day it’s just a poorly-composed picture of a doorway. Either way I kind of like the picture and enjoyed the process of taking it, which in some ways is more important than the end result.