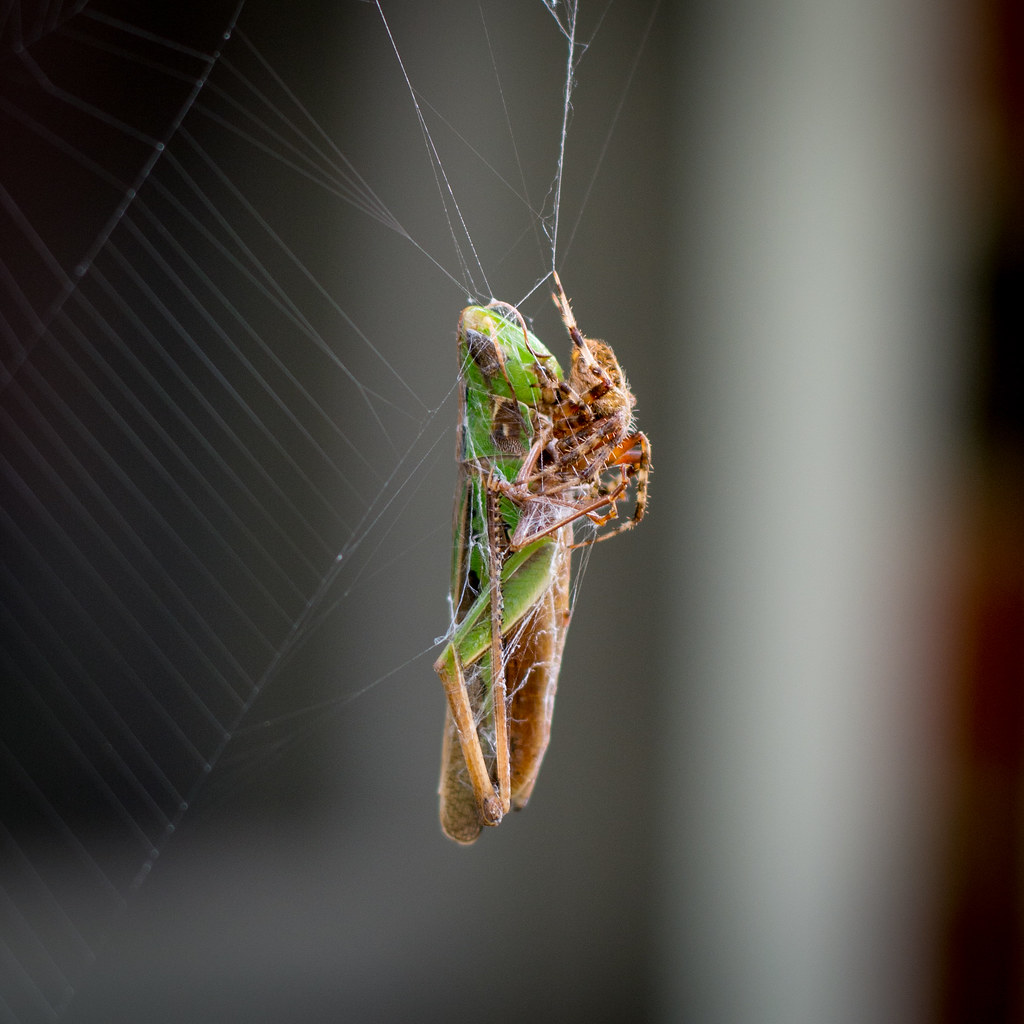 One of the fun parts about having kids is when you get to teach them about nature using real-life examples. Case in point: the photo you see here, which was created, you might say, when my buddy was over to hang out while his kids played with my kids on a recent Saturday morning. As everyone was playing outside we found a spiderweb stretched between the eaves and some bushes below on the western side of my house, which the kids found utterly fascinating. We have kind of a live-and-let-live policy when we’re outdoors, in that if we come across bugs and other creepy crawlies that might seem ugly or scary we generally let them be. It’s their turf, after all, but we have quite the opposite outlook whenever we find bugs or insects inside our house. Then, all bets are off :)

On this particular morning we thought it would make for an interesting science lesson if we could show the little ones just how a spider goes about having a morning snack. After some searching in the yard we came across a grasshopper a bout two inches long, which we brought over to the spider as somewhat of a peace offering: don’t come inside the house and we’ll make sure you start the day with a full tummy. For a while the spider seemed kind of intimidated at the green insect that we put in its web, and it spent a good 20 minutes huddled on the opposite side far away from the grasshopper. It was quite similar to a scene in my backyard a few years earlier in which we fed some grub worms to a garden spider, though in this case the prey was much larger than the predator.

A little while later one of the kids ran back to check on the situation, and wouldn’t you know it, the spider had wrapped the grasshopper in silk and was taking a break while waiting to further subdue his first catch of the day. It was a fascinating, if strangely grotesque, look into how nature operates and something the kids will probably remember for a while. Of course I had to document it with my camera, so a little while later I went out with my trusty 50mm lens (which, with a reproduction ratio of roughly 0.15, is hardly a macro stalwart) and took a few shots from several different angles. This one was shot at f/2.8, 1/180 second, ISO 200 and severely cropped in order to get a much better look at the subjects. As much as I talk about my D200, I knew I would need the extra resolution of my D7100 for cropping purposes so I used that instead and I sure am pleased with how everything turned out.

So was the spider :) The grasshopper, well…not so much.