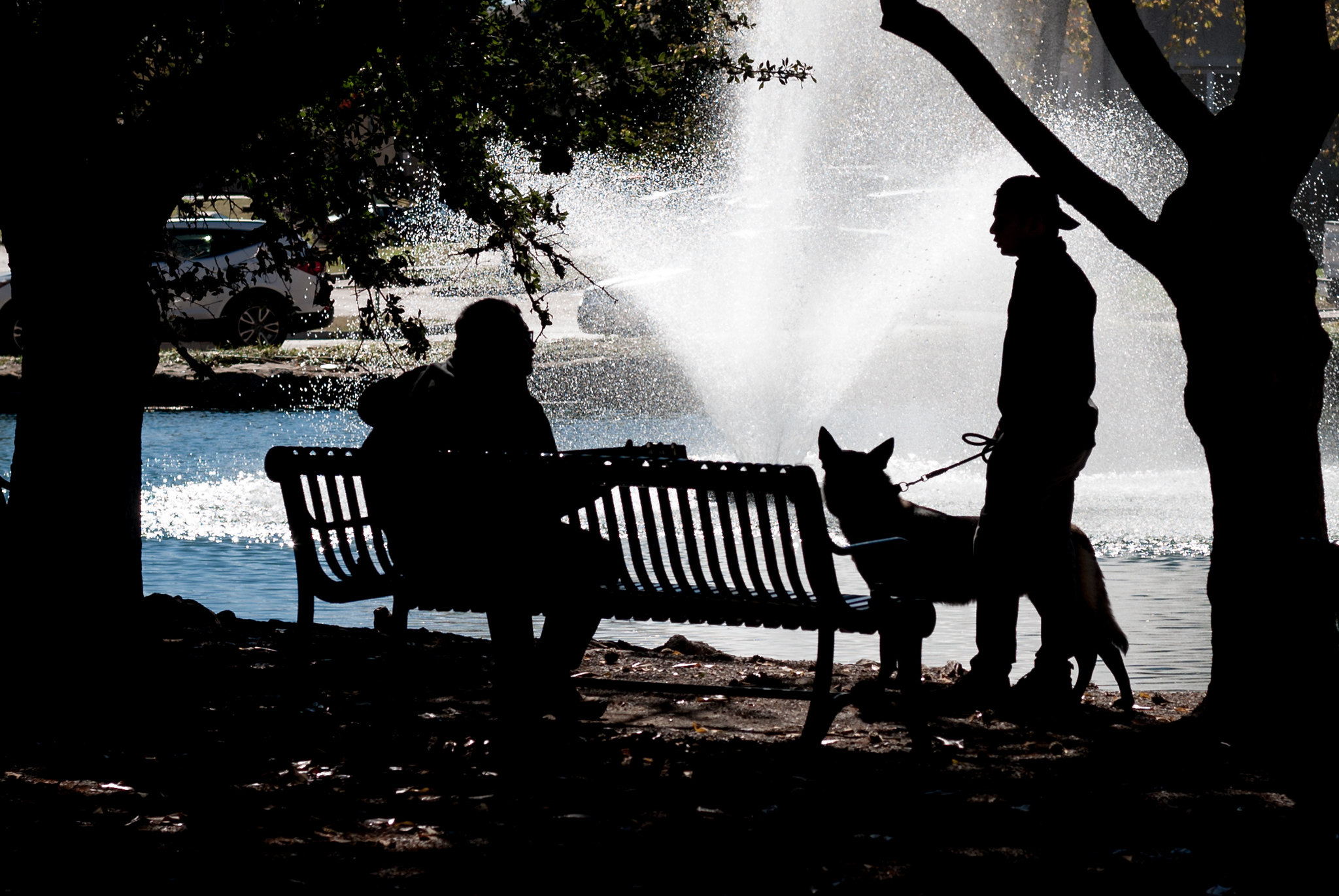 I debated whether to feature this image here on Weekly Fifty because it feels a bit repetitious. I have featured this location before, and indeed once posted an almost identical image a few months ago. But like Ahab’s white whale, this picture here represents something I have been trying to capture for quite some time: a silhouette with the Theta Pond fountains in the background. I have made some specific deliberate attempts by asking my friends to walk near the pond while I took their pictures and once caught this silhouette almost by accident while out shooting with my 85mm lens. But for some reason capturing a good silhouette with my 50mm lens (more on that in a bit) has proved almost impossible…until I got this one.

While it’s not perfect on a technical level (I could do without the cars in the background) I like what’s going on here: two people, one playing a guitar and the other walking his dog, having a conversation. It’s the sort of scene that’s not too uncommon on a college campus, and the fountain backdrop adds a bit of mystery to the whole situation. When I walked past the pond on this particular day I saw the guitarist by himself and the other guy walking his dog about a hundred yards away. Slowly the dog-walker made his way over to the guitarist, most likely because he heard him play a familiar tune and wanted to talk about it. Based on how they acted I don’t think the two guys were friends or really knew each other that well, and it was fun to see a moment of connection between two people if only for a brief moment.

This description makes it sound like I was some kind of stalker, which is one problem I have with candid street photography. I only watched the scene for a minute but even that felt like a long time to be surreptitiously taking pictures of people I did not know. I guess I could have gone up and introduced myself to make things less weird, but I don’t think these guys even noticed I was there in the first place and I imagine most of the strangeness is just a misperception in my own mind.

I’m quite happy with this picture even though it’s not exactly the type of silhouette I have been trying to get. At this point I’m not even sure I could explain precisely what it is I’m looking for, but I hope I know it when I see it.

Incidentally, the reason this type of image is hard to capture with a 50mm lens involves a couple of factors. The most important thing is that the subjects be properly backlit by the fountain, which can only happen if the fountain is large in the frame. That, in turn, can only happen if the subjects are physically close to the fountain (which is the case here) or if you use a telephoto lens to compress the background–essentially bring background objects closer while maintaining the same size for your subject. Since the Nifty Fifty is neither wide or telephoto, it means you need a situation like this for a good silhouette which is not always easy to come by. However, after getting this shot I’m encouraged and will probably continue trying to get that elusive white whale…