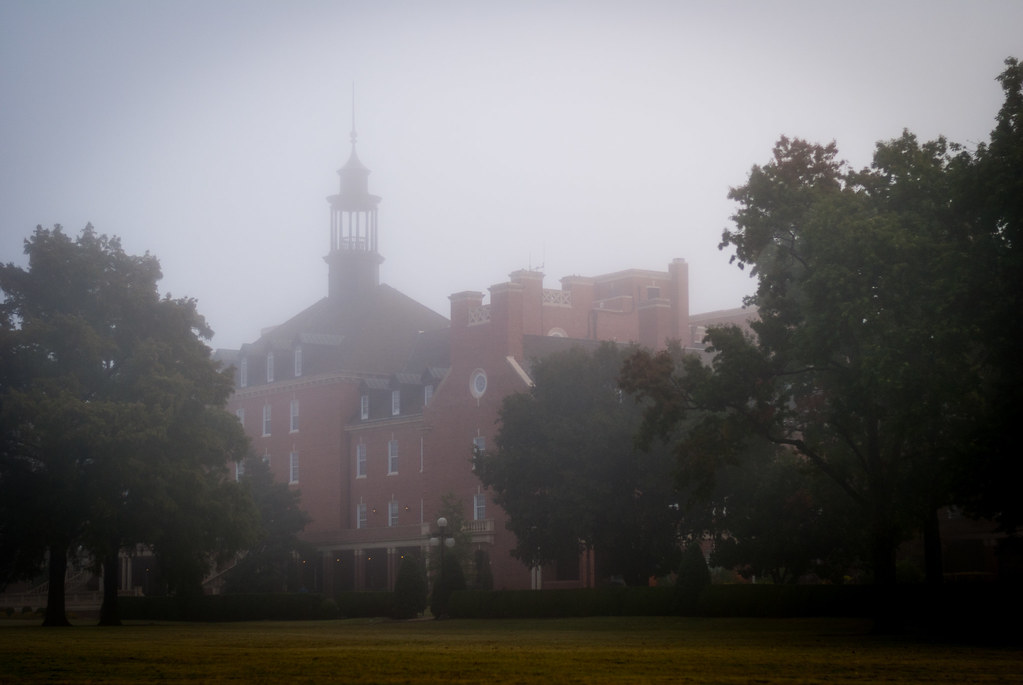 Foggy mornings are so cool for photography, and whenever we get one here in Oklahoma (which is only a handful of times each year) I like to go out and shoot some pics even if I don’t even have anything specific in mind. That was the case when I got this picture of the student union on the OSU campus: it was a busy morning at home, as often is the case with two little kiddos running around, but I made sure to bring the ol’ D200 + 50mm lens with me to work just in case the fog stuck around. Lo and behold it did, and after I parked my car I literally ran over to the main lawn on campus to see if I could capture some interesting pics of buildings, trees, or anything else shrouded in mist. The tricky thing about a 50mm lens on a crop sensor camera is the field of view if just so limited, which makes it difficult to capture the sheer size or scale of large things like this. (Something I mention not infrequently here in these posts. Sorry to repeat myself so often but man, times like this just illustrate once again how constraining it can be.)

To get this shot I had to stand waaaay back, which meant other elements like the trees on either side ended up in the shot too. At first I was a bit frustrated, and didn’t have a lot of time to mess around since I was on my way to work, so I thought I would turn this problem into an opportunity :) My solution was to use the surrounding elements to intentionally frame the student union in a way that added to the scale of what I was trying to convey. The structure itself with no foreground elements would probably have not been as interesting either, and in these conditions it ended up looking a bit like the Overlook Hotel from The Shining.

I shot this wide open because I couldn’t be sure my aperture blades would close properly (I think I mentioned this in a recent post as well) but even so I’m quite happy with the overall composition. Everything was so far back that depth of field was not an issue, and the drop in sharpness that can happen when shooting wide open was not a problem because the whole scene was so foggy and dreamlike that a bit of softening actually added to the mood.

After I shot this I went on my way to work but also snapped this with my iPhone:

Super foggy morning on campus today. It feels like we are in the first chapter of a Stephen King novel. #okstate #stillwater #nofilter #fog #whatdotheygotintherekingkong

The contrast here is kind of jarring, and in retrospect I kind of like how the 50mm shot is a bit more closed in. It makes everything seem more personal, as if the viewer is actually approaching the student union instead of just observing the scene from afar. I don’t think either shot is necessarily better, but if I had to pick one I think I’d still go with the first :)