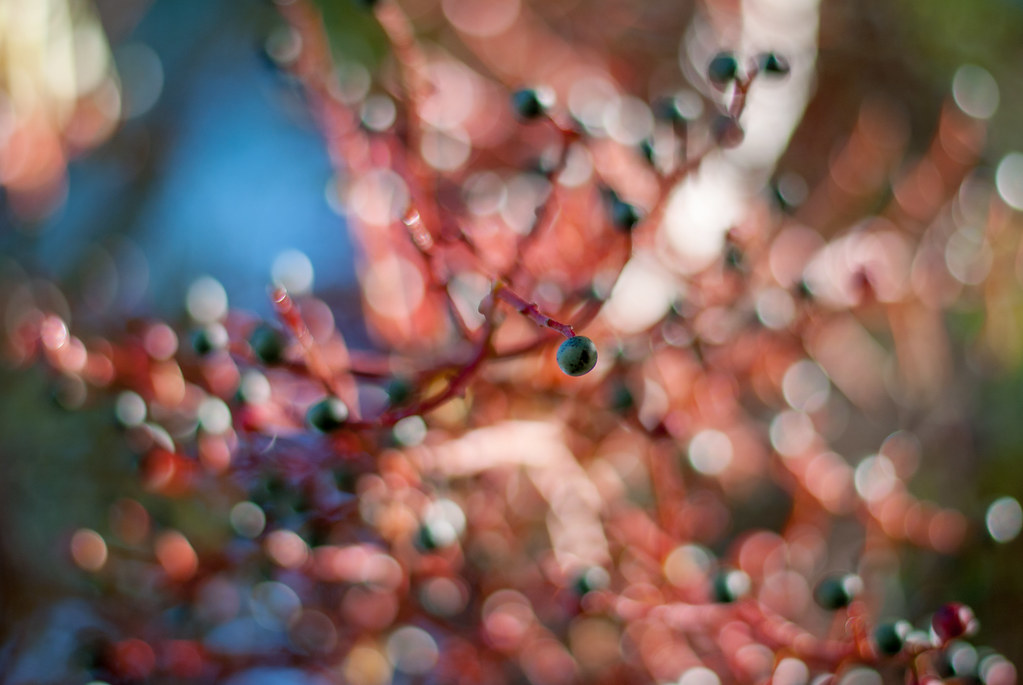 This picture is a bit of a departure for me since I don’t normally post images like this. It’s kind of a bokeh explosion with almost no clear focal point except for the one seed in the center (another thing I don’t do very often, incidentally) but I’m posting it here for a couple of reasons. You might have remembered a few posts in which I cautioned against shooting prime lenses wide open unless you really needed that crazy depth of field or light-gathering ability. Most lenses aren’t the sharpest when wide open, and the depth of field is often so shallow it’s downright unmanageable. Unfortunately, my trusty little (or giant, when you put it next to almost any modern camera) D200 is not the performer it once was and has this nasty habit of not stopping down the lens aperture on about one in five pictures. This means on any given photo session where I’m shooting with an aperture smaller than f/1.8 I’ll have several photos that are fine and then one that is completely washed out because the lens blades did not close properly.

To combat this problem I’ve started thinking of my lens as not just limited in focal length, but limited in aperture as well. By shooting at only f/1.8 I have had to consider things that would not normally be an issue, since I could just control depth of field or incoming light by stopping down my aperture a bit. It’s kind of ironic since I normally preach against using the widest possible aperture and yet, in some ways it’s what I’m stuck with.

This photo, then, is a result of such conditions. It’s a sprig of seeds on a Chinese Pistache tree caught in the afternoon sunlight, and what you see here is almost exactly what I set out to capture: one single seed in focus with the rest of the image a red and white tapestry of beautiful bokeh. In some ways I wish I could have made the foremost seed a little more accentuated since it’s kind of difficult to notice at first glance, but when dealing with non-macro lenses results like this are about as good as one can reasonably expect.

This is one of about 25 images I shot while moving the focusing ring on my lens back and forth and I quite like it partly because it’s kind of a unique composition for me but also because this is the first post of December and the colors evoke a sense of the coming Christmas season. A bit of foreshadowing, if you will. So while this might be a bit premature, let me close this post in turn with a bit of foreshadowing about Christ himself from the book of Deuteronomy:

The Lord thy God will raise up unto thee a Prophet from the midst of thee, of thy brethren, like unto me; unto him ye shall hearken; (18:15)