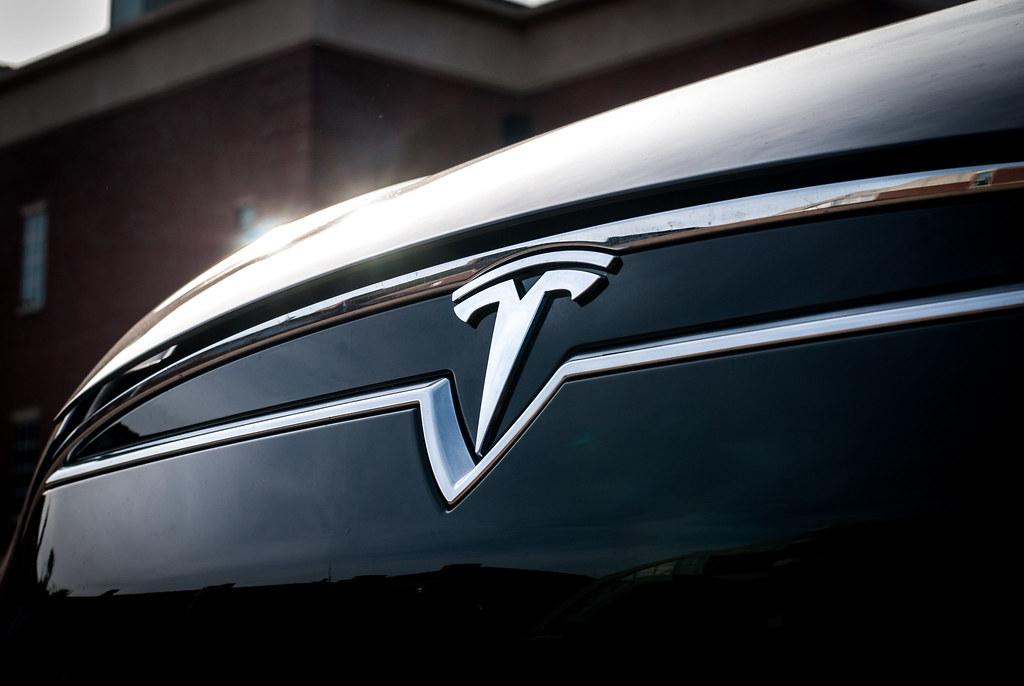 Talk about serendipity. Nothing about this picture was planned at all, and yet I’m pretty happy with how it turned out. It came about when a coworker and I went on a short walk to the campus post office a few weeks ago, and as we were heading back to the office we spotted this rather unique car in the parking lot. It’s a Tesla Model S, and though I had read about them and seen videos online I never got to see one in person. And as luck would have it, I had my D200 + 50mm combination with me (yet another reason to always have your camera handy!) so we paused for a few minutes to gawk at the car and take a few pictures.

This is kind of an updated version of a picture I posted in March 2015, though that certainly was not my intention when I took it. Mostly I just wanted to capture that slick Tesla logo along with a bit of sun flare, and it was only later that I realized I had kind of taken the same image as the Volkswagen several months ago. In comparing the two side by side there is a clear improvement on this Tesla shot, though I have a long, long way to go in terms of photographing these sorts of things. For instance, the image you see here involved about 10 minutes of retouching in Lightroom whereas a professional would have spent an entire day or more on this one picture in Photoshop doing all sorts of cleanup and editing work. I’m not that good, nor do I suspect I ever will be, and also don’t have that kind of time to devote to creating magazine-worthy images of cars. (Though my buddy Ben could do it in a heartbeat. He’s a graphic design genius and does this sort of thing for a living.)

A bit about the photo: I shot it at f/9.5 so I could reign in the depth of field just a bit while also hopefully getting a bit of sun flare that would likely get all blown out with a larger aperture. I used ISO 100 to get as clean of a shot as possible, shot in Aperture Priority, and ended up with a 1/160 shutter. I shot from a low angle to accentuate the sleekness of the vehicle and hopefully convey a sense of power and dominance, which would be kind of lost if it were shot from eye level.

Not long after I took this picture a professor I knew walked past and we got to chatting about the Tesla. Turns out his office mate, who I also know, owns the car and after a brief email exchange a few days later he offered me a ride and it was one of the most astounding experiences I have ever had. The closest comparison I have for accelerating in a Tesla is to that of cresting the top hill of a roller coaster. At one point we went from zero to ninety in a matter of seconds, all in a vehicle that was whisper quiet. It felt like something out of Star Trek, and gave me something to start saving my pennies for :)