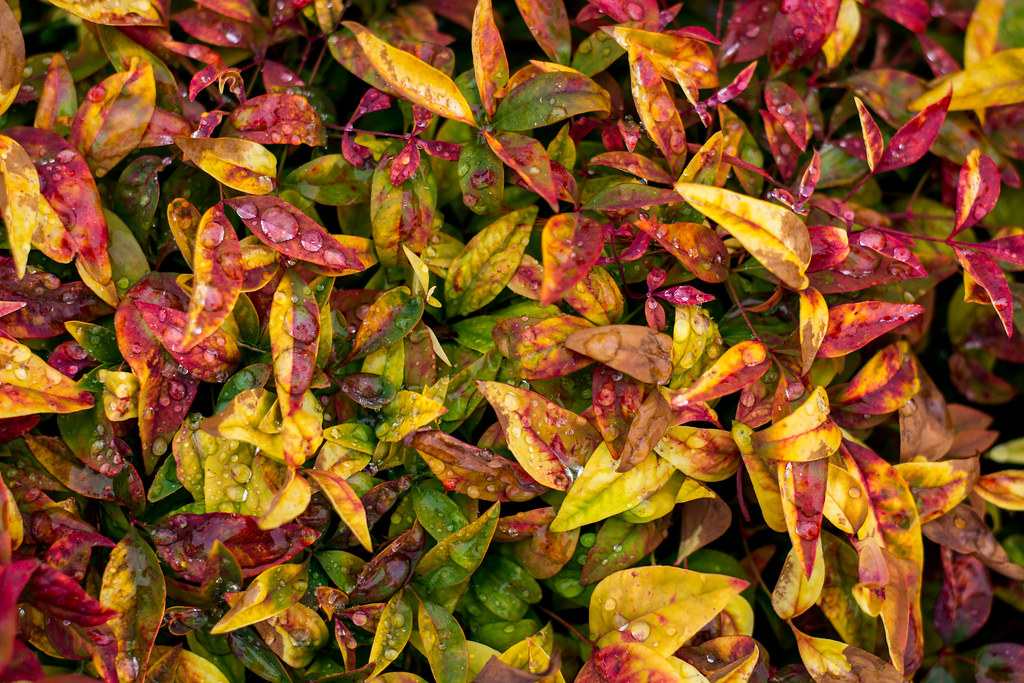 Do yourself a favor here: click on the picture to see it in the Flickr gallery, and then click the option to see it full-size. I’m not trying to be conceited or anything, but when I posted the image here on the blog it seemed like some of the sharpness and richness of color somehow got lost with the small size.

It was kind of a dreary day when I shot this image, and my coworker and I went out for a very short walk to just get out of the office for a few minutes. As I often do I had my camera with me (which is increasingly becoming my D7100 while my D200 sadly gathers dust on the shelf) just in case we came across a picture opportunity, and while I had no intention of taking pictures of these small bushes I did notice two things as we passed by that made me think twice: the mix of rich colors along with the bits of rain that had pooled among their leaves. First I took a couple shots from a low angle looking out over the bushes while trying to keep one large drop of water in focus, but they didn’t turn out all that great and looked rather derivative of some similar pictures I have taken in the past. Since I don’t look at the LCD screen on my camera that often I didn’t know how these initial images turned out, but as we kept walking I saw another cluster of colored leaves that was just begging to be photographed.

For the shot above I stood directly above this patch of leaves, set my aperture for f/2.8, and popped off a couple shots at 1/180 second with an ISO of 125. Even though the day was rather overcast there was plenty of light for shooting with a fast shutter and low ISO which turned out to be a huge benefit once I loaded this picture up in Lightroom. The original picture looks bland, boring, and altogether forgettable but thanks to the magic of shooting in RAW I was able to take the picture to (cliché warning) a whole new level.

This image is OK, but it’s lacking the texture and crispness of the edited file, and I also like how in the final version there is something in the way of a clear focal point as well. The larger drops in the top-left quadrant serve to anchor the picture and draw your attention, but in the original file there isn’t a good sense of what you are supposed to look at. I know some people who shoot in RAW but don’t do anything to the files in post, and while I’m not one to tell anyone how he or she should approach his or her own photography, I will say that if you are not doing anything to your RAW files you might as well shoot in JPG and let your camera take care of interpreting the data how it wants to. Neither one is necessarily good or bad and both have tradeoffs, but it might be worth your time to play around with your RAW files a bit in Lightroom or Photoshop to get a little more out of them than you might initially realize.

Anyway, sorry for the somewhat technical tangent there. I hope you like the picture and if nothing else, I hope you find time in the coming few days to get your camera out and go take some pictures with it :)