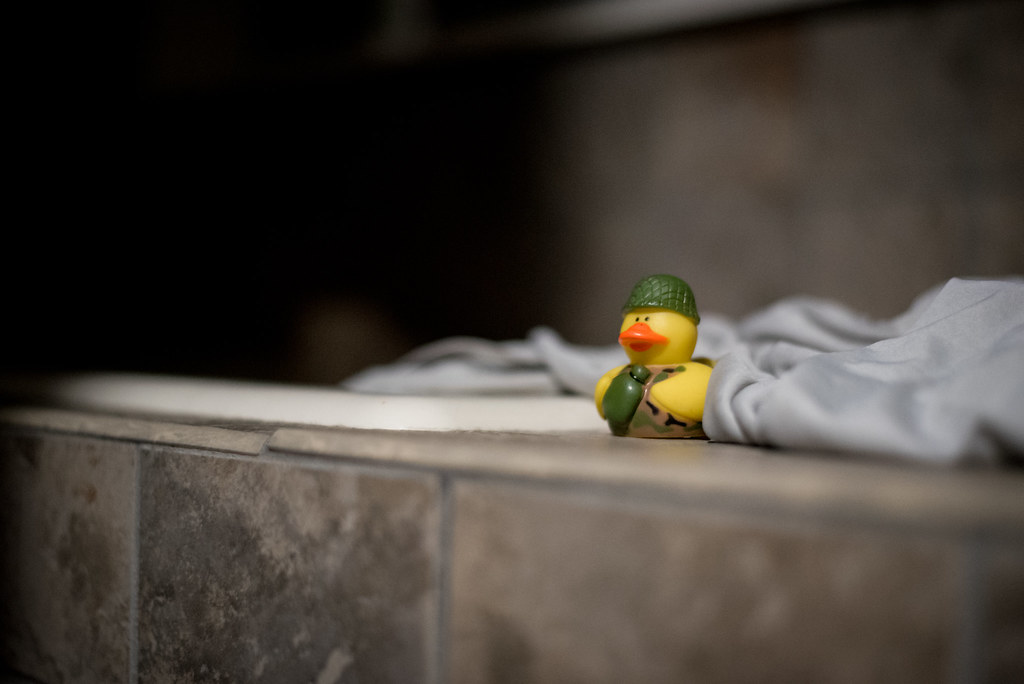 (No, not that kind of sentinel.)

I’m not sure why I even thought to take this photo in the first place, and I’m not really sure what to think of it overall, but I do kind of like it. I was literally just brushing my teeth one chilly morning a few weeks ago when I happened to notice my son’s rubber ducky sitting on the edge of the bathtub. The sun was not yet up and the light you’re seeing is coming from the closet behind me, and I thought everything came together to form a kind of cool scene. I imagined this little yellow plastic waterfowl standing on the edge of a precipice keeping watch so as to alert the rest of his unit of any incoming enemy forces. Despite what was clearly a long, dark, and cold night this fella stood at his post and remained vigilant through the small hours of the night and would remain until the sun rose high in the morning sky. No ill would befall his friends tonight. Not on his watch.

I shot this with my D750 because the light was so dim that I knew I would need a higher ISO, and a relatively clean one at that. Also, I just like using any opportunity to take pictures that camera :) I don’t know if there is enough context to give you a sense that this duck is sitting on the edge of a bathtub, and I hope you don’t mind a picture with my pajamas all wrinkled up in the foreground, but if nothing else this photo brings a bit of a smile to my face. It’s probably a bit conceited to say this is a good picture but I do think it works to illustrate how you can find compelling photo opportunities in everyday life even when things seem kind of dull and boring. Of course it never hurts to get some interesting lighting conditions such as the wee hours of the morning, late at night, or on a cloudy day. In fact, I would recommend this as a possible course of action if you are ever struggling to find ways of jumpstarting your own photography: get up a bit earlier or stay up a bit later and pay attention to how ordinary everyday objects give off a whole new impression with the different lighting conditions.

There’s also one final note about the picture I thought might be worth mentioning. I shot this at f/1.8, (ISO 6400, 1/90 second) which meant the depth of field was razor thin especially since I was using a full frame camera so close to my subject. I think that’s why the duck’s head is just a bit out of focus, and the next time I take a shot like this I’ll make sure to double check that everything is sharp before shutting things down and going on with my day. I’m kind of curious to return to this scene tomorrow and see if my kids have played with this duck, and imagine what other things he might have been doing in the meantime…