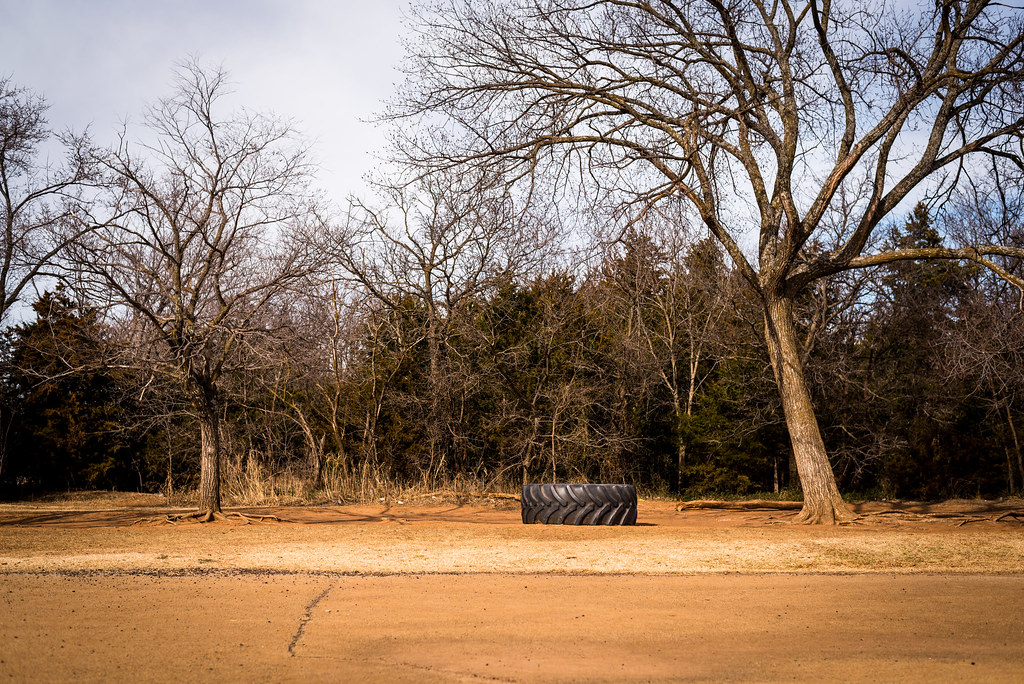 This week’s picture isn’t so much about the photo itself, but about the power of photography as a medium of expression and how it presents a specific view of reality. When you see this image, I have two questions for you:

For me the picture seems like something you might find in a brochure about impoverished countries in need of aid, or perhaps it would go along with a story about rural farmers struggling to make with a rapidly changing climate. Maybe this tire is a relic from a long-abandoned farm, or maybe the trees and dusty ground are about to be paved in favor of an urban revitalization project. What about the people, though? Who put the tire there, and why? Why is it sitting abandoned between two trees?

The real story here is, I’m afraid, actually quite simple and mundane. This photo was taken behind my son’s elementary school when he and I went on a bike ride on a warm afternoon in February. In the foreground is a cracked cement basketball court and in the background you can see a line of trees that mark the border of the school’s outdoor classroom. If I turned just a bit to the left you would see a large suburban water tower, and a bit to the right is a set of fairly modern playground equipment. This tire, according to my son, is just another playground fixture that the kids like sitting on and I’m guessing it was donated by a local farmer who no longer needed it. While the image in and of itself might conjure up all sorts of ideas and stories, the truth is much less interesting.

I took this image specifically to illustrate the ability photographers have to shape perceptions of the world around us. It would have been interesting to put a kid in the shot and see if that affected the viewers’ interpretation of the scene as well, but as it stands I view this as a case study in how the pictures we take, the decisions we make when editing them, the angle from which we shoot, the lens we use…all these are creative and hopefully quite intentional tools and techniques that can be used to tell a story. I do think photographers have a responsibility to accurately represent the world around them, but that doesn’t mean there is no room for creative expression either. We walk a fine line sometimes, and as long as we are truthful and not intentionally deceiving people then I’m happy to dip my toes a bit to one side every now and then just to see what happens.