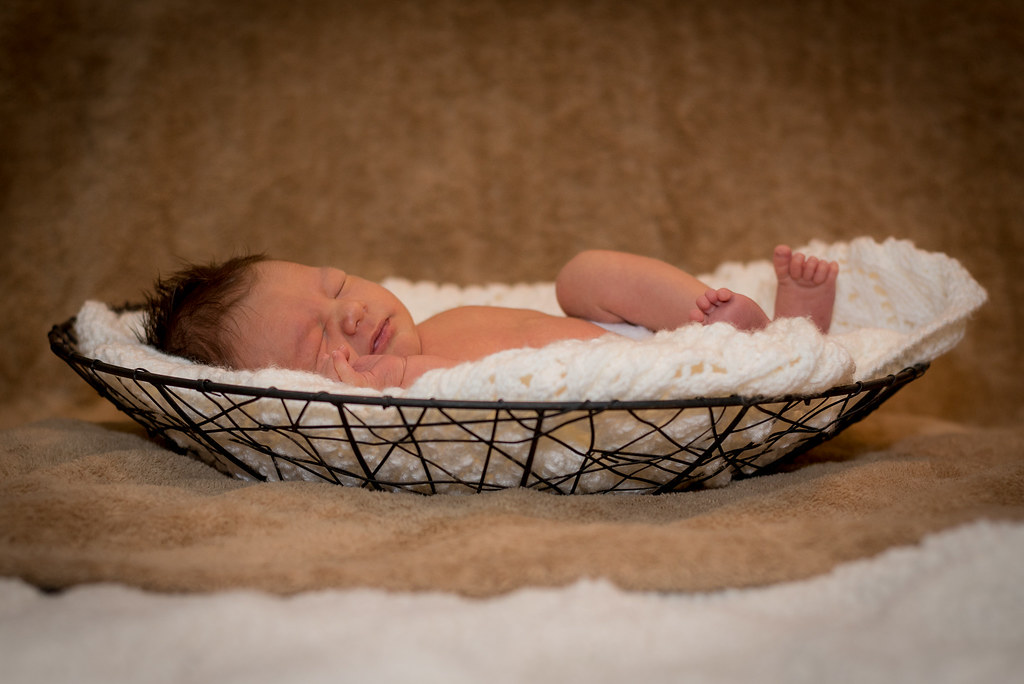 First things first: this is not my kid :) He is, however, the son of a friend of mine who was kind enough to let me come into her home and take a few pictures when he was only two weeks old. This type of photography has long intrigued me and I was so glad she was willing to let me come over and spend an hour taking pictures of her son and her five-year-old daughter. Several aspects of this photo session were somewhat unique, and even though things got a bit tricky at times I was overall quite pleased with how everything went. This post, then, is sort of a breakdown of the entire session along with a few lessons I learned along the way. Hope you like photo talk, because here we go…

When my friend had her baby, my wife and I immediately started planning for this photo session. (Actually, we had been thinking about it for a while but things really ramped up when we knew the pictures were imminent.) We looked online for examples of infant photography, investigated any equipment we might need to buy, watched videos from experienced photographers who take photos of babies, and even tried a few test shots in our living room using stuffed animals as placeholders. We went to Hobby Lobby and looked at several baskets and ended up choosing the one you see here, and sorted through all our blankets and fabrics to find a couple that would work for padding as well as aesthetics. I went to the session with the following gear:

Nikon D750 which I used for every photo because it’s awesome :)

35mm f/1.8 lens, which is a DX lens that works surprisingly well on my FX D750, albeit with some vignetting. I only used this on a couple shots and kept it at f/4 to reign in the dark corners.

Nikon SB700 speedlight which I used on almost every photo

5-in-one reflector that I didn’t use at all

Step ladder so I could take some photos from above

Blankets and lots of them. Some for backgrounds, some just to keep the baby comfy

Space heater to keep the baby warm. This was so useful it’s not even funny, and I’ll never do another infant session without it :)

The session took about an hour, not including some time to set things up and then tear them down at the end, and I think that was probably about the right amount of time to spend. I didn’t want to wear out the baby or his big sister, and the family had other things to do than spend hours upon hours taking directions from a photographer. I had taken hundreds, perhaps thousands, of photos of my own sons when they were infants but had never done a shoot quite like this for someone else so while some of this gear might have been a bit gratuitous I also wanted to make sure I was prepared for anything.

I started off with my D750 and 50mm lens which worked quite well, and since we were shooting indoors in the evening I had to use my flash to make sure everything was evenly lit. I almost bought a portable lighting kit for the shoot but I had to find a way of striking a balance between getting pictures and having a practical setup, and a big old softbox or some umbrellas for off-camera strobes just seemed like overkill especially since I was a guest in someone else’s house. One of my favorite tricks when using a speedlight is to bounce it off other surfaces to magnify the impact of the light, and for the picture you see at the top of this post I had the flash pointed straight up which essentially turned the ceiling of the room into one giant light bulb. It worked remarkably well for this as well as almost every other picture from the evening, and if you are interested in learning more about photography but don’t yet have a dedicated external flash I would recommend picking one up.

A few times during the evening I switched to the 85mm lens but found that it was a bit overkill and the depth of field was a little too shallow to properly manage without stopping my aperture way down. I wasn’t interested in compressing the background as much as I wanted clear shots of the baby, so mostly I just stuck with my old pal, the classic Nifty Fifty lens. I know it might sound a bit cheesy but the entire session really was a great deal of fun and I thoroughly enjoyed getting the chance to practice my baby photography skills, as this is an area that my wife and I would like to explore more for our side project Stevens Creek Photography.

To my friend…if you’re reading this, thank you for having me over and I can hardly believe how much your cute little guy has grown already. I hope you like the pictures as much as I liked taking them!