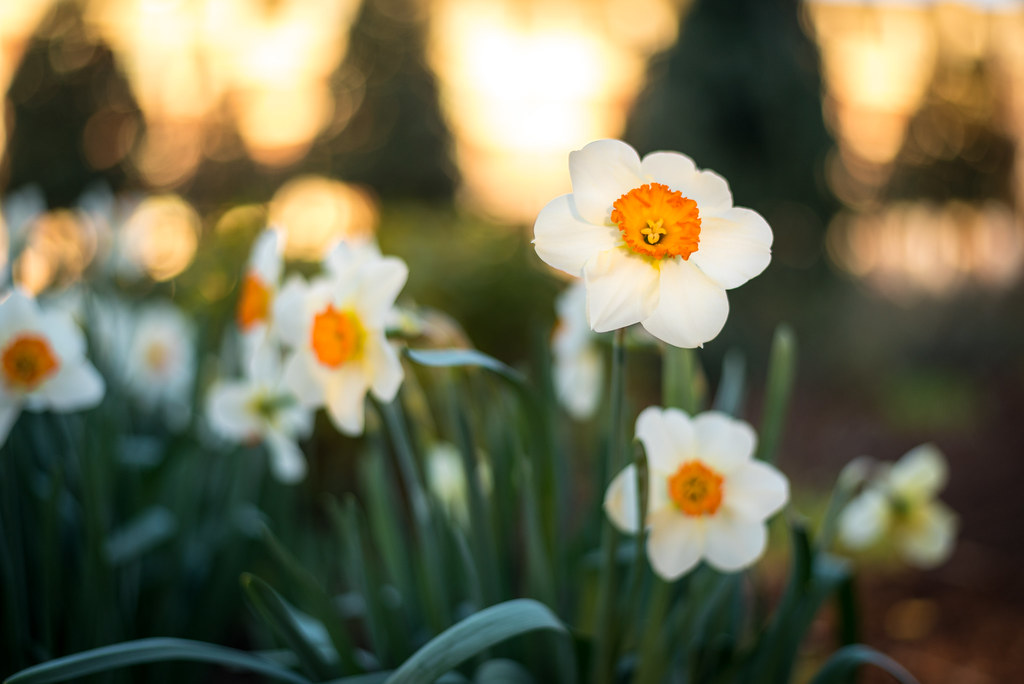 To me this photo is an illustration of how important lighting and time of day can be when it comes to getting the shot you want. I took this picture as I was walking past Theta Pond on campus before work one morning specifically because I wanted to basically get a do-over for a picture I took the previous day. At that time my coworker and I took a short break to go for a walk around the pond and then back to our office, and on the way I saw this patch of flowers so I stopped for a picture. What I got was decent but rather uninspiring:

The main problem here is the light: the overhead sun creates all sorts of harsh shadows that create a stilted and uninviting scene. The flower in front looks like it is tilted downwards as if shying away from the light, and the picture feels a bit cold and distant despite showing a rather colorful garden of white and yellow flowers. Admittedly the colors are all a bit brighter and have a greater sense of contrast, but I think that leads to a less pleasing image overall. My solution was to revisit the same location right when the sun was coming up to get a better picture and I think I mostly got what I was looking for.

Ever since I watched Sam Abell’s lecture on The Life of a Photograph I have been trying much harder to microcompose my pictures. This involves getting the overall composition set up properly but then adjusting your point of view so very small things are also aligned how they should be. Case in point: the flower in the top photograph struggling to reach up to the sky while the rest of the flowers are still tilted downwards. A properly composed picture would have the entire flower, petals and all, situated in the dark area between the two bright spots in the background. My picture suffers a bit due to this oversight in microcomposition and is left with a bit less of an impact overall. Imagine if the entire bright flower were set against the dark background and how much more it would stand out as a result, but alas, the photo remains a solid B instead of an A. Like so many things here on this blog it was a learning experience and I fully intend to do better next time, or the time after that, or the time after that…and that’s how the game of photography goes :)