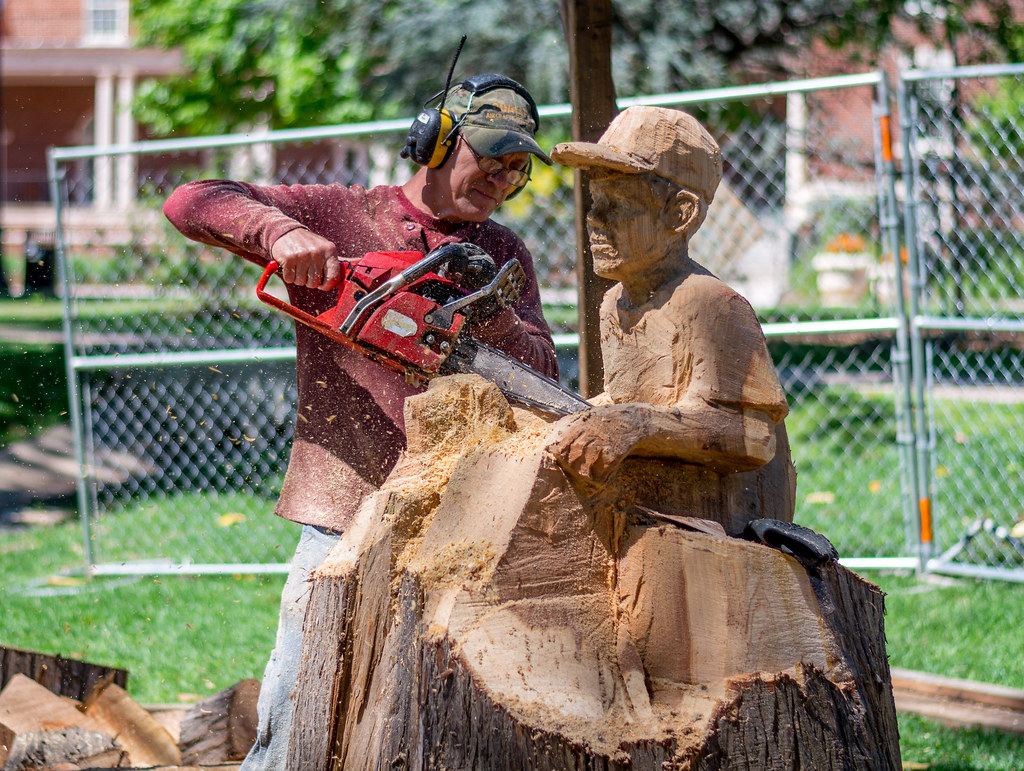 This picture is another example of not only being in the right place at the right time, but having my camera with me to document the occasion. My coworker and I were walking to get some sandwiches for lunch when we came across this scene of a man carving a figure out of a tree stump, so of course we stopped to get a closer look and take a few snapshots…except I didn’t have my camera. Cue sad trombone. Thankfully he was still carving away when I returned a short while later with my D7100 + 50mm lens, and I spent a few minutes taking pictures from three different angles: what you see here, then on the opposite side, and a few more through the fence. It was clear that bystanders were not supposed to get too close so it was actually kind of a good thing I was shooting with a crop sensor camera since it gave me a little bit more reach with my lens, effectively turning it into a 75mm which helped bring me a bit closer to the action.*

I wasn’t quite sure what exactly I was going for as I shot the pictures but I knew I wanted it to be dynamic. Even though the tree stump was a fixed element and the man himself wasn’t really moving around too much, the chainsaw carving away gave the scene an incredible sense of life and vibrance–something I was hoping to capture with my camera even though I wasn’t quite sure how. I got about 25 images and looking through them it finally clicked: wood chips. That was the secret sauce that added the sense of life and action to the image which I wasn’t even thinking about at the time I took the photos. I mean, I was fairly pleased with how some of the other shots turned out but most of them didn’t explicitly show tree shavings flying around and you couldn’t really see the bar of the chainsaw either, and both elements were clearly present in this picture which I really liked.

I shot this at f/1.8 even though I knew it wouldn’t be the sharpest picture in the world, but given that I was standing several feet away I knew anything smaller than f/1.8 would give me a depth of field that was simply too wide and I was really hoping to get some separation between my subjects and the background. At one point I even tried shooting through the leaves of a small tree to get a bit of foreground in the mix as well, but it ended up just being distracting and kind of gratuitous. Despite the fact that almost none of this was planned out beforehand I am quite happy with how the shot turned out, and it’s cool to have something like this wood carving here on campus. You can’t see it in this picture but the boy and his dog (the thing the carver is working on in the photo) are facing a pond and it really does create a calming pleasant scene when you see it in person.

A few hours later as I was leaving campus to head home I caught up with the carver as he was walking across the lawn and we had a brief but incredibly heartwarming chat. His name is Clayton Coss and for nearly the past three decades he has been giving new life to dead trees by turning them into beautiful works of art. You can watch his story in this video, and I hope you enjoy it as much as I did.

The next morning I saw the finished tree carving, and it really was a sight to see. Mr. Coss, if you ever read this…thank you for such a marvelous addition to our campus here at OSU.

*There’s much more to the crop vs. full-frame issue than this, and shooting a 50mm on crop does not magically make it a 75mm lens in terms of composition, background compression, etc. but it does give you a similar field of view as a 75mm lens which is all I meant here.