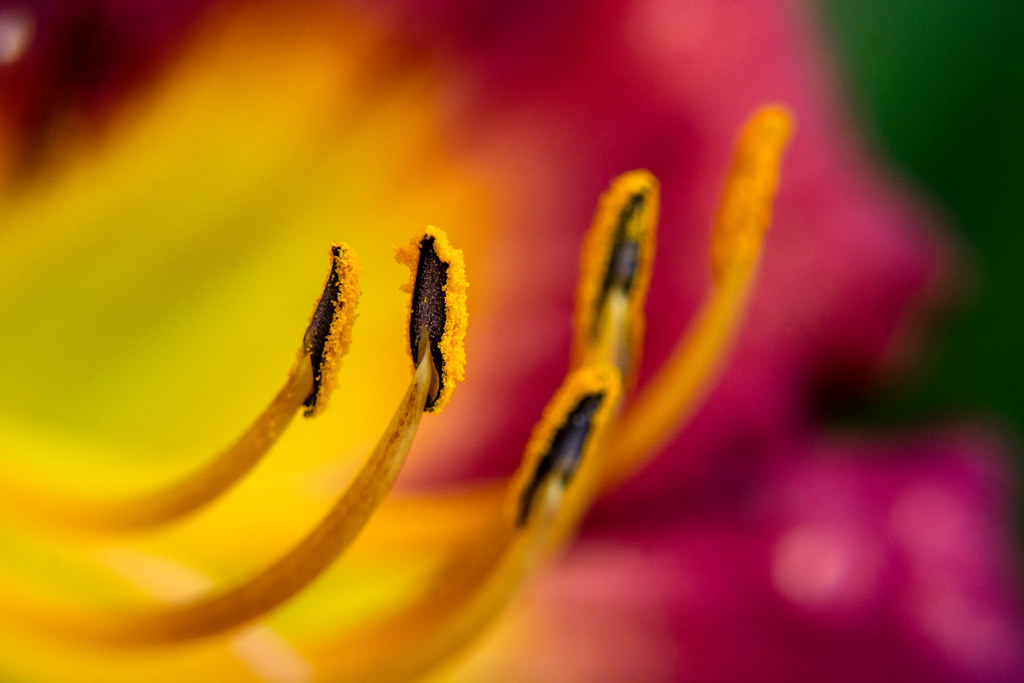 Alright, here you have it. This photo right here…this is the reason I bought a set of close-up filters. Every time I have seen a shot like this over the past several years I have wanted to get one of my own, but never had the proper equipment to make it happen. Certainly any one of my cameras could get this shot, even my old D200, but there’s no way to get a picture like this without using some type of macro equipment. The subject is just too small, and taking a picture with a normal lens and cropping it in post does not at all yield the same results as simply getting very close to the subject. However after getting my close-up filters and trying a few experiments I knew a shot like this was possible, which then meant I had to find a way to make it actually happen.

What you are seeing here are the anthers at the end of the filaments on a flower. (It’s some kind of lily, I think, though I’m not certain.) I found this, as I do so many of my Weekly Fifty pictures, on the campus of Oklahoma State University as I was out running an errand one day in late May. I figured we must have had some flowers on campus that would allow for this type of image but for a few weeks I had been mostly unsuccessful in locating any, until I cam across this one near the south side of our student union. There was a bit of a breeze so it made focusing a little tricky, and I ended up mostly just moving myself forward and backward as I snapped the shutter in order to get the picture I was hoping for. Even at f/8 I knew the depth of field would be so shallow as to be almost uncontrollable, and autofocus wasn’t helping much because of the way close-up filters degrade its accuracy along with the light wind causing its own set of problems.

I kept at it though, and after shooting the flower from one side I scooted over and tried a different angle while finally resulted in the image you see here. I hope I’m not being conceited when I say how pleased I am with the picture and the way it turned out–it’s not often that an image comes across exactly how I picture it in my mind, but that’s precisely what happened in this particular instance. I like the clear, distinct color palette and the sharpness of the foremost anther, and I like how you can clearly see a context for the subject too. Going much wider on the aperture would have resulted in a depth of field that would have likely obscured too many background elements and made it well-nigh impossible to get the one single anther in focus anyway.

I’m excited to keep using these filters and maybe one day get my hands on a true macro lens to play with too. It sure would be fun :)