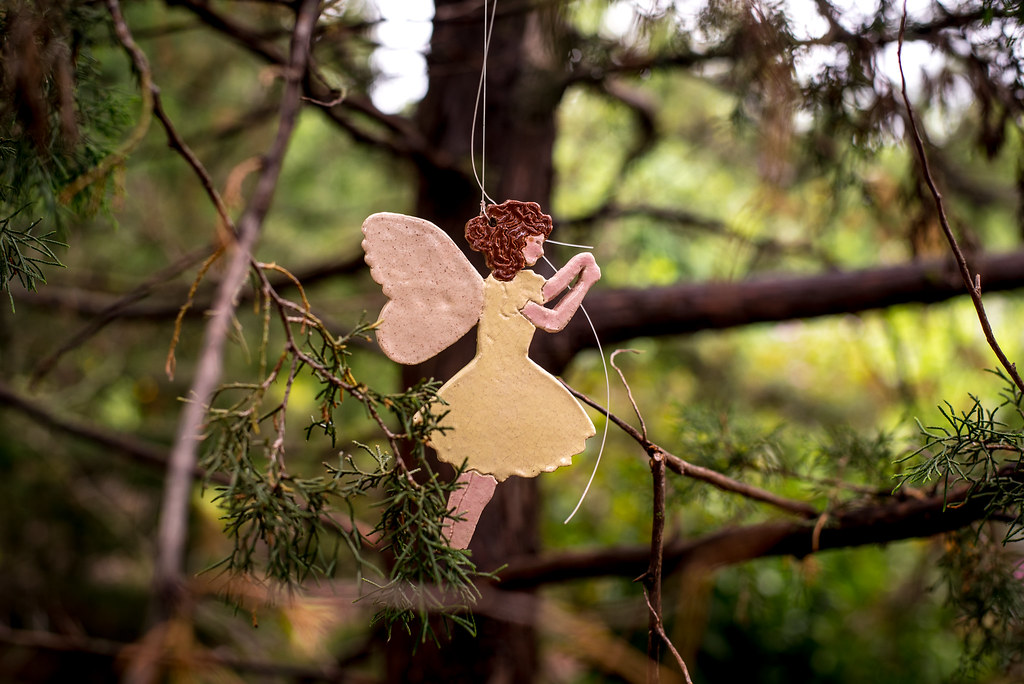 This photo honestly took me by surprise just a little bit. On a warm Sunday afternoon in July my wife and I were at the local botanic gardens with our two boys and as they played with one of the exhibits (some kind of hand-operated water pump connected to a trough and an underground storage tank) and we wandered around talking while looking at the local flora. It was one of those lazy, relaxing kind of days where there is no real agenda other than to get out and enjoy nature and we wanted to take advantage before it got too sunny. Soon our boys migrated to a spot within a grove of trees containing a few interactive art pieces to play with, so we went with and played along while snapping a couple pictures just for the fun of it.

As we were getting ready to head back to the car I spotted this tiny winged woodland lady frolicking among the branches, and crept in close to get a better look. She was kind enough to hover silently while I drew near with my D750 + 50mm lens, and turned a few pirouettes while I snapped some pictures. I didn’t want to disturb her lest she cry out for Oberon or Puck to come to her rescue but I did linger long enough get about a dozen photos before retreating to the outside world. Her slow twirling made it somewhat difficult to get the images I was looking for, and what I ended up with is actually not at all what I intended at the outset. I thought it would be fun to get a picture of her on the left side of the frame while also angled slightly so as to possibly show a bit of movement, and while I did in fact get that picture I did not really like it much:

Looking at the photos in Lightroom I realized that her slightly skewed composure made her look strangely distorted, and the extrusion of this two-dimensional shape in order to add depth only served to make such a picture look strange and even a bit disconcerting. I had about a dozen images just like this one but fortunately I also managed to capture one–and only one–of this little lady directly from the side which is what I ended up using as this week’s featured photo. I shot it at f/4 which, thanks to my full-frame camera, gave me the equivalent depth of field as if I had shot this at f/2.8 on a crop sensor camera and resulted in a very pleasing composition overall.

I thought it was cool to see this little scene in the gardens on that day, and it made me think of how we often decorate Christmas trees with similar trinkets and tchotchkes but put them away once the season passes. Why do we do that? Why not add a bit of life and inspire a sense of wonder in the world around us by adding special charms like this to our yards during the rest of the year? It seems like a fun activity to do, and I think I’m going to try to get on this with my own kiddos and find ways of adding a little extra spark of life to the natural world outside our house and the world around us.