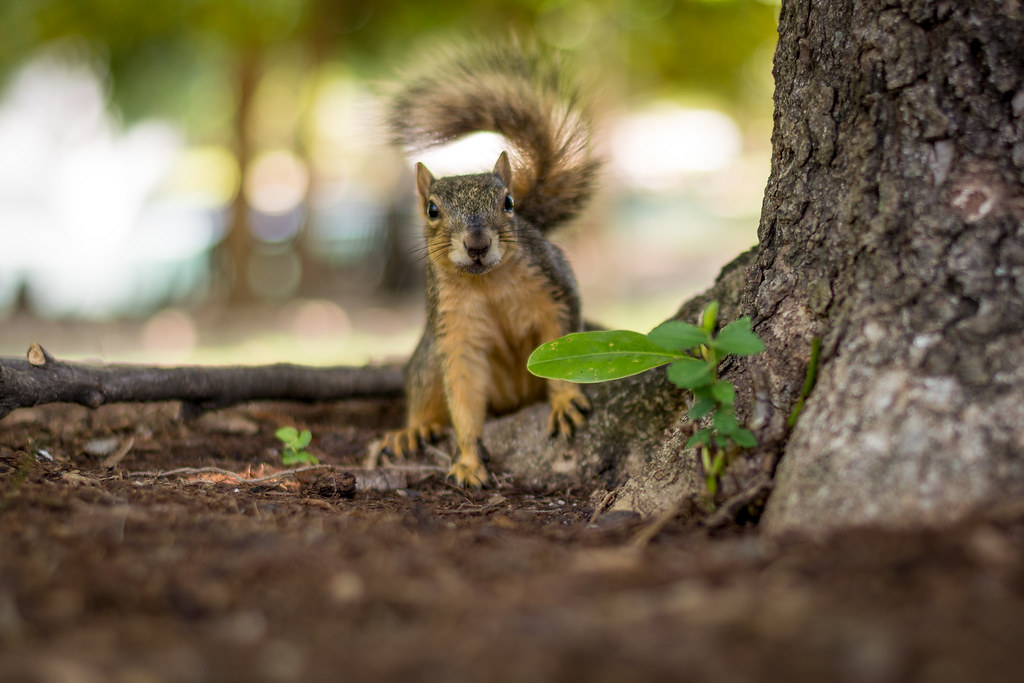 So…you know how last week I wrote about how going down to the pond to take photos of ducks and other waterfowl was almost like cheating? Well, here we go again! This is a squirrel right near Theta Pond on campus, and just like last week part of me feels like this picture shouldn’t even count because shots like this are almost too easy to get. My coworker and I went for a walk around the pond and she spotted this fella munching on some kind of nut or acorn, and as usual I had my camera with me which was, thankfully, my D7100 and not my D750 so I had the advantage of a little extra reach with the crop sensor. Squirrels near the pond are so used to people that they barely bat an eye when you walk past them which makes images like this seem almost a bit unfair because it’s not like this required hours of waiting or any real work whatsoever. But still, just like last week’s picture of a duck, I rather like this picture even if it is somewhat derivative. It was fun to take and I like the way it’s composed, so I’m posting it here because I can :)

I shot this at f/1.8 which regular readers know is something I generally avoid, but since I knew I wouldn’t be able to get super duper close to the squirrel I wanted to make the most out of whatever I had and try to get a shallow depth of field if at all possible. Even though the resulting image isn’t as zoom-in-to-a-hundred-percent tack-sharp as I would like, using the wide aperture gave me the bokelicious background I was going for and helped focus the viewer right on the eyes and face of the squirrel.

One weird thing happened as I was taking this photo, which I hope is not an indicator of a larger problem that might be down the road: my lens refused to autofocus, at least at first. I tried a few different options on the camera and checked that the lens was in M/A mode, but nothing worked. I was getting a little antsy because I thought this squirrel might hightail it outta there and I was in danger of missing what might be a really nice photo, so I quickly took a few shots while focusing manually. Then I took the lens off, put it back on, and everything worked just fine at which point I got the shot you see here. Much to my surprise though, the manually-focused images actually looked decent. Not great, but not bad either, and if I would have shot at f/2.8 or f/4 they probably would have been just fine. The takeaway for me was that I need to take a cue from the US Coast Guard: semper paratus. Always be prepared. If I had taken the time to double check my gear I would have fixed the problem before it even became a problem. Thankfully all’s well that ends well and I’m treating this as a lesson in what to make sure I do the next time :)