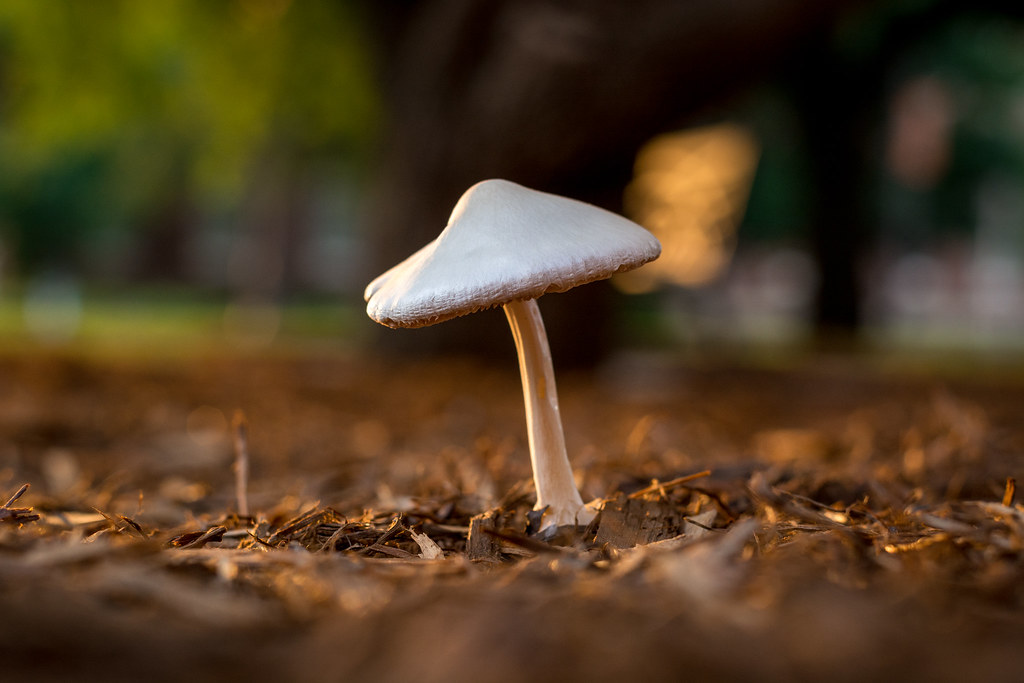 I got this picture quite by accident, as I certainly had no intention of waking up in the morning just to take a photo of a mushroom. Though come to think of it, that might actually be kind of a fun thing to try. Hmm. This image, however, was almost an afterthought and was only possible because of one of my cardinal rules of photography: bring your camera with you. I take my camera to work with me almost every day because I never know when I might come across some type of photographic opportunity, and as often happens I tend to find them more often than not. The day before I took this picture we had one of those rainy, overcast days that is just ideal for taking pictures and I saw a little mushroom poking through the ground cover just outside my office. 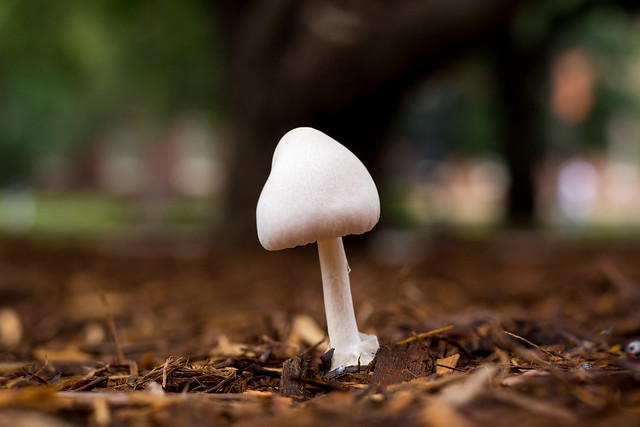 It was an interesting picture, or so I thought at the time, because of the way the relatively diffuse lighting cast a nice soft glow over the whole scene. I had to put my D7100 on the ground and use Live View to get this shot (a case in which my D750’s flip-up screen would have been much more useful if only I had that camera with me) and deliberately framed it with the tree in the background in order to give the subject a much greater sense of contrast. I liked this original just fine, and was honestly thinking about putting it up as a Weekly Fifty picture until the next morning.

As I rode my bike up to the office the following day I saw that my little mushroom friend was still there but had opened up a little more, as mushrooms are wont to do, and I figured I would use the opportunity to revisit the picture from the previous day. Just as I was adjusting my camera on the ground and trying to keep everything as similar as possible (same general composition, same aperture of f/4, etc.) a bit of sunlight started to peek out from behind a building on campus and gave the mushroom a fantastic yellow glow around the edges. I took three shots, reviewed them for focus, packed up, and went about my day. Later as I was editing the image I was struck by how much that touch of daylight added to the image, and how it turned what was originally a pretty decent (in my opinion) shot of a mushroom into something kind of special. The morning glow permeated the background and gave everything a nice warm touch that was sadly lacking in the original.

I’ll probably pass by this little bit of fungus on my way home and, if past experience has taught me anything, it will probably be wilting away. That’s how these things go though, and I’m glad I got the chance to capture it in its prime. Sure it’s just a boring simple mushroom, but I thought it made for a cool picture anyway.