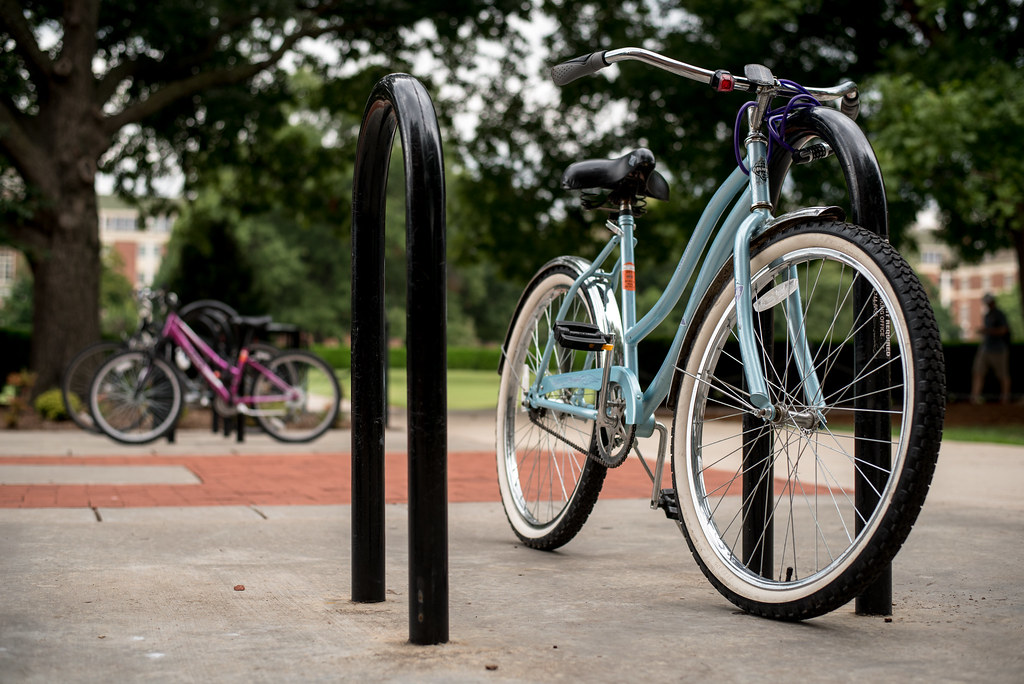 This week’s picture isn’t so much about capturing beauty, making art, or anything like that. Rather, it’s mostly just an illustration of a photographic principle I have been working on for as long as I have been interested in the medium. Framing and composition are two of the fundamental elements of picture-taking, and I shot this picture of two bicycles specifically as a personal exercise in order to work on these concepts. But first, as I sometimes do here on the blog, a bit of background…

A while ago I ran across this image on Instagram:

I found it when I was looking through the portfolio of a photographer named Eric Buller who had left a comment on one of the Weekly Fifty pics I posted to my own Instagram account. Turns out Mr. Buller started shooting with a 50mm lens because of this Weekly Fifty blog (I’m so glad you found this blog to be helpful, Eric!) and when I saw his picture of some bicycle wheels I was struck by the richness of the image, the colors of the bike forks and spokes, and the untold stories behind each of the two-wheeled transporters. I don’t know if go so far as to say I was inspired by it, but I certainly did want to use it as the basis for a few pictures of my own. There’s bikes all over the OSU campus and so one overcast Friday morning I went for a short walk around the school to see if I could get a similar picture.

Turns out I was way wrong, and no matter what I tried I just couldn’t capture an image with the richness of Eric’s photograph. Most of the bikes on campus are newer, shinier, and less colorful than the ones in the original which served to make most of the images I was taking look rather boring. When I saw the bike in this week’s picture above I realized that I could use that as the basis for practicing both framing and composition. It’s a far cry from creating an image like the one Eric posted, but it was a fun and useful photographic moment for me so I considered it a win :)

I knew I wanted to shoot the bike from the front and at a lot angle, but the tricky part was how to use the other elements in the composition to properly frame the bike. There were three main things in play: the blue bike in the foreground, the purple bike on the left side, and the vertical bike rack between them. I wanted to get an image that used the two latter elements to accentuate the former, but doing so proved to be a bit tricky because of one other, rather obvious, problem: students. They were everywhere, as you might expect, and I had to basically lie in wait until the shot I was looking for presented itself:

While this wasn’t bad I realized I wanted to add a dynamic element to the image by way of filling the gap between the blue bike and the vertical rack with a student. I waited for one to pass by and snapped another image:

Bingo! This was the shot I was hoping to get…except for one problem. As I reviewed my images I realized I had cut off the purple bike’s rear wheel, which made the overall composition feel somewhat amateurish. I was looking at the bike frame, not the tires, and thus failed to see the complete picture. I liked almost everything else about this, especially the smooth background thanks to using my lens wide open at f/1.8 in the first shot, but I needed to correct the compositional error. So I scooted over and waited for one of two conditions: one student passing through or none at all, both of which were a little tricky given the hustle and bustle of a college campus. I did get a shot where no students were in the frame, which I ultimately used as this week’s image, but before I could get any more someone rode on over and locked his bike up to the empty rack in the picture. Ah well, such is life, eh? :)

The whole exercise was a fun way to practice composition, and though I wish I would have been able to get a shot wide open with one student in the background and the two other bikes perfectly framed with the bike rack between them…it was, as Wayne Campbell said, “never meant to be.” It does give me ideas for future pictures, and many thanks to Eric Campbell for providing the impetus for me to get out and shoot some pics of bicycles. Keep up the good work man!