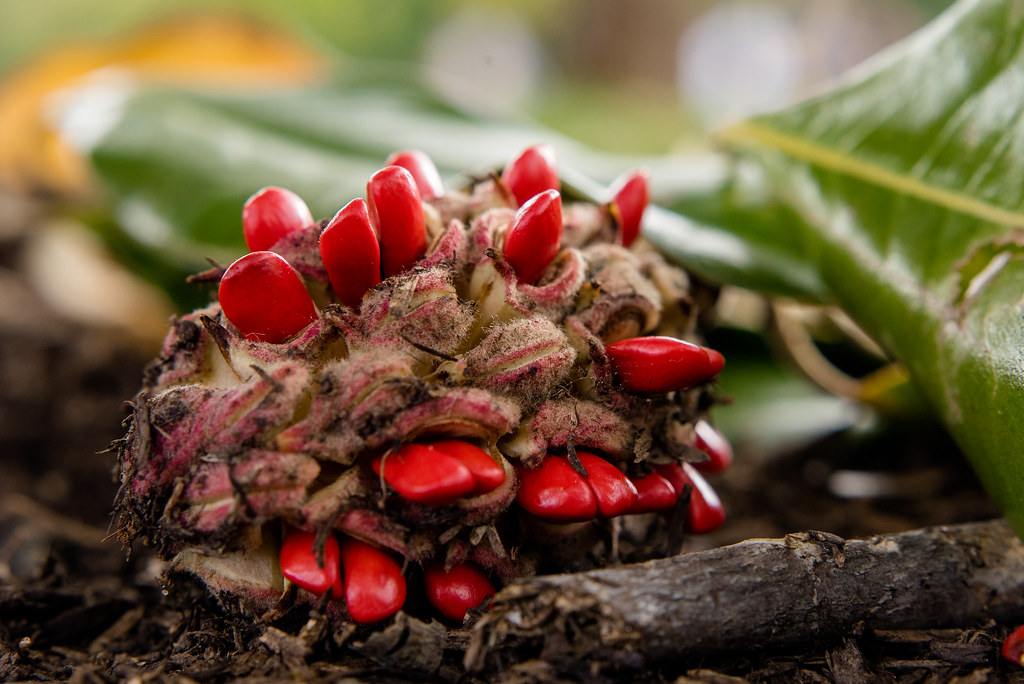 Well here you have it folks, the final in my long-running series of pictures of the magnolia tree. It’s almost a compulsion at this point since their flowers and seed pods are so…well, I guess they kind of run the gamut from beautiful to curious to downright frightening. But wherever you stand on that spectrum it’s hard to deny they make for fascinating photo subjects! These trees are scattered all over campus, and indeed all over town, and it’s hard to not take pictures of their flowers and seeds over the course of a year. Since this was the first season that I had my close-up filters to go on my 50mm lens I just couldn’t resist documenting the transition from bud to flower to seed, with this being the final image in the series. I hope you like it :)

These seed pods usually start falling to the ground in late October and as I went out with my camera to capture a picture of one I had a couple goals in mind. I knew I wanted to find a  pod with several bright red seeds sticking out, and I knew I wanted it to be already on the ground as opposed to still attached to a tree. I was hoping to get a bit of dimension to the picture in terms of foreground and background, and I purposely took my +4 filter so I could get close without getting too close. It took a few days but I finally was able to capture the image you see here and I am quite pleased with how it turned out. I took a different photo a few days prior to this one that was OK but not quite what I envisioned, so I went back out and was able to get this one which was much closer to what I was picturing in my mind.

One nice thing about my D750 is the flip-out screen which doesn’t come in handy all that often, but when you need it it sure is useful. I set my camera on the ground and used Live View with 100% magnification to make positively sure the shot was in focus how I wanted, and got a shot that would have been very difficult if not impossible with the optical viewfinder alone. I think it also helped to have  a clear vision for exactly what I was going for when I went to take this shot as it made the process more streamlined and…well, focused, if you excuse the pun :)

I shot this at f/5.6 and a few others at f/2.8 but really liked the wider depth of field and sharpness of the former vs. the latter. In my view it has just the right amount of foreground and background blur, and it illustrates the less-is-more lesson that I have been learning for years when it comes to things like shooting with larger apertures. Anyway, if you are tired of the magnolia seed photos rest assured you won’t see any for a good long while but come next Spring we’ll have to see what happens…