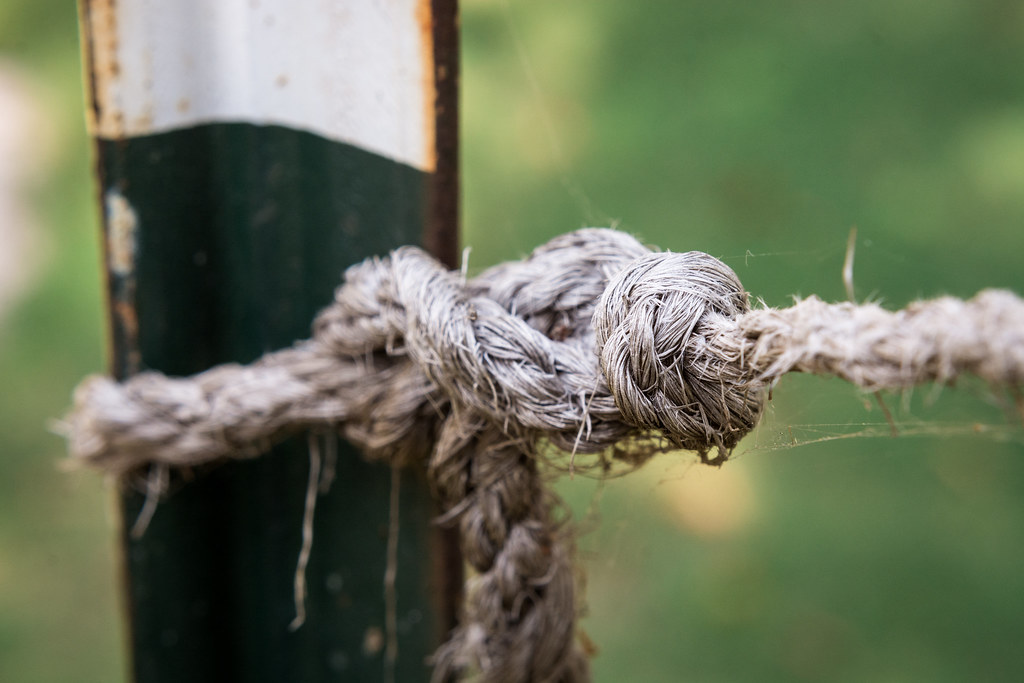 This picture was a bit of a departure for me in that I normally take close-up pictures of things in nature (flowers, plants, bugs, etc.) but when I was out walking around Theta Pond on campus one day I came across the rather innocuous scene of a young tree held in place by a few stakes and some rope. It’s quite common and, honestly, quite unremarkable and yet I thought I would see what I could do with my D7100, 50mm lens, and +4 close-up filter of which I have become quite fond. That particular filter, I have discovered, strikes a nice balance between allowing me to focus much more closely than normal without getting too close and thus obscuring far too much of the background or the rest of the subject.

One of the most important things I a continue to learn about photography is the power of restraint: You don’t always need to shoot at f/1.8. You don’t always need to shoot at ISO 100 or 6400. You don’t always need ultra-close macro-style magnification. You don’t need to take 100 shots when 10 or even 1 will suffice. You don’t need to share every single photo online. The list goes on, and because this lesson is something I am rather slow to learn this picture is not one that I would have ever gotten six months ago. I would have used my +10 filter (to get super close!) and shot at f/2.8 (to get super shallow depth of field!) and the result would have been a blurry disaster. Instead after learning to hold back and taking a more considered approach, I shot this image using my +4 filter at f/8 and got a much better picture.

I like the simplicity of this picture, with just two elements (the post and the rope) and a clear point on which the viewer should focus, that of the knot itself. I like the telltale signs of age: a fraying rope, rust on the edges of the post, and thin strands of a spider’s web. I also like how there’s a clear sense that something is happening here, or at least I hope it’s clear. The rope isn’t just dangling from the post, but being stretched tight as outside forces are clearly acting on it. It is serving a purpose, whatever that may be, and despite its ragged nature it continues to dutifully hold on. To hang in there, if you will, regardless of what else happens around it. I don’t know that there is any grand metaphor or larger story to tell here, but I am quite pleased with how the final image turned out.

I also tried a few things in the editing process in order to get just the right look I was going for. This is the original unprocessed RAW file:

It’s OK but not great, so I made a couple key edits in Lightroom:

And a few other things too. None of these were all that dramatic but the resulting picture is much more impactful because of it. In fact even learning to properly edit a picture has been an ongoing exercise in restraint, and I have had to learn the hard way that a few subtle edits are generally much more impactful than upping Clarity, Saturation, and Contrast. Basically if you were to assign a theme to this whole blog post it would be that less is more, both in photography and in editing, and it’s a lesson I will likely have to continue learning for many years to come :)