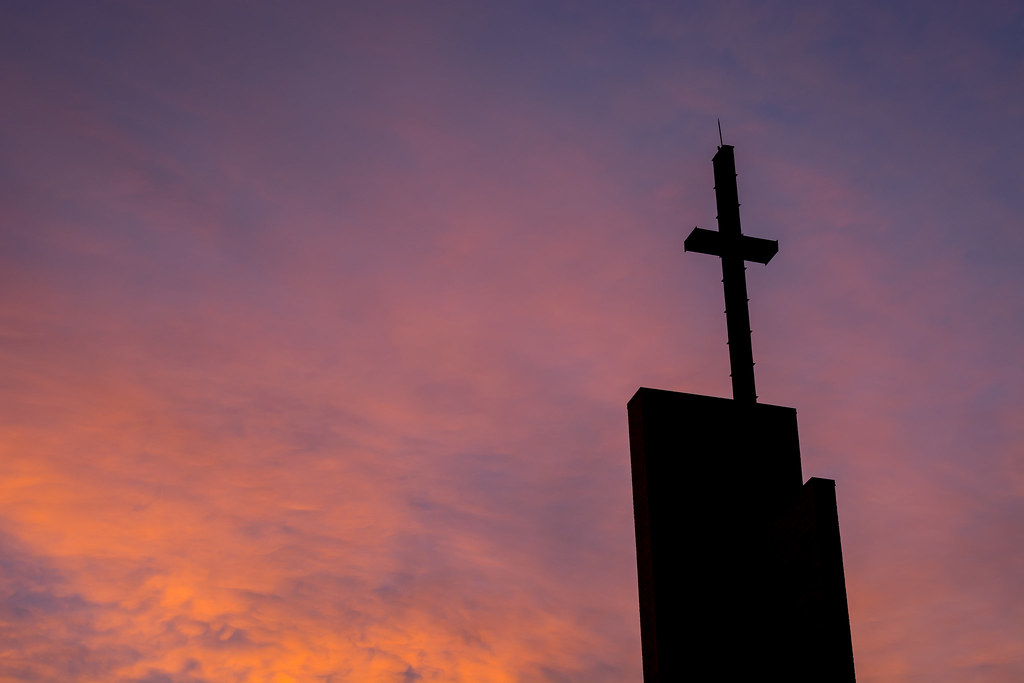 For this picture we’re going to go back to the basics with a fairly simple composition and some tried-and-true photographic techniques. No close-up filters, no long exposures, no full-frame-vs-crop tangents…just a horizontal photo with a single subject on the right-hand third dividing line. And like many other images I post here on Weekly Fifty, this one almost didn’t happen and would not exist at all if I had not brought my camera to work with me on a crisp Tuesday morning. There was even a moment before I left the house that I had my D7100 in hand and was about to put it on the shelf because I knew I had a busy day ahead of me, but decided I might as well bring it anyway just in case I happened to come across a photographic opportunity. Little did I know that such an opportunity would present itself before I even got to work :)

As I rounded the west side of Boone Pickens Stadium and turned south onto Monroe avenue I saw, about a block away to the east, this cross rising from the top of the University Parish of Saint John the Baptist. (You can see, using Google Maps Street View, the spot where I was standing to get the photo.) The sun was just starting to peek over the horizon which cast a nice orange glow on the clouds, and served to create a fantastic backdrop for this backlit monolith. I knew I had just a few minutes in which to take a picture, partly because I did not want to be late for work but also because I knew that the sunrise would soon be over and the deep oranges would be entirely washed out.

I parked my bike in the empty Gallagher-Iba lot and ran over to Hester street to take the picture. I shot it at f/4 along with my usual auto-ISO setting which resulted in a shutter speed of 1/180 and ISO 220. I know photos like this are best when taken at the lowest possible ISO and if my camera was going to go past 400 I would have shot in manual or just disabled Auto ISO, but as things turned out I was quite happy with the exposure my camera gave me. This is also one of those instances in which shooting with a 50mm lens on a crop sensor camera turned out to be a benefit since I didn’t really want the rest of the church, or the powerlines in front of it, in the shot at all and they would have been unavoidable if I was using my full-frame D750.

This didn’t require much postprocessing either, and what you see here is pretty much exactly what things looked like on the morning I made the image. I dialed down the black level to get a monochromatic silhouette, and adjusted the saturation just a bit, but otherwise this image hasn’t been changed much at all. Not that Lightroom adjustments are a bad thing, but in general I like to use a style of editing that gets the final image as close as possible to what I saw in my mind’s eye when I took the shot, rather than creating some kind of hyper-real HDR-style image that couldn’t actually exist in real life.

Finally, it is no coincidence that I am posting this image a few days before Christmas. In a few days we will celebrate the birth of our savior Jesus Christ, and while the image of a newborn baby wrapped in swaddling clothes lying in a manger is certainly worth treasuring and pondering, as Mary did many years ago, it’s also important to remember the reason He was born in the first place. It was so He could take the punishment for our sins all the way to the cross, where he would die not for anything He did but for everything we have done. You can’t have Christmas without the cross; the two are forever intertwined and the one leads directly to the other. So in a sense, this image of Jesus’ instrument of crucifixion could be said to be the best Christmas greeting I could offer to you, my readers. Merry Christmas to all of you, and may you reflect on both the manger and the cross now and throughout the new year.