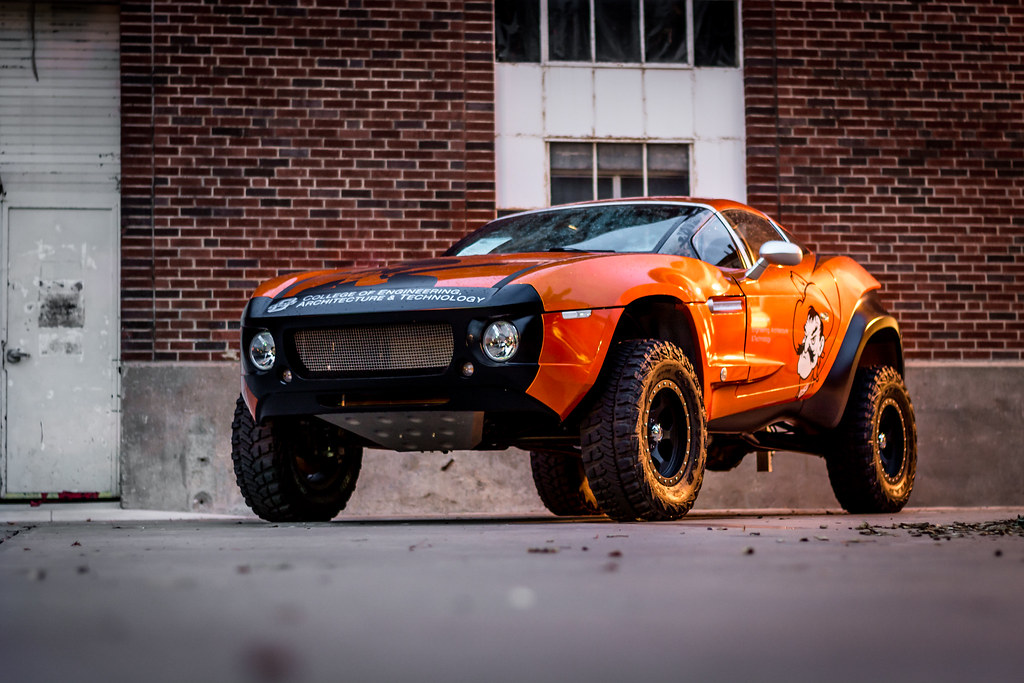 This image is quite a departure from the close-up shots I was posting during the final months of 2016, and it’s been kind of fun to take those filters out of my bag and force myself to sue my 50mm lens as just a plain ol’ lens once again without any additional modifications. I shot this with my D7100 when I spotted the vehicle while biking through campus on the way to work a little while ago and really liked how the morning sun was casting such a nice glow on the car while keeping the whole scene overall somewhat subdued. I tried to keep in mind a few things I learned when taking this shot of a Tesla Model S but ran into a couple of issues that made this a little different.

1. Lighting…or the fact that there simply wasn’t much. It meant I had to shoot at f/1.8 which I normally don’t do, but it worked out fine here since I needed a shallow depth of field for the type of shot I was going for.

2. Crop vs. Full Frame. I shot the Tesla with my D750 which meant that I could get much closer to the vehicle and, as a result, get a shallower depth of field. I shot this off road racer with my D7100 so I had to stand back a bit farther in order to fit the whole thing in the frame so my DOF was a little wider.

3. Shooting position. I tried using the viewfinder to get this shot but ended up literally laying down on the ground and shooting in Live View. Sometimes you just gotta do what you gotta do.

4. Camera shake. Since the lighting was so dim I had to use a slow shutter speed which meant the image was most likely going to be blurry. I wanted to keep the ISO low (I used 200) because I knew I would be doing a lot of editing in Lightroom, and I also dialed in -2EV for exposure compensation so the overall scene would be a bit dark but the highlights would be properly exposed. This allowed me to raise the exposure and bring out details in the shadows while maintaining the integrity of the bright spots on the car.

I used a 2-second timer and set my camera to take 3 shots with half-second intervals because I figured that would increase my chances of getting a blur-free image. And for the most part it worked, though if you zoom in super close you’ll notice that the lettering on the car is just a bit blurry. Oops :) I ended up with an exposure of 50mm, f/1.8, 1/6 second, ISO 200 and it really was just dumb luck that the shot turned out as clear as it did.

My editing on this image was a bit more heavy-handed than usual, and you can see the original here:

I purposely kept the door in the frame because I liked the sense of context it added, and went so far as to remove the two signs behind the car (albeit in Lightroom, not Photoshop, because I didn’t really care enough to do a pixel-perfect job on the Reserved Parking sign) which I normally avoid altogether. All in all this was a fun image to take and edit, and who knows…maybe one day I’ll get to see this car actually driving around instead of just sitting there :)