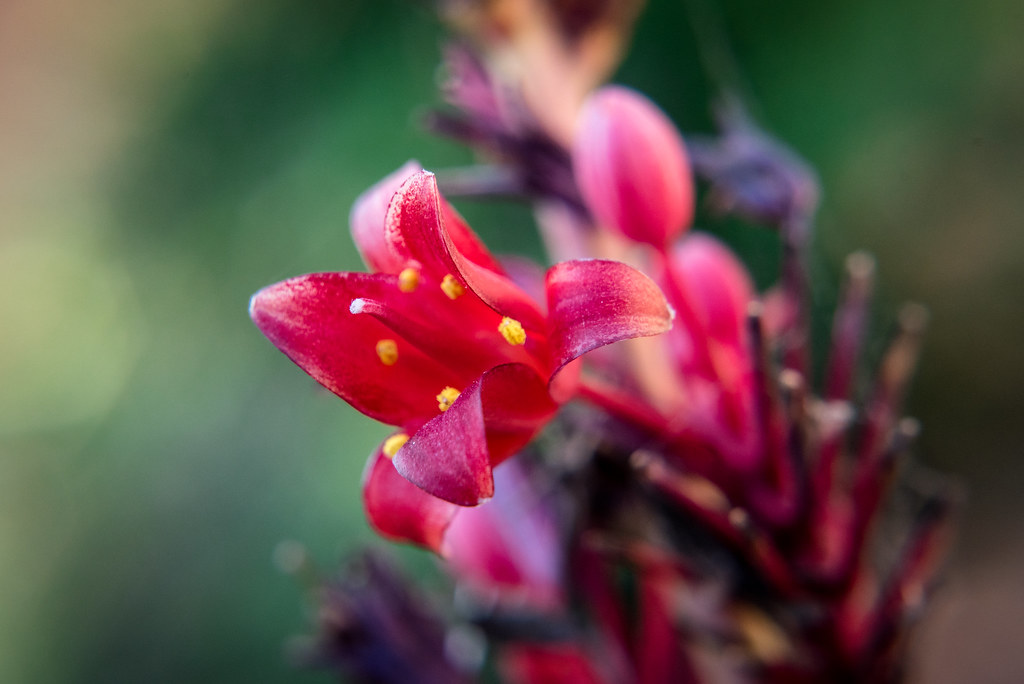 I thought this image of a red yucca flower might be a fun way to ring in the new year here on Weekly Fifty. It’s not a lily despite its similar appearance, because what you’re looking at is a very big image of a very small flower. I shot this using my D750, 50mm lens, and +10 close-up filter (f/8, 1/250, ISO 1400) which means the actual object is only about the size of a dime. What I found somewhat fascinating about this particular plant, other than all the beauty and detail contained in such a small entity, was that it was literally right outside my building at work. I took this picture on an unremarkable day outside an unremarkable brick office on the campus at Oklahoma State University. Before shooting the picture you see here I had walked around for about 10 minutes looking at trees, flowers, leaves, people, bicycles, and other subjects that I thought would make for interesting pictures but came back without any noteworthy images. Not that I took zero photos, but just that none of them were all that compelling to me.

When I walked past this yucca plant (which has been the subject of a few other Weekly Fifty images over the years) I was struck not just by the flowers but by the rest of the colors in the scene. I think that’s probably what made me want to share this image here instead of letting it gather digital dust in my Lightroom library, and it’s something I want to keep in mind with other images too. There are basically three swaths of color in the frame: green on the left, crimson in the middle, and dull brown or purple on the right. Initially my idea was to photograph the flower in such a way that the deep red color would stand out against the red brick of the building behind it, but those resulted in images that seemed too plain and uninteresting. Then I re-framed the shot so the flower was in front of a sea of green (which are other bushes and the leaves of a golden rain tree) but that didn’t work either since the flower kind of appeared to be hovering awkwardly in the middle of the frame. This one works the best, in my opinion, because the green and burnt umber tones show that the flower is part of a much richer context than just a field or just a building. As an example, here’s the same flower (image is mostly unedited, with just a few basic color tweaks) with my building showing much more prominently in the background:

It just doesn’t look as interesting, and the flower punches through the middle of the frame without much else to help weave it into the larger tapestry of the image as a whole. The cross-hatches of brick and mortar in the background create an awkward sense of angular geometry which contrasts severely with the rich texture and curves of the flower. In short, this image just doesn’t work–at least not in the same way that the top one does.

So anyway, with all that being said..happy new year to you! I hope your 2017 is off to a bright start and things are only looking better. Cheers, God bless you, and here’s to another turn around the sun :)