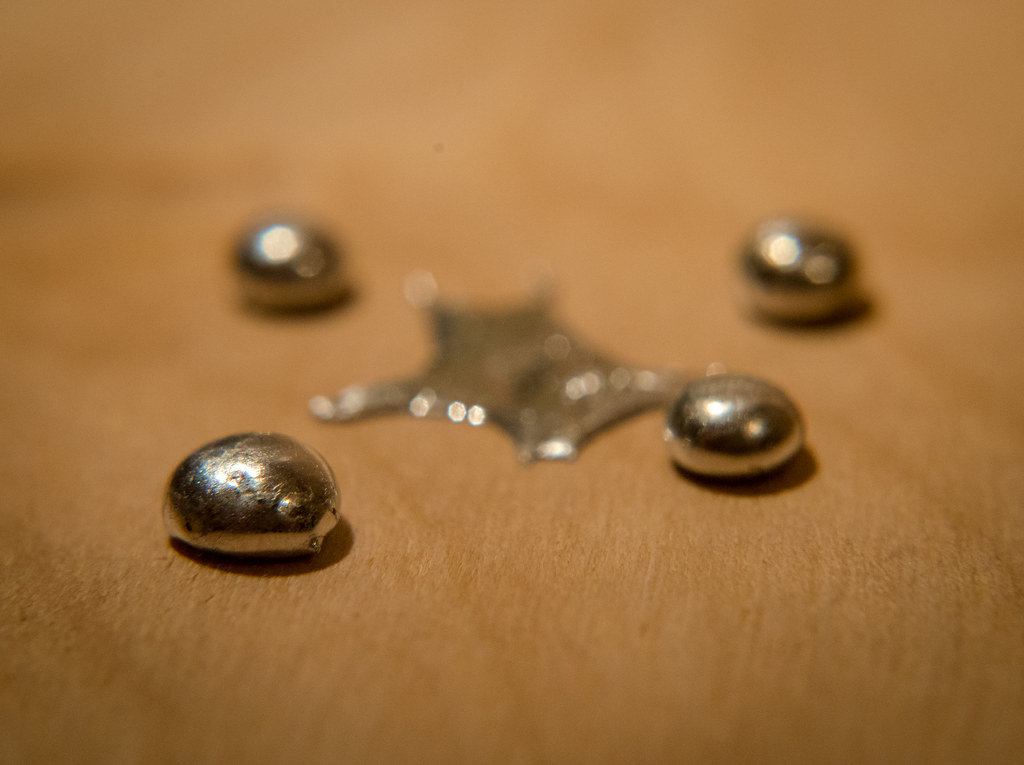 The idea for this picture came to me when I was showing my soldering gun to my two boys recently, and letting them see how the solder melts and drips when exposed to a heat source but soon afterwards becomes cool to the touch and quite strong. To illustrate this I brought out a piece of 1/4″ plywood I had lying around and let them watch as I dripped some bits of solder on to it, which they thought was pretty neat. As we sat there on the floor of our kitchen I realized that the drips of solder might make for an interesting picture so the next morning I got out the same board and a few balls of solder that were still left, put them on the counter with some task lighting shining down (this was about 5:45am, long before my wife and kids were awake), and busted out the ol’ D750, 50mm lens, and set of close-up filters. The result, what you see here, is not really all that cool and a big part of me didn’t even want to post it here because it’s kind of a blurry mess but I figured I would anyway because it fits with the spirit of Weekly Fifty which is all about getting out there and taking pictures, trying new things, and not letting my camera collect dust on a shelf.

The main issue I have with this image is that I had to get super close to the solder drops, which meant I had to use a +10 and +4 filter, which then meant that I had to use a wide enough aperture to get any decently-large depth of field…but I was shooting handheld so all this was quite challenging. On a tripod in a more controlled environment I could have used a self-timer along with a small aperture and lower ISO and not worried about shutter speed at all, but as it stands this picture was taken at f/9.5, ISO 2000, at 1/125 second to minimize handheld blur. Even then the depth of field was, as you can see, about 1/8 inch and I would really have liked to have it be much wider but a smaller aperture would have meant a slower shutter or higher ISO–neither of which was something I wanted to do.

In my mind this picture is less about the photo itself but more about the process required to get it, and someday it would be fun to revisit this with a lot more control over the elements. Until then I’m going to keep shooting away, hopefully trying new things and keeping my camera off the shelf, and see what happens :)