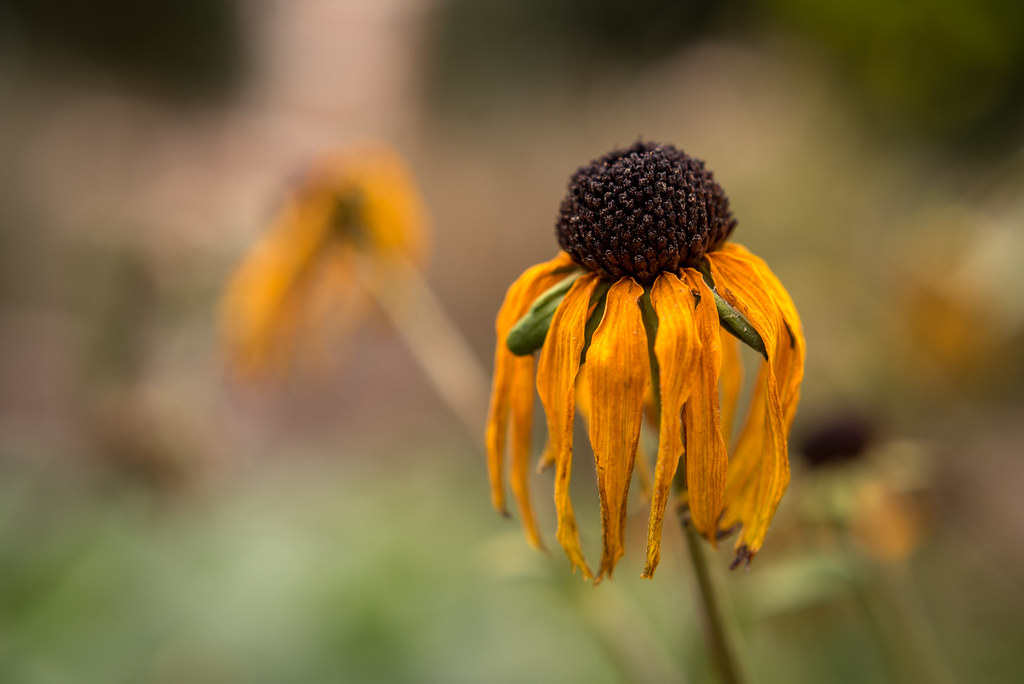 One of my favorite types of picture to take in the last few months has been close-ups of flowers, thanks to my +10 and +4 filters, but the trouble with shooting photos like that in the winter months is the relative lack of color and greenery. Such was the case when I took my camera out on a mini photo-taking expedition (read: a five-minute walk out in the cold) one afternoon in late December. I was determined to find a photo opportunity despite the relative lack of color and interesting subjects, and it wasn’t too long before I came across this wilted yellow flower.

The first few shots I took were from almost straight above, but the more I looked at these the less interesting they became. They didn’t have any depth or character to them, and the image of a wilted flower from above just wasn’t all that compelling. I soon knelt down and shot this from the side, intentionally composing the picture with another flower behind and to the left, and then it was a matter of which exposure settings to use. I have long since realized that my favorite filter is the +4 (I save the +10 for rare situations where I need to get reeeealy close to my subject) and I like the way it lets me hone in on a subject without getting too crazy, while also having a nice degree of control over depth of field. For this image I used the +4 filter on my 50mm lens at an aperture of f/4, and focused on the center part of the flower to get it nice and sharp. It worked pretty well except for one thing: the foremost wilted petals are not in focus. A quick check of my LCD screen on location would have told me as such and I could have easily stopped down to f/5.6 or f/8 and gotten almost exactly the same image without the blurry yellow petals…but alas, that’s how things go when you’re taking pictures. You always realize the one thing you could have done to kick your image up to 11 after you’re already finished. Well, maybe not always, but sometimes it feels that way. And in those situations it’s best to learn from your mistakes, enjoy the pictures you got, and promise yourself you’ll do better next time.

I mentioned at the top of this post that when I set out to take a picture I didn’t think there was much in the way of natural photo opportunities available, and one thing I have learned over the years is that it’s often these types of situations when my mind tends to get a little more creative. If ample photogenic situations present themselves readily in a given setting, such as on a walk through a park on a summer afternoon, I tend to find myself shutting down and retreating to a place of mental incapacitation. If, as the saying goes, everything is a good photo opportunity then nothing is. Or so my mind tells me from time to time. So ironically I have found that in situations where I have to work harder and look closer for pictures, it’s those times when I find myself seeing things I would not normally notice. It’s a fun experiment to try and I recommend it the next time you think you are in a situation with nothing interesting to photograph. Grab your camera anyway, look closer at the world around you, and see what you can find :)