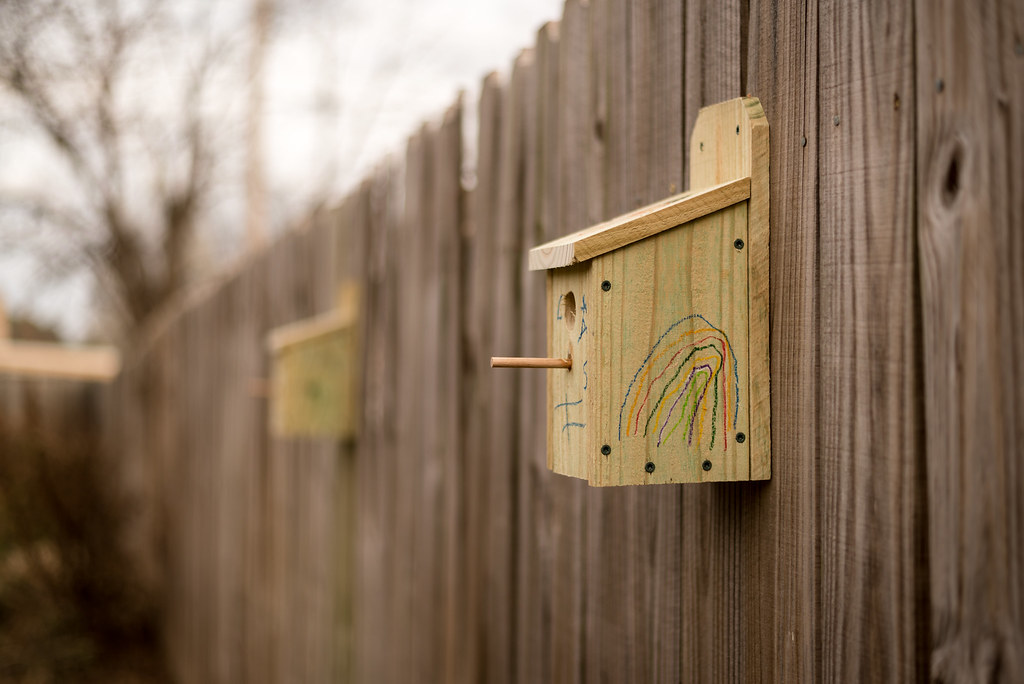 Most of the pictures I’ve been posting here lately have come about through sheer happenstance and are the result of some kind of serendipity, good timing, or even just random task…er…chance.. Not this one, though. I specifically set out to take the picture you see here, not because it was especially artistic but because it has a degree of personal meaning and significance. So, of course, there’s a bit of a story to be told as well :)

Years ago when we moved in to our house one of the existing accoutrements in the back yard was that of a couple of bird houses. Not knowing anything about feeding our little avian friends, my wife and I just let them sit attached to the fence where they remain to this day, and each Spring a pair of little birds (I have no idea what kind) makes a nest in each small little wooden dwelling. This year I wanted to try something new so I found some plans online for making bird houses of our own. My boys, ages 5 and 3, thought this would be a cool idea and it also gave me a chance to use some power tools which is always a good thing. I searched many websites and finally found these simple plans for a Blue Jay house which I tweaked a little to fit my own preferences and materials.

Originally my boys and I made a house based on those plans but using some spare pickets that have been sitting in the corner of our yard ever since we bought the house. Though the lumber wasn’t decaying, it was rather brittle and we soon realized that it was not at all suited for any type of construction because it simply split apart whenever we drove screws into it. Even with pilot holes. Yeah…not good. So we went to the hardware store and got some 6′ by 5 1/2″ fence pickets for about $1.60 each, a box of 1 5/8″ deck screws (the self-tapping kind which don’t need pilot holes. Whee!) and set to work to make what you see in this picture.

It took another few prototypes before we got comfortable with the final product, and our kids were really happy with how things turned out. We tried spray painting one of the prototypes so we could decorate it, but that proved to be somewhat of a fruitless endeavor because the wood soaked up so much paint that multiple coats would be required after which my finger really got sore from pressing the nozzle on the paint can :) For these two bird houses, our boys just got out some crayons and made drawings on all sides which is what you’re seeing in the picture. According to my oldest son the illustration here is a rainbow, and I thought it would make for a fun picture that would recall some special memories long after the wood decays and the color fades away.

Ever since my boys were little I’ve tried to involve them in handyman projects, from replacing outlets to painting walls to cutting down trees. I don’t let them use some of the bigger tools in my garage like my table saw or miter saw, but they do enjoy getting their hands dirty with other tools like my drill and sander, and then cleaning things off with the air compressor. Hopefully projects like these bird houses will help show them that they can use their own two hands to create objects that are beautiful, functional, and help others–even if it’s just our small little feathered friends. Now all we need is a blue canary to inhabit these things. Maybe I can find one in the outlet by the light switch.