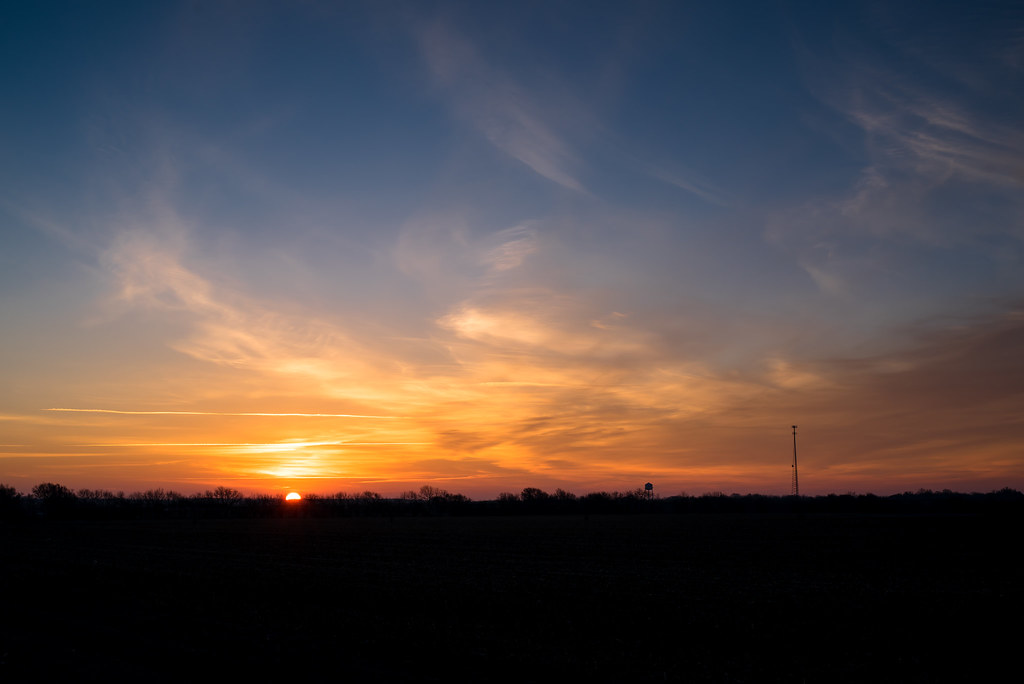 Every now and then when I make it back to Nebraska I like to take a route that’s a bit slower than the interstate. Maybe I’m old, or maybe I just like looking for photo opportunities, but when I was younger I took the Ian Malcolm approach of “must go faster.” Nowadays I like to go with a journey-is-the-reward approach and take my sweet time, and one of my favorite roads to travel is Highway 77 which winds north through Kansas among lots of small towns and even a few lakes. It’s not the quickest route but I think it’s only about 20 minutes shorter than Interstate 35, though that’s if you don’t get stuck behind a John Deere tractor along the way :)

When I was up north (which, to an Oklahoman, means some place like Nebraska) several weeks ago I once again drove-slash-ambled along 77 on the way there as well as the return trip, except on the way back home I left town at 6:30am so I could still have some time with my wife and our kids before the little ones went to bed. As I watched the sky change from inky black to burnt orange over the course of the first hour of my trip I kept wanting to stop to take pictures of the wee hours before sunrise, but nothing was really working out how I wanted it to. (I also didn’t want to dilly-dally too much or else I’d be wasting my early rise.) Trees obscured the horizon, buildings and power lines ended up jutting through the frame, and as the sky got lighter and lighter my chances got slimmer and slimmer. I was just south of Beatrice, right about here in fact, when I saw the sun juuuust starting to peek over the horizon in front of me and knew that this was my chance. I quickly pulled off the road, grabbed my D750 + 50mm lens, and ran off to the side of my car to snap a few frames. I shot several at f/8 and a couple more at f/11, all while maintaining an ISO of 100 in order to get the richest colors possible, and in the space of about a minute and a half I was able to get a few that I liked before the sun rose too high and ruined the moment.

It was a bit of a tricky situation for one reason, really: composition. I didn’t want the sun to be in the center because those shots (imho) are a little boring, but I didn’t want it too far off to the side or it would seem weird. I also looked for some other elements to feature in the frame but wasn’t sure how high or low to place the horizon itself. What I’ve ended up with is a near textbook example of the efficacy of the Rule of Thirds: the horizon, the sun, the radio tower…it’s just about as Rule of Thirds-ey as you can get. And to be honest, that’s not a bad thing. Sure you can always try new things and break the old conventions to get interesting and exciting shots, but with just a minute to get the shot I went with the same old tried-and-true compositional method that always just gets the job done. This shot won’t win any awards but I like it, and as I’ve mentioned here before, that’s really all that matters to me :)