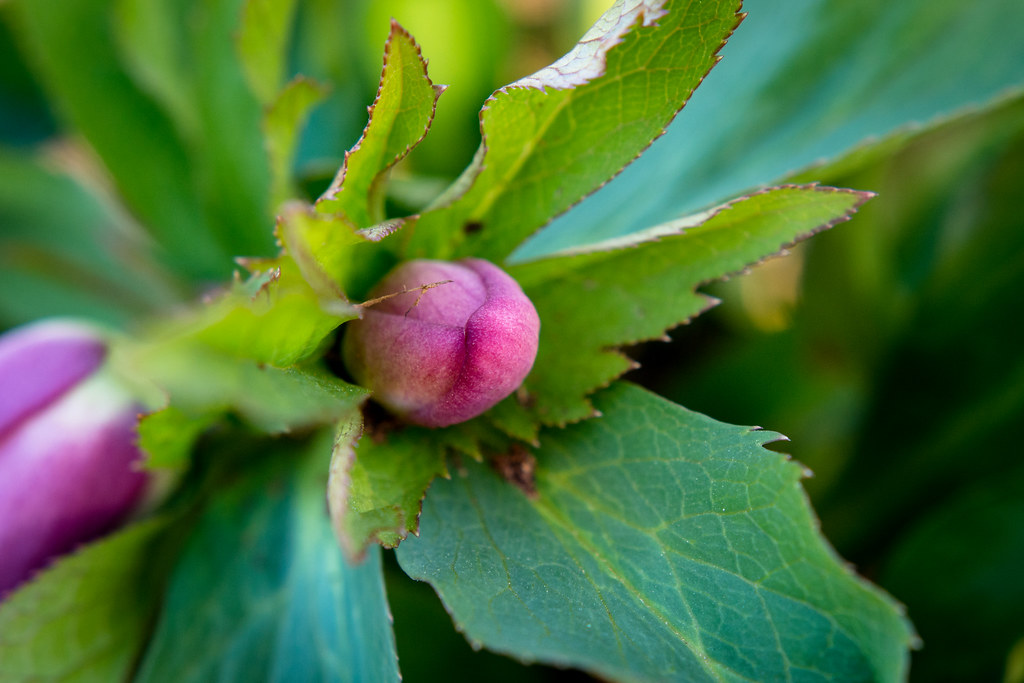 Sometimes you never know what you’re gonna get, whether you’re eating a box of chocolates or going out for a quick walk with your camera. In fact I think by this point I should probably consider changing the name of this site from “Weekly Fifty” to “Five Minute Walks Around Theta Pond” since that seems to be where so many of these pictures come from. I took this on a particularly pleasant afternoon in February when the weather was in the mid 60’s, and it was one of those times that seems as though it’s tailor-made for snapping a few pictures. Armed with my D7100, 50mm lens, and a few close-up filters I was determined to get a few good shots while the sun was shining.

After a few minutes of walking, which also included a couple pictures of some yellow flowers I might post here in the coming weeks, I saw this purple…um…something-or-other. Perhaps it’s a tulip? No, that’s not right. A lily? I honestly have no idea. To me it looked like the monster in the sarlacc pit in the special edition of Return of the Jedi. (A version I own, have seen, but refuse to watch anymore due to the inclusion of the heinous Jedi Rocks scene in Jabba’s palace. #maxreboband #sysnootles #neverforget #despecializedtrilogyftw.) Whatever it was, I wanted to get a picture so there were a few things to think about:

• What angle do I shoot from?

• What aperture do I use to get the desired depth of field and sharpness?

• What do I want in the foreground and background for context?

On a shot like this shutter speed and ISO are mostly irrelevant because there is so much light, but it was still a lot to consider in just a few seconds of time. I knew I wanted the viewer’s attention to be drawn to the bright purple flower but if I shot it straight on it would lose a sense of depth and context. However if I stood too far to the side the leaves would get in the way. I chose this particular composition because it not only contains a bit of foreground and background elements, but also another flower on the side to add a bit of additional color to the scene and make the central flower feel less isolated.

I used my +4 filter at f/4 (seriously, the 50mm lens, +4 filter, at f/4 is magical. Give this combination a try if you are able to.) and got a picture that was almost exactly what I was hoping for, which isn’t always the case when I go out shooting. I’m super pleased with how sharp everything turned out, and if you pixel peep at 100% you’ll even notice little drops of condensation on the leaf at the bottom of the frame. Sometimes when I shoot subjects close up I find myself having to use live view to get the focus right, but this was either using the in-viewfinder autofocus or me just focusing manually. I honestly don’t remember but either way I like the result and I hope you do too :)