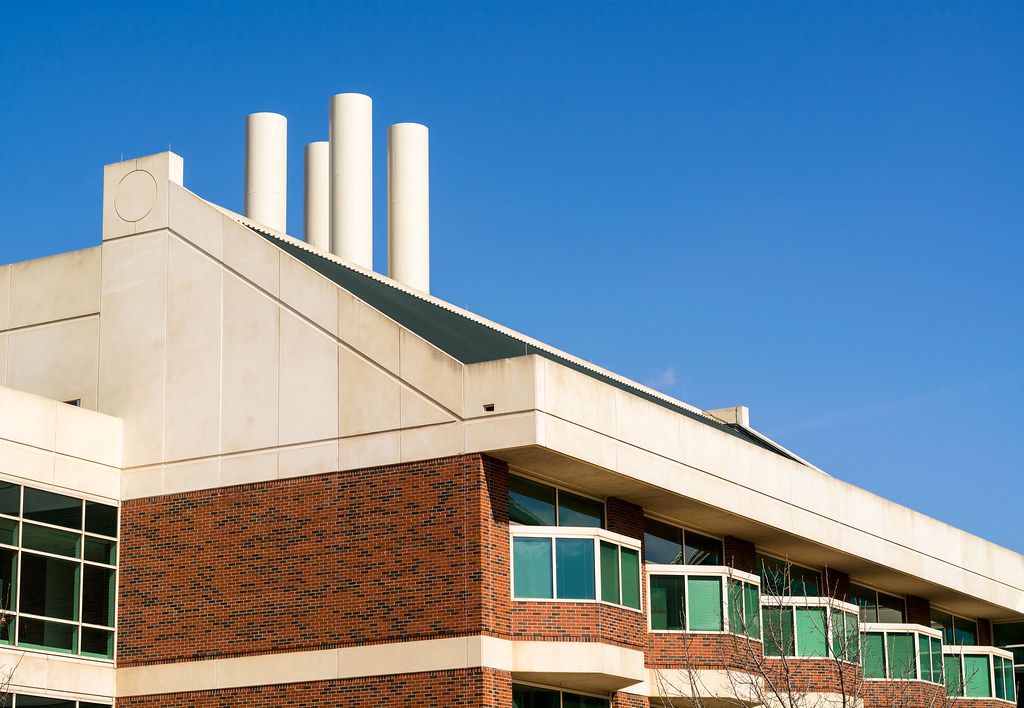 Sometimes it’s the familiar things in life that would make such good photos, if only we weren’t so used to seeing them on a daily basis. Such is often the case with me as I walk around my home, my neighborhood, or even the OSU campus where I work and one thing I try to do to combat the overwhelming sense that there’s nothing interesting to photograph is to force myself to take a picture of something. That’s kind of what happened here because normally this building, part of the Noble Research Center, is something I would just pass by and about which I wouldn’t really give a second thought. I mean…it’s just a building. What would possibly make it an interesting photograph?

The answer to that depends on whether you even accept the premise of the question that it is an interesting photograph in the first place. It might be, or you might not like it at all. Either way I promise you I intentionally used several photographic techniques here to get this specific shot and I’d like to share them with you. So here we go :)

While it’s true that this is, on one hand, a rather unremarkable brick-and-mortar structure, it’s the four columns on top that make it stand out as something more. I don’t even know what they are, since this certainly is not a factory or coal-burning power plant. My guess is they help draw away fumes or gases from the labs housed in the NRC but whatever they are, they sure do look interesting. I knew I wanted them in the shot, but as longtime readers might know I also had to get some context in there too. I shot this with my D7100 so I was working with the limitations of a crop-sensor camera, and decided that I wanted to shoot the building from an angle because it was much more interesting to see it receding back into the bottom-right corner of the frame as opposed to a picture from the side or front. I think the angle helped add a bit of dimensionality to what might otherwise be a rather dull photo.

I also wanted the structure to feel somewhat imposing, so I retreated as far back as I could while still maintaining a sense of scale. If I moved back much father, other objects like trees and neighboring buildings started to creep into the sides of the image, which tended to draw the viewer’s focus away from the pillars. One of my ideas here was to make the building seem taller and larger than it actually is in real life, which was done (I hope, anyway) through the use of composition alone. By moving myself and positioning my camera to get this photo with its receding lines and vertical pillars I hope I have given you, the viewer, the idea that this might be something more than it actually is.

In the end I’m not sure if this is a picture I would necessarily call interesting, special, or noteworthy in any way but it was fun to experiment a little and, if nothing else, I got my camera out of my bag and in my hands which is always a good thing :)