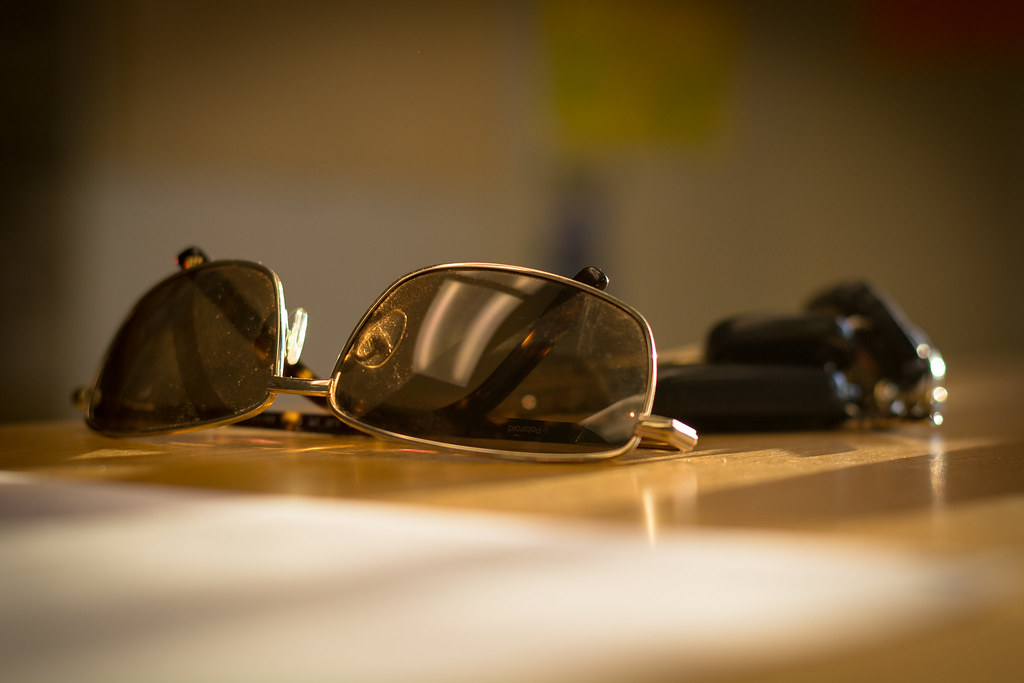 If the title of this week’s photo seems rather unremarkable, it’s because the subject matter depicted in the picture is equally unremarkable. It’s a pair of sunglasses I got at Ross for $11, and behind them you can kind of make out my car keys while the foreground contains a document I had printed off for a meeting. I snapped this picture after I got to work on a recent Thursday morning when the sunlight was just beginning to creep in through my eastward-facing window, which cast a calm yellow glow over everything in my office and pretty much the whole of Stillwater for a few precious minutes. I realized that the stage had been set for a quick photo opportunity, so I grabbed my D7100 + 50mm lens and started clicking away.

My first thought was “I need to move those keys!” but then I started thinking about where that would lead, and I didn’t like how it ended up. I thought if I moved the keys around it might create a more pleasing composition. Then I thought I might move the paper a bit. And while I’m at it, I should reposition the sunglasses to catch some more like. And I could shift the entire scene a bit to capture more of the sun’s rays. And the background should probably be changed too…and on and on. I had this little internal debate for about 15 seconds before I shut the whole thing down and just took a few pictures of the scene as-is without changing anything. I realized I didn’t want to create a scene, so much as I wanted to capture a scene. What you’re seeing here is exactly what my desk looked like when I walked through the door and set my keys and sunglasses down, and I think there’s something to be said for photos that capture an image of things as they are as opposed to how we would like them to be.

Granted this is just one little example with a few inanimate objects, and one could of course argue (quite correctly) that there is still a great deal of manipulation going on here. I chose to shoot this at f/2.8 in order to get a shallow depth of field. I chose to have the foremost nose guard in focus. I chose to shoot from a low angle, a short distance away, in order to get one particular perspective. I even chose to edit the picture in Lightroom and make a few tweaks to the white balance and other settings. And if I’m being entirely honest I did actually move a couple of miscellaneous office trinkets (I think one was a binder clip, perhaps) out of the way so as to not clutter the frame.

What you have, then, is an artificial construct that represents an organic scene. In one sense nothing was manipulated, and what you see here is as it was. But in another sense, lots of things were manipulated and what you’re seeing here is not at all like how things actually were. But that’s the beauty of photography and indeed all art: it is what you want, and others can interpret it however they see fit.

I realize this is kind of a lofty discussion over what is, essentially, a quick snapshot of a pair of cheap sunglasses, but sometimes I do get to thinking about the power we wield as photographers, the artistic choices we make often without thinking, and the message we are choosing to convey simply by snapping the shutter. And with that I hope you, after you’re done reading this, go grab your camera, take a few photos, and see how you can convey the world around you :)