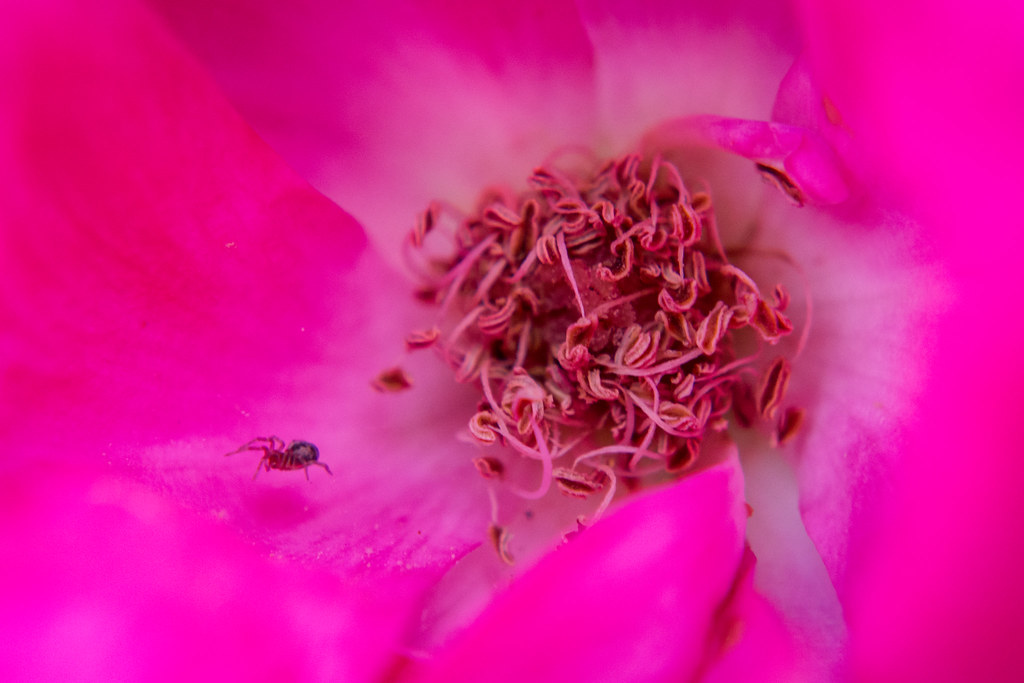 Ah, yet another in the long-running series of shots brought to you by my set of close-up filters. This one was a bit of a surprise for me for a couple of reasons, not the least of which is the sheer amount of pink and red in the image. I mean, wow. It kind of hurts my eyes just to look at it which is why I nearly dismissed the picture entirely upon seeing it in my Lightroom catalog. And yet I decided to keep it, edit it, and ultimately post it here on Weekly Fifty because of reason two. When I was looking around one of the gardens on campus armed with my D7100, 50mm lens, and close-up filters I was only looking for some flowers and not anything in the way of animal life since at this point I’ve basically ruled out the possibility of capturing bees, bugs, flies, or anything of that nature with the skill and equipment I have. I mean seriously, when there are photographers who can do stuff like this, it simultaneously inspires me while also making me want to chuck my camera in the trash because I’ll never be that good.

But as I often tell my five-year-old son, it’s not a competition. If I’m using my camera to capture images I like, then it’s all good. Hopefully I’m also getting inspired and challenged by other photographers and using their works as creative outlets to explore personally, and that all goes back to Reason Number Two which you might have noticed I haven’t exactly articulated  yet.

See that little bug in the lower-left of this photo? I kid you not, I didn’t even notice it (he?) was there when I shot the image. He must have been about 1/8″ long and I was concentrating so much on the center of this rose that I didn’t even notice the insect crawling outwards towards the sunlight. It was only afterwards in Lightroom that I saw the little fella boldly bolting towards the outskirts of the flower, and thought it added an interesting dynamic element to an otherwise fairly simple shot. I’m a little disappointed that the bug is not in focus, but it’s close enough and while I wouldn’t go with close enough when working with clients, it’s just fine here since I see it as a demonstration of my learning and photographic progression.

I do think I need to take more time and really see the world around me, especially when shooting subjects at close distances, and now I wonder how many other little hidden secrets like this I’ve been missing. It makes me want to get my camera out and start crawling around on the ground just to see what I can find :)