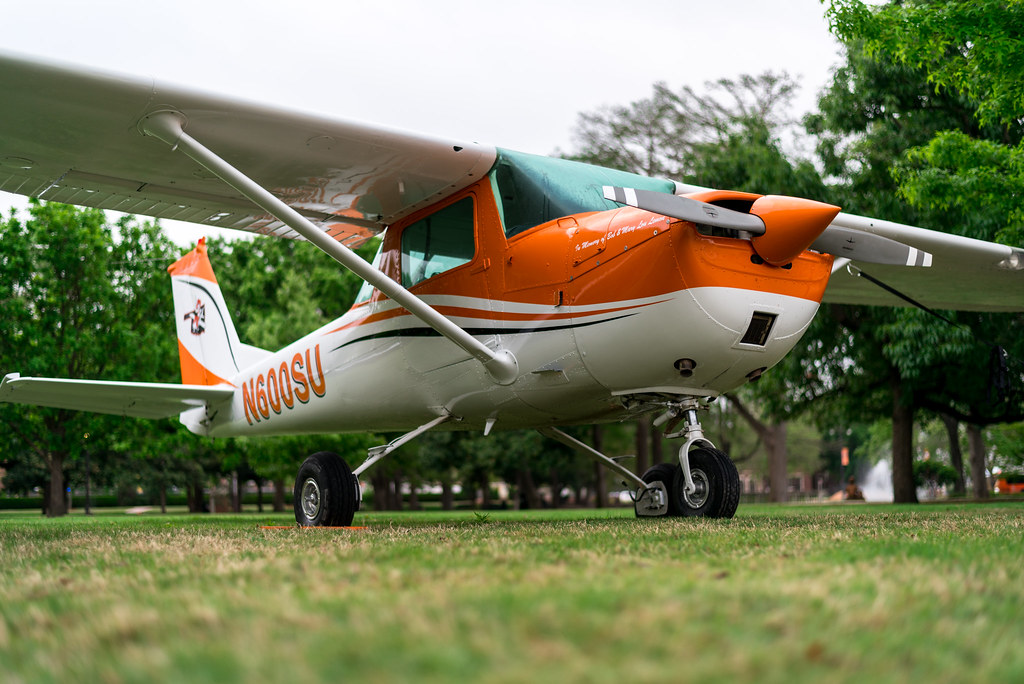 Sometimes I write about how unique and fascinating it can be to work on a college campus, and this shot is a good example of what I mean by that. There I was, walking to work on a drizzly Wednesday morning when lo and behold I came across an airplane sitting in the lawn just north of Theta Pond. (Look closely in the background and you can see one of its fountains.) At first I was a bit confused, and then when I noticed a tent on one side and a hammock on the other side, I was even more befuddled. Then I remembered that about this time in 2016 the OSU aviation students, otherwise known as the Flying Aggies, had parked the same plane at the same spot in order to spread the word about who they are and what they do.

I had a few minutes before I was supposed to be at work so I crossed Monroe, got out my D750 + 50mm lens, and took a few pictures. At first, like most people, I stood and shot from eye level and ended up with a couple images like this:

It’s not a bad shot and in some ways I kind of prefer it to the one I actually posted for this week because the trees and tents serve to create a somewhat unique and compelling story. Ultimately I decided that there was just too much going on in the frame, and with the colors of the tents being so similar to the surrounding scenery anyway I thought it would be best to just focus on the airplane. Basically, the one taken from eye level looked more like a snapshot whereas the one I decided to actually use felt more like an actual composition. I don’t know if I’m just grasping at straws here, and I might be, but I really do feel like there’s a substantive difference between the two.

I walked a bit closer to the plane, crouched down on the ground, and fired of a couple shots that I still wasn’t quite happy with. I was using f/1.8 to really bring the front of the plane in focus while getting a bit of foreground and background blur, which is difficult to do when your subject is so large and you’re standing several feet away, but something about the perspective just wasn’t working for me. Thankfully my D750 has a little flip-out screen which I rarely use, but when I need it oh boy does it ever come in handy. I literally set my camera on the sidewalk, angled it up, switched on Live View, popped the screen out, and voilà. I got the shot I was aiming for. The low angle and closer perspective helps isolate the plane and give it a sense of power and presence that the other shots lacked, and I’m happy with how the tail is perfectly visible but slightly blurry too.