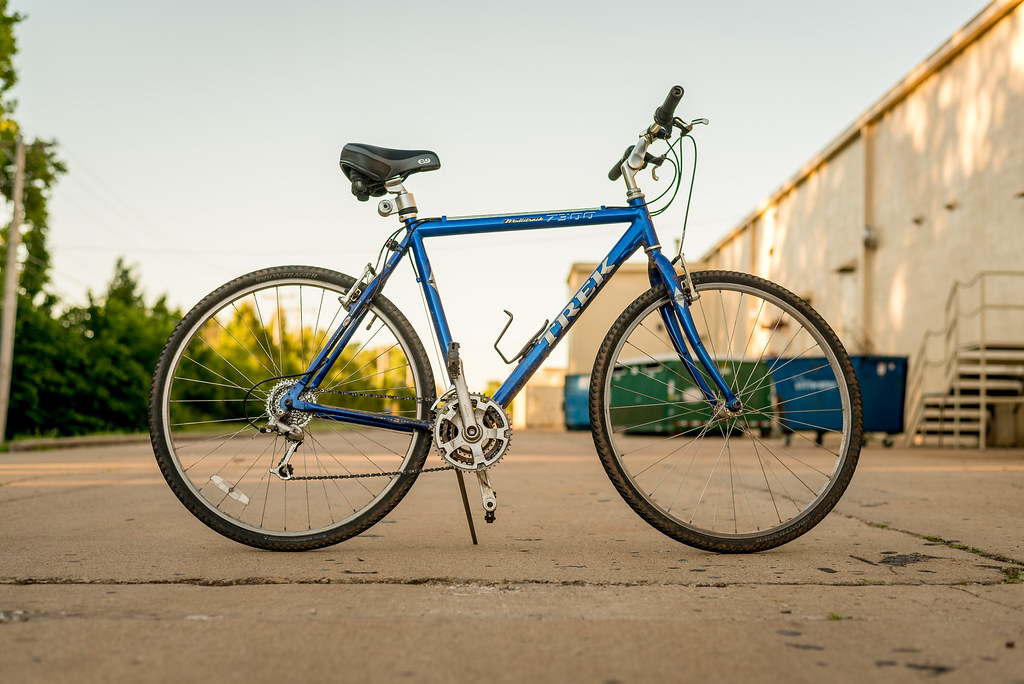 There’s a bit of a story behind this photo, and it all starts with my dad. When I was a kid my family lived in the northeast corner of Lincoln, Nebraska, and for a while we only had one car for the seven of us–mom, dad, and five kids. Fortunately we were close enough to the railroad where my dad worked that he would just ride his bicycle to get there and back. Every day, no matter the weather, my dad would leave the house early in the morning and ride down the sidewalk with his lunchbox sitting in a metal basket that he welded to the front of his handlebars. My whole life I can only recall one or two instances in which he took the car to work, partly because he wanted to make sure my mom had transportation for herself and the five of us but mostly because he saw riding his bike as a more practical solution when he only lived about a mile away from his job.

That mindset of practicality stuck with me over the years, and when I turned 10 and got an afternoon paper route I could be seen riding up and down the streets of our neighborhood slinging copies of The Lincoln Journal into driveways and porches of people whose last names I can still recall. Shortly after I turned 15 the Lincoln Journal merged with the morning Lincoln Star, which put afternoon carriers like myself out of work and scouring local businesses for any that needed able bodies to do whatever labor they required. The same week I stopped delivering the paper I got a job bagging groceries at the Food-4-Less down the road from my house and, following in my dad’s tire tracks, I rode my bike to work and back every day rain or shine.

By the time I graduated high school I still didn’t have a car, preferring instead to pedal my bike anywhere in town that I needed to go, though in my college years I soon succumbed to the allure of driving instead of cycling and for a while my bike languished outside the house my buddies and I rented while we earned our degrees at UNL. I still worked at the same grocery store and even occasionally rode my bike, but living farther away made it a little less practical though no less doable had I simply possessed the sense to leave my house a few minutes earlier. That’s college life for you, I guess :)

When I lived in Minnesota for five years after graduating I didn’t even have a bike. My dad, meanwhile, kept on pedaling to work and back until the day he retired.

Shortly after moving to Oklahoma my wife came across this blue Trek bike, the one featured as this week’s photo, at garage sale. It was almost brand new save for the seat which was in need of replacing, and my guess is that it belonged to a college student who, much like myself when I was that age, would have rather driven around instead of pedaling a two-wheeler. It was, I’ve told myself over the years, most likely a Christmas or Birthday present that got used a couple of times and then sat parked outside and unused. The seller was asking $10 and my wife eagerly snapped it up, and after spending $20 on a new seat I now had a new bike to ride around town. We only had one car at the time so, out of necessity, I started riding it to work just like my dad always did. My commute was about 2.5 miles and I found that I rather enjoyed it, as it gave me a few minutes of peace and calm right as the sun was rising and the world was coming to life each morning.

Now here we are, over seven years later, and I’m still pedaling the same blue bike to work almost every day. In fact, biking has become a pretty big part of our family life with weekly 10-mile rides around the lake where my wife and I tow our boys in trailers, as well as frequent family bike rides around the neighborhood just for fun. As far as using a two-wheeler for a commuting vehicle, I don’t have quite the same level of atmospheric fortitude as my father and prefer to drive if the weather is really bad, but pick any given weekday morning and chances are I’ll be riding my bike to work. Inspired by the pictures that Tyler Seims, the manager of our local bike shop here in town, takes with his Fuji camera I thought I’d try to get something similar with my blue bike. So while I was on my way to work one morning this summer I hopped off my bike while taking my usual shortcut behind a strip mall and shot this picture with my D750 + 50mm lens just as the sun was rising. It’s not the most glamorous location, nor is it the best-looking bike in town, but over the years it’s become a big part of who I am. So Dad, if you’re reading this, thanks for setting a good example. Who knows, maybe one day your grandsons will end up riding their bikes to work too :)