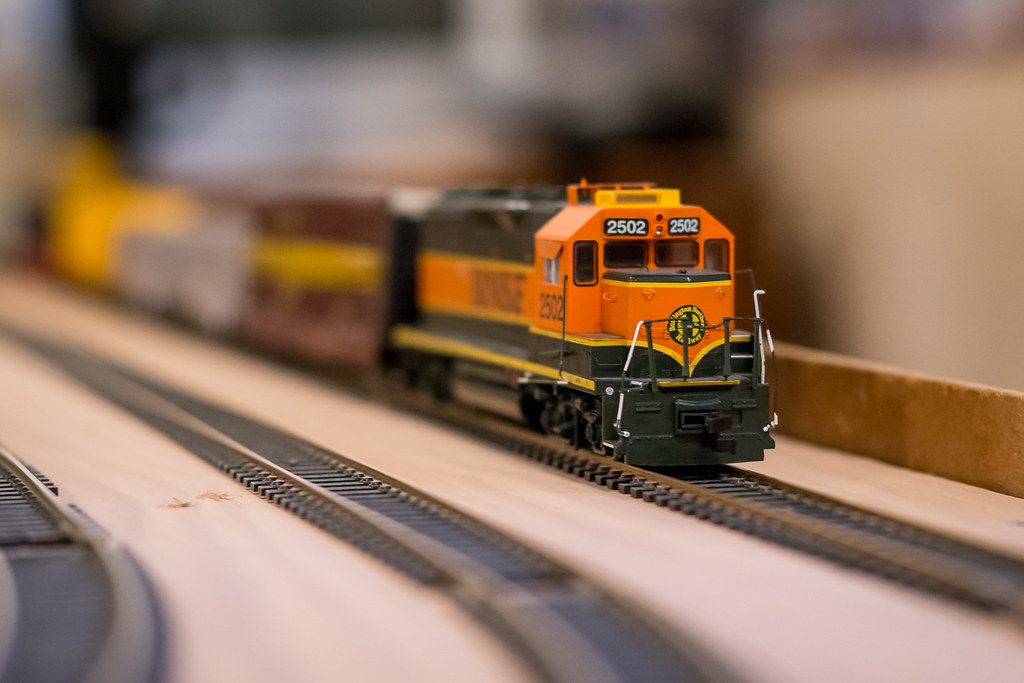 When I was a kid my dad was really into model trains, perhaps because he worked as a carman at Burlington Northern (now Burlington Northern Santa Fe) railroad, and I fondly remember the rather impressive H-O gauge set he built in the basement of our house in central Minnesota. When we moved to Nebraska in the early part of 1986 my parents bought a house that they still live in today, and its relatively modest size suited our rather large family quite well except when it came to having a model train set. There was simply no place to build one, given that every room in the house was occupied–that sort of thing tends to happen when you are raising five children under one room :)

My dad’s solution? Construct a 12′ x 12′ train set attached to cables and a winch so it can be raised into the ceiling. To this day I’m not sure how he actually did it, but if you go to my parents’ basement and look upwards you’ll see the underside of none other than the very same train set he built back when we were kids, just waiting to be lowered down and played with. It’s not much to look at compared to my uncle Ray and aunt Renee’s Nostalgia Trip set, but it’s still pretty neat.

My wife and I were back in Nebraska visiting my parents and other family members over Memorial Day this year and he had the set down on near the floor so some of the younger grandchildren could watch trains make their circuit around the tracks, and I grabbed my D7100 + 50mm lens to take a few shots of the models for posterity. This particular engine, which I clearly remember playing with when I was a kid, was still running and dutifully transporting H-O gauge cars around but I was able to catch it at a moment of rest when the operator on the other side of the set was momentarily distracted.

The light was dim so I needed to shoot somewhat wide open and use a shutter speed fast enough to eliminate the motion blur from hand-holding the camera, and even at f/2.8 I was only able to get a 1/60 second shutter. (And that was with the ISO clear up to 3200, which is a lot on that old D7100.) The result is a picture that does a decent job of capturing the fact that there’s a model train engine on some track, but I wish the depth of field was a bit wider to provide some context. It all happened in a matter of seconds though, and I didn’t want to tell the kids to stop having fun just so I could snap a few shots for my blog but it did make me want to revisit the scene (hopefully with a wider lens!) to capture a bit more of what makes this particular train set so unique.